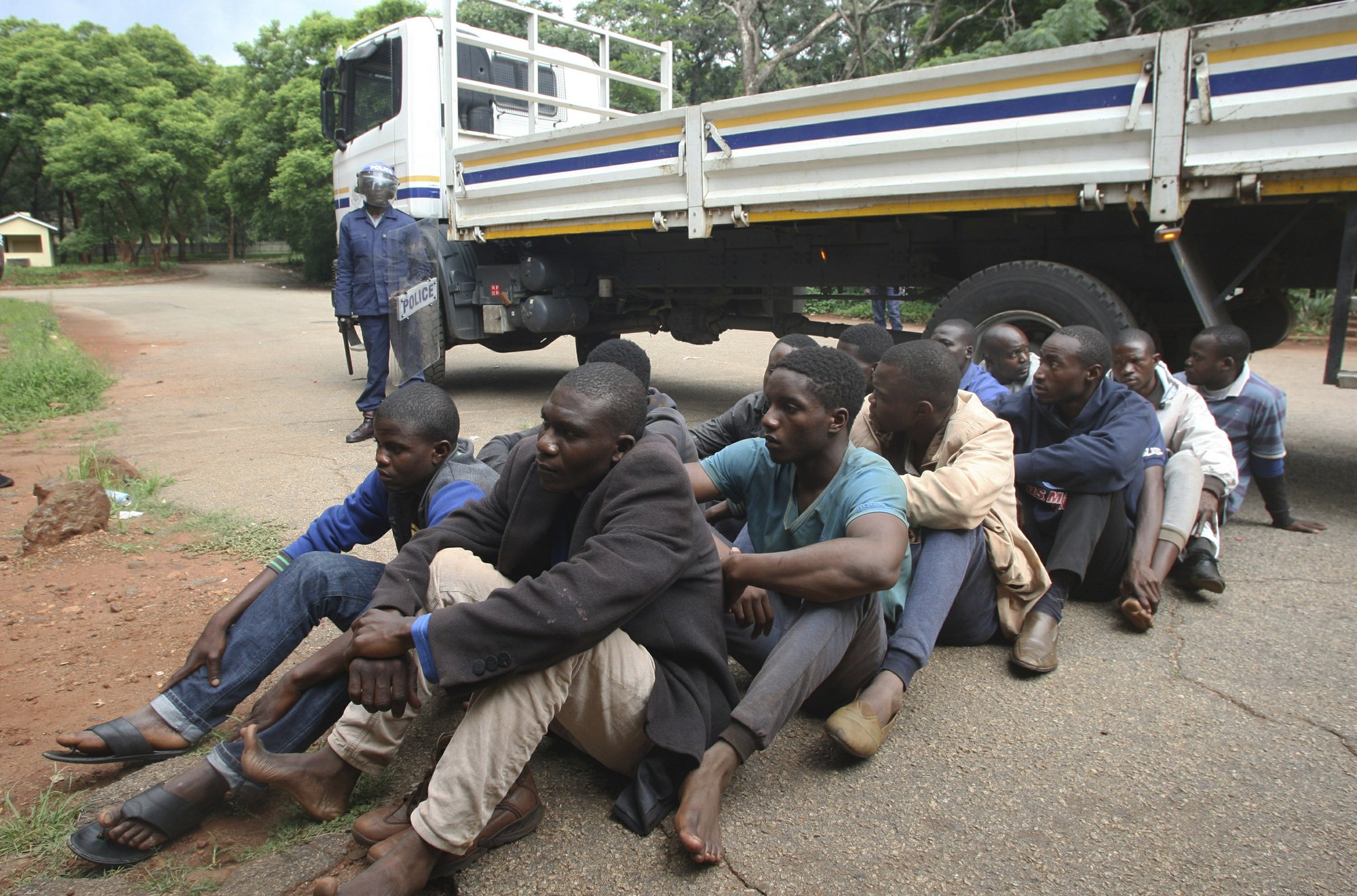 A policeman stands guard as some of the people arrested during demonstrations over the hike in fuel prices, make their court appearance at the magistrates courts in Harare, Zimbabwe, Wednesday, Jan,16, 2019. (Photo: AP)

Zimbabwe police armed with AK-47 rifles arrested a prominent activist and pastor on Wednesday, along with scores of others, in a harsh crackdown over protests against dramatic fuel price hikes in the economically shattered country.

As some hungry Harare residents reported being tear-gassed by police when they ventured out for bread, President Emmerson Mnangagwa denounced what he called “wanton violence and cynical destruction.” He noted a right to protest and said he understands the “pain and frustration,” but he appeared to side with authorities who blame the opposition for unrest.

Pastor Evan Mawarire was clutching a Bible when police bundled him into their car in the capital, Harare. He had organized what became nationwide anti-government protests in 2016 against mismanagement and then-President Robert Mugabe’s long stay in power.

“They are alleging that he incited violence through Twitter and other forms of social media in the central business district,” said Beatrice Mtetwa, the pastor’s lawyer.

Eighty-two people appeared in court in Harare on charges of public violence.

There were widespread reports of violence as Zimbabwe faced a third day of protests over what has become the world’s most expensive gasoline. This is the country’s worst unrest since deadly post-election violence in August that saw six people killed.

Zimbabwe’s largest telecom company, Econet, sent text messages to customers saying it had been forced by the government to shut down internet service.

“The matter is beyond our control,” it said. Service began to return in the evening.

Armed police and soldiers broke up groups of more than five people in Harare, while desperation for food forced some people to venture into the streets. But virtually all shops were closed.

Police fired tear gas after a crowd tried to overrun a shopping center that opened to sell bread. Soldiers with AK-47s took charge of the long line.

“This kind of life is unbearable, we have soldiers at fuel queues and now soldiers again are controlling the bread queue,” one man said. “Are we at war?”

He told The Associated Press that it was the only shop open. “I have no choice but to wait. People are hungry at home,” he said. He spoke on condition of anonymity out of concern about possible retaliation.

Other arrests were reported. A spokesman for the main opposition MDC party, Nkululeko Sibanda, said in a Twitter post that “party leadership” had been detained. “This is only deepening the political crisis in the country,” he said.

As Mnangagwa makes an extended overseas trip that will include a stop at the World Economic Forum in Davos, Switzerland, to plead for more foreign investment, former military commander and Vice President Constantino Chiwenga, a hardliner, is in charge at home.

Eight people were killed on Monday when police and military fired on crowds, according to Amnesty International. But Zimbabwe’s government said three people were killed, including a policeman who was stoned to death by an angry crowd.

The Zimbabwe Association of Doctors for Human Rights said in a statement that it had attended to 107 patients by late Tuesday afternoon, with injuries including gunshot wounds to the head. It said most cases were in Harare and Zimbabwe’s second city, Bulawayo.

International concern has been rising over Zimbabwe after a burst of optimism when Mugabe stepped down in late 2017 under military pressure.

The British minister for Africa, Harriett Baldwin, on Tuesday noted “worrying levels of violence” and urged restraint by Zimbabwe’s security forces. But South Africa’s foreign ministry said in a statement that “we’re confident measures being taken by the Zimbabwean government will resolve the situation.”

“Food fast running out in homes,” he added. Zimbabwe’s acting president was “silent.”