Zimbabwe receives its first batch of COVID-19 vaccines from China 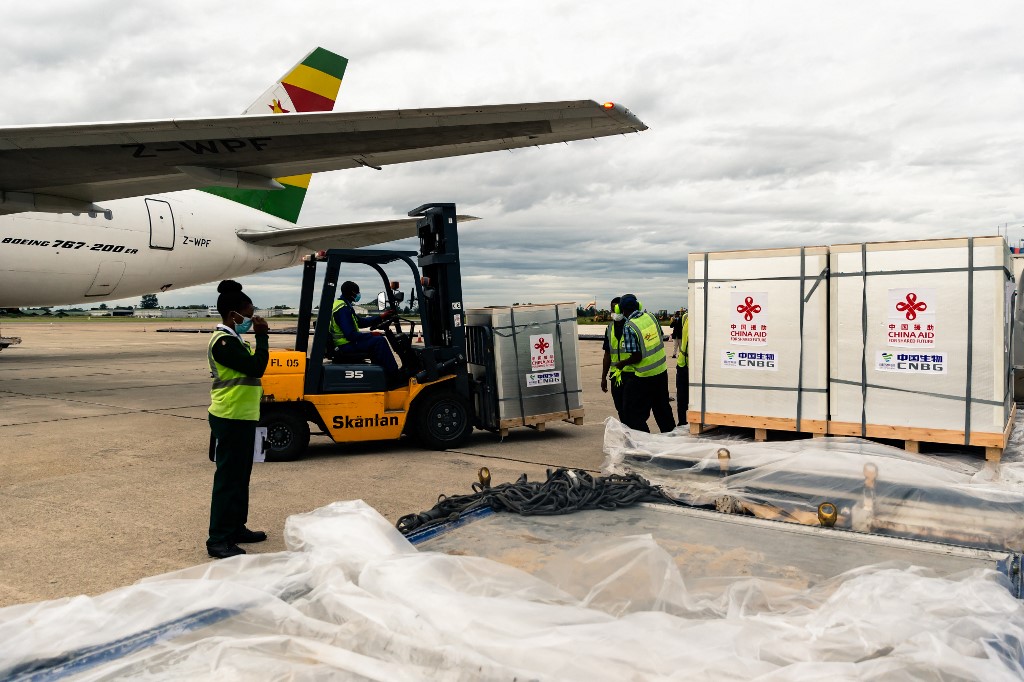 Workers offload part of a consignment of 200,000 doses of the Sinopharm coronavirus vaccine from China off an Air Zimbabwe aeroplane which has just landed on February 15, 2021 at the Robert Mugabe International Airport. (Photo: AFP)

The 200,000 doses of Sinopharm vaccines are the first batch that Zimbabwe has received as it steps up efforts to curb the spread of the COVID-19 pandemic.

The vaccines will cover all frontline health workers firstly, and the excess will be extended to vulnerable groups such as the elderly and those with underlying medical conditions, according to Zimbabwe's vaccine deployment strategy.

Zimbabwean Vice President Constantino Chiwenga, together with Chinese Ambassador to Zimbabwe Guo Shaochun, attended the handover ceremony at the airport.

Chiwenga, who is also the health minister, expressed gratitude to China for donating COVID-19 vaccines to the southern African country, saying the batch of vaccines is a timely donation as Zimbabweans are suffering from the pandemic.

"We receive this vaccine as it gave the hope to the nation that finally we may be on the verge of returning to some semblance of normalcy. That's what we are aiming to achieve," said the senior official.

"The vaccine also offers the possibility that our people who have borne the brunt of the economic ravages of the pandemic might finally turn a new page, following the unfortunate interruption to the economic activities that have been necessitated by the need to contain the spread of the virus," Chiwenga added.

Guo, for his part, said the donation represents the essence of the comprehensive strategic partnership of cooperation and the profound friendship between China and Zimbabwe.

"I am confident this donation will reinforce your position in the fight. Let's continue to march hand in hand and make the new year more fruitful for our bilateral relations," Guo added.

In an interview with Xinhua on Friday, Zimbabwean President Emmerson Mnangagwa also expressed his gratitude to China for its offer of COVID-19 vaccines, saying the donation is a testament to the long-standing friendship between the peoples of Zimbabwe and China.

"These vaccines are certainly providing a new light of positivity for the people of Zimbabwe in these tough times, (vaccines) which have been donated by the Chinese government and its people. A light at the end of a dark tunnel. We are most grateful for this lifesaving gesture," Mnangagwa said.

Zimbabwe is among the first three African countries to receive the COVID-19 vaccines from China, as Equatorial Guinea has received its vaccines on Wednesday, while Sierra Leone is expecting vaccines from the Asian country later in February.

Zimbabwe has already finalized a vaccine deployment strategy that would see at least 10 million people, or about 60 percent of the population, being inoculated.