Zimbabwe's Mnangagwa "humbled" after elected to second term as president 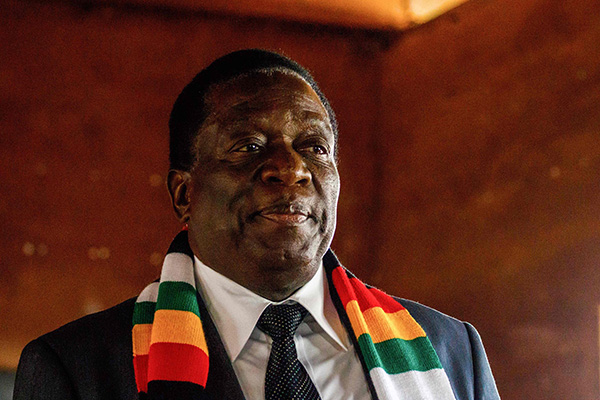 Zimbabwe's incumbent leader Emmerson Mnangagwa said he was "humbled" after narrowly winning the nation's presidential election Friday, while the opposition rejected the results.

His biggest rival, Nelson Chamisa from the opposition MDC Alliance, received 44.3 percent of the vote. The other 21 presidential candidates shared the remaining votes.

The streets of the capital city are quiet with a heavy presence of military and police after the announcement of the electoral results.

"Thank you Zimbabwe! I am humbled to be elected President of the Second Republic of Zimbabwe," Mnangagwa said on Twitter. "Though we may have been divided at the polls, we are united in our dreams."

"This is a new beginning. Let us join hands, in peace, unity and love, and together build a new Zimbabwe for all," Mnangagwa tweeted after a week which started with peaceful voting Monday but spiraled into deadly violence in Harare on Wednesday.

Mnangagwa, 75, is Zimbabwe's second executive president after former President Robert Mugabe, who assumed the position in 1987.

The MDC Alliance rejected the results of the presidential poll.

Party chairperson Morgan Komichi took the stage shortly ahead of the ZEC's announcement, saying the MDC Alliance "totally rejects" the results and he had not signed the election results. Police escorted him from the room.

Later Komichi said the vote was "fraudulent" and "everything has been done illegally." He said he had refused an electoral commission request to sign papers certifying Mnangagwa's win.

"We're not part of it," Komichi said, adding that his party would challenge the vote in court.

The ruling party garnered a two-thirds majority in parliament in the first vote since the fall of longtime leader Mugabe.

According to National Assembly Constituency results announced by the ZEC, the Zanu-PF party has already won a majority of 145 seats out of the 210-seat parliament while its nearest rival MDC Alliance won 63.