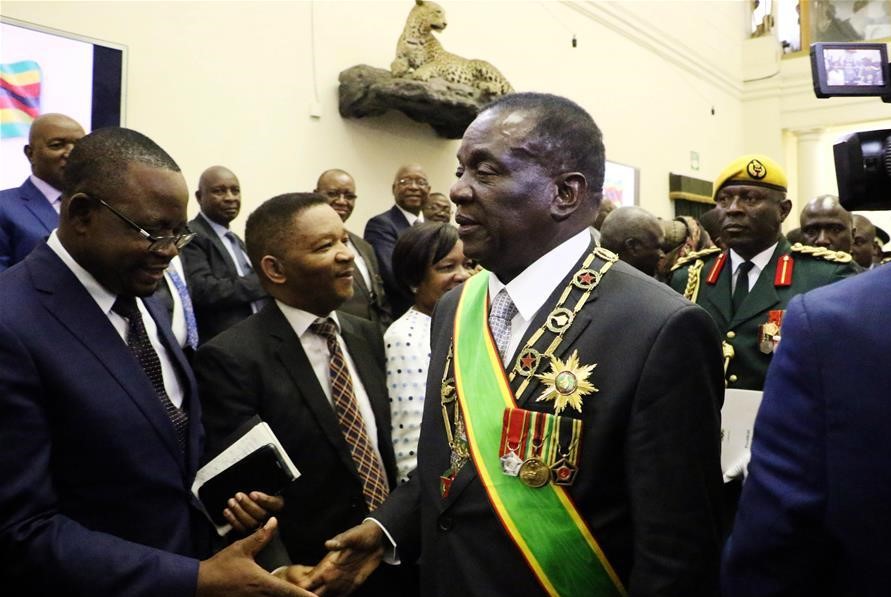 Zimbabwean President Emmerson Mnangagwa (C) shakes hands with a parliament member before delivering his first state of the nation address to open the first session of the ninth parliament in Harare, Zimbabwe, on Sept. 18, 2018. Emmerson Mnangagwa said Tuesday his government will not rush to re-introduce a local currency before economic fundamentals have been addressed. (Photo: Xinhua/Shaun Jusa)

HARARE, Sept. 18 (Xinhua) -- Zimbabwean President Emmerson Mnangagwa said Tuesday his government will not rush to re-introduce a local currency before economic fundamentals have been addressed.

He said the multiple currency regime introduced in 2009 will therefore remain in place until the negative economic fundamentals have been corrected.

The president said this in his first state of the nation address to open the first session of the ninth parliament.

There has been growing uncertainty in the market in the wake of reports of imminent return of the local currency and rising foreign exchange rates on the black market.

He said some of the economic fundamentals that need to be addressed first include a sustainable fiscal position, forex reserves of up to six months of import cover and sustainable consumer and business confidence.

"These economic fundamentals are yet to be met to justify introduction of our own currency," Mnangagwa said.

He said the government will institute measures to stabilize the macro-economic environment, reduce budget deficit and grow the economy.

To address biting foreign currency shortages which have affected importation of critical imports, Mnangagwa said government had negotiated lines of credit worth 500 million US dollars to meet foreign currency requirements for businesses.

Disbursement of the funds will start this week, he said.

He said his government will also put in place a comprehensive plan to accelerate clearance of the country's 1.8 billion US dollars arrears to the World Bank and the African Development Bank.

Zimbabwe has a huge external debt of roughly 11 billion US dollars which has stifled its efforts to attract fresh capital from multilateral financial lenders to help revive its economy.

He said the government will review bilateral investment promotion and protection agreements (BIPPAs) to attract investment from around the world.

"Although we have made progress over the last 10 months, some challenges, however, still continue to face our country's economy. I urge us all, the executive, legislature, private and public sector alike to be partners in bringing about a new economic order, economic growth and job creation," he said.

He vowed to stamp out corruption and to improve efficiency in the public sector, saying bureaucracy and red tap will not be tolerated.

The government will also seek to revamp underperforming state owned entities so that they contribute meaningfully to the economy.

Meanwhile, the president set the parliamentary legislative agenda and said several bills mainly focusing on improving economic efficiency will be tabled before parliament.

The parliament will also speed up alignment of outstanding laws to the new constitution that was adopted in 2013.

Mnangagwa's address was boycotted by legislators from the opposition MDC Alliance who stormed out of parliament as soon as he started to make his speech.

The MDC Alliance has rejected Mnangagwa's victory in the July 30 poll despite the constitutional court affirming the victory.