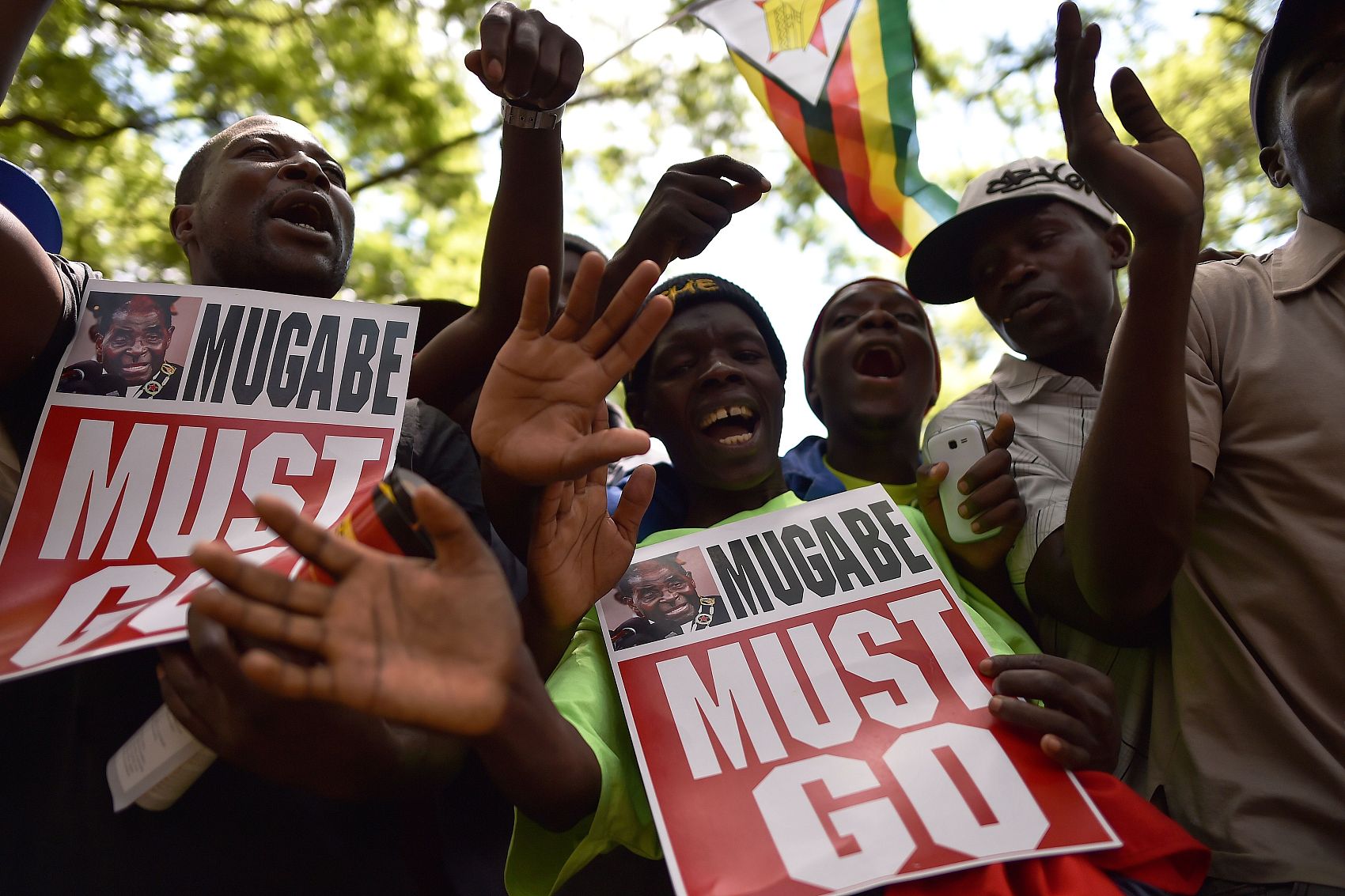 Anti-Zimbabwe President hold placards during a gathering at Unity square, on November 21, 2017 in the capital Harare, praying and asking for Mugabe's impeachment (Photo: VCG)

Zimbabwe's Parliament launched impeachment proceedings against President Robert Mugabe on Tuesday, with both ruling party and opposition support, while the recently fired vice president said the world's oldest head of state should acknowledge the nation's "insatiable desire" for a leadership change and resign immediately.

The statement by Emmerson Mnangagwa added to immense pressure on the 93-year-old Mugabe to quit after nearly four decades in power, during which he evolved from a champion of the fight against white minority rule into a figure blamed for a collapsing economy, government dysfunction and human rights violations.

The ruling ZANU-PF party began impeachment proceedings against Mugabe after its Central Committee voted to oust the president as party leader and select Mnangagwa as his replacement, a move that eventually could allow the former vice president to become head of state. Mnangagwa served for decades as Mugabe's enforcer, with a reputation for being astute and ruthless, more feared than popular.

Crowds rallied outside Parliament, dancing and singing. Some people placed photos of Mugabe in the street so that cars would run over them. Opposition leader Morgan Tsvangirai of the MDC party said the culture of the ruling party "must end" and everyone must put their heads together and work toward free and fair elections.

The impeachment motion was introduced by the ruling party and seconded by the opposition MDC. Parliament then moved into the next stage of forming a committee to investigate the allegations against Mugabe, including that he "allowed his wife to usurp constitutional power" and that he is "of advanced age" and no longer has the physical capacity to run the government.

"The people of Zimbabwe have spoken with one voice and it is my appeal to President Mugabe that he should take heed of this clarion call and resign forthwith so that the country can move forward and preserve his legacy," Mnangagwa said in his statement, after more than a week of silence.

Mnangagwa, who fled the country and has not appeared in public during the past week's political turmoil, said Mugabe had invited him to return to Zimbabwe "for a discussion" on recent events. However, he said he will not return for now, alleging that there had been plans to kill him at the time of his firing.

"I will be returning as soon as the right conditions for security and stability prevail," said Mnangagwa, who has a loyal support base in the military. "Never should the nation be held at ransom by one person ever again, whose desire is to die in office at whatever cost to the nation."

Zimbabwe's polarizing first lady, Grace Mugabe, had been positioning herself to succeed her husband, leading a party faction that engineered Mnangagwa's ouster. The prospect of a dynastic succession alarmed the military, which confined Mugabe to his home last week and targeted what it called "criminals" around him who allegedly were looting state resources — a reference to associates of the first lady.

Mnangagwa was targeted by U.S. sanctions in the early 2000s for undermining democratic development in Zimbabwe, according to the Atlantic Council, a U.S.-based policy institute. However, J. Peter Pham, an Africa expert at the council, noted that some Zimbabwean opposition figures have appeared willing to have dialogue with Mnangagwa in order to move the country forward and that the international community should consider doing the same.

"We're not saying whitewash the past, but it is in the interests of everyone that Zimbabwe is engaged at this critical time," Pham said in a statement.

Regional leaders continued efforts to find a solution to the political turmoil, with South Africa's state-run broadcaster reporting that the presidents of South Africa and Angola would travel to Zimbabwe on Wednesday to meet with "stakeholders" in the political crisis, including Mugabe and the military.

Impeachment proceedings began days after huge crowds surged through the capital, Harare, to demand that Mugabe quit. The ruling party had instructed government ministers to boycott a Cabinet meeting that Mugabe called for Tuesday morning at State House, the president's official residence, and instead attend a meeting at party headquarters to work on the impeachment.

Mnangagwa said he was aware of the move to impeach Mugabe. Though unpopular in some parts of Zimbabwe, the former vice president called for unity and appeared to embrace the prospect of taking over power.

"I will not stand in the way of the people and my party," he said.