WORLD Zimbabwe says ‘nothing will stop’ election after rally blast

Zimbabwe says ‘nothing will stop’ election after rally blast 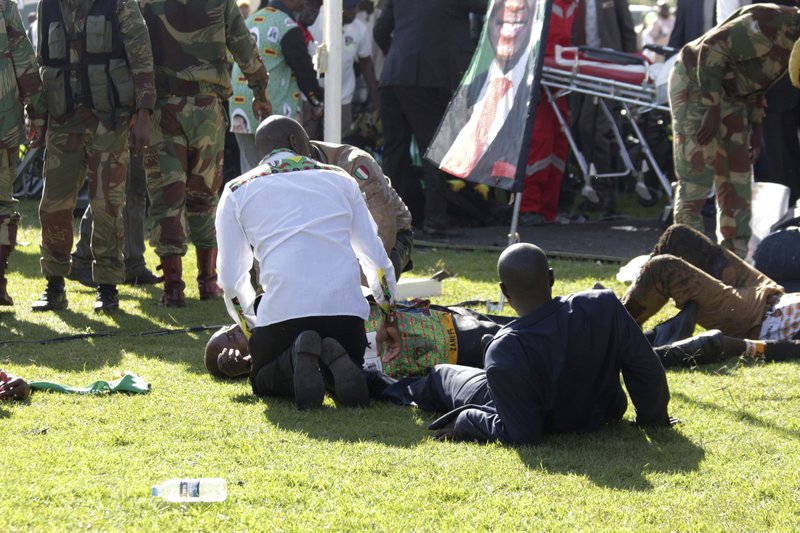 The explosion at a campaign rally for Zimbabwe’s president that injured 49 people will not delay next month’s historic election, officials said Sunday, as a vice president called the attack “terrorism” and said any frightened candidate would be provided with protection.

“Let me make it very clear that nothing will stop the elections in Zimbabwe, nothing at all,” Vice President Constantino Chiwenga, who was lightly bruised in Saturday’s blast, told a rally outside the capital, Harare.

“That act of terrorism that happened in Bulawayo is nothing,” he added. But if contenders are “afraid and scared, we will give them security.”

Zimbabwe’s presidential candidates are not normally provided with security by the government. The protection at Chiwenga’s rally appeared no heavier than normal, with no security checks for those attending.

State media have called Saturday’s blast in Bulawayo, an opposition stronghold, an assassination attempt. President Emmerson Mnangagwa was unscathed. Police on Sunday said an investigation continued and a “substantial reward” was offered for information.

Mnangagwa said the explosion occurred just “inches” from him. Dramatic footage showed him walking off the stage and into a crowded tent where the blast occurred seconds later, sending up smoke as people screamed and ran for cover.

Mnangagwa later pointed out he’d had numerous attempts on his life in the past, saying he was used to them by now. He has openly joked about them at rallies.

The president “will not be driven by vengefulness or a spirit of retribution,” his spokesman, George Charamba, told the state-run Sunday Mail newspaper. “Until the investigators pronounce themselves and present the evidence for arrest and prosecution, no one should ascribe motive or blame.”

Mnangagwa told state broadcaster ZBC, without elaborating, that those responsible must have come from “outside Bulawayo.” He added: “I can assure you these are my normal enemies.”

The president has vowed to hold a free and fair election, the first since longtime leader Robert Mugabe stepped down in November under military pressure. Allegations of violence and fraud marked past votes.

A record 23 people have filed to run for president in the July 30 election.

Mnangagwa, a longtime Mugabe ally whose firing as his deputy after a ruling party feud led to the transfer of power, is under pressure to deliver a credible vote that Western countries see as key to lifting international sanctions.

He has invited election observers from the United States, the European Union and elsewhere for the first time in 16 years. Mugabe rejected Western observers, accusing them of bias.