WORLD Zimbabwean military: significant progress has been made

Zimbabwean military: significant progress has been made 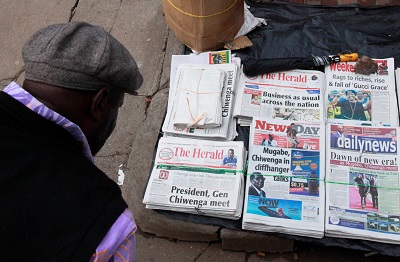 A man reads the headlines of newspapers for sale on a street in Harare, Zimbabwe, November 17, 2017. (Photo: Reuters)

Johannesburg (People's Daily app) - The Zimbabwe Defence Forces (ZDF) released a new statement on November 17 on Zimbabwean national media, saying "significant progress has been made" in their operation.

ZDF added that they have accounted for some of the criminals around President Robert Mugabe in order to bring them to justice since they were committing crimes that caused social and economic suffering in the country while others are still at large.

ZDF said they were currently engaging with the Commander-in-Chief President Mugabe "on the way forward". They said they will advise the nation of the outcome as soon as possible.

"While we appreciate the enthusiasm by certain individuals and groups within society, we want to make it clear that they should not purport to be speaking on our behalf," the statement added."We will periodically make press releases to keep the public informed of developments in the country. "

The ZDF commended the nation for remaining patient and peaceful as they carry out the operation.