Zimbabweans to cast their first vote in the post-Mugabe era 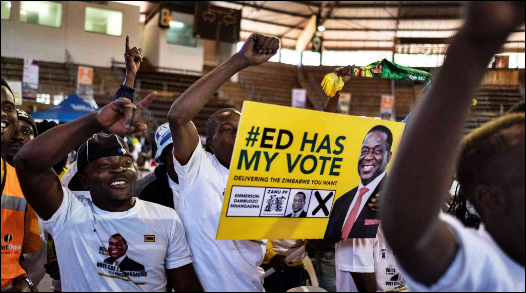 Monday will be a massively significant day for Zimbabweans. About 5.5 million citizens who've registered to vote will cast their ballot in an election where Robert Mugabe, the country's leader since independence, is not a candidate. His ousting last November has opened up democratic space and ushered in new freedoms that have seen at least 130 political parties emerge in the last seven months.

Fifty-five of them are participating in the election at the end of the month, which includes a record 23 presidential candidates running for the presidency.

Despite the big field, the election is effectively a two-horse race: The ruling ZANU-PF, now under the leadership of Mugabe's former deputy, Emmerson Mnangagwa, and a coalition of parties under the banner of the main opposition MDC, led by a newcomer, Nelson Chamisa, who replaced the late Morgan Tsvangirai in February.

Mnangagwa has departed from the policies of his predecessor, allowing his political rivals to campaign freely, particularly in his party's rural strongholds and inviting Western observers – including previously banned EU, Commonwealth and US missions – to monitor the elections.

He has also made the economy his top priority and has reportedly attracted billions in foreign investment and presided over a series of events to re-open shut down businesses.

"Clearly Mnangagwa and ZANU-PF are alive to the fact that after years of company closures, job losses and erosion of financial savings, hard-pressed Zimbabweans are likely to vote for a candidate that will restore economic sanity," said Tawanda Mashereni, a retail shop owner.

"That's why the new president has been on a recent spree to launch new projects and talk about the jobs that will be created. He's trying to show those who've lost their jobs or those who have never been employed that he's the right choice," he said.

But critics argue the highly publicized groundbreaking ceremonies and investment projects are just for show.

Barnabas Thodhlana, a veteran media practitioner, said, "there is no tangible investment to speak of. Even under Mugabe we heard of these mega deals and were promised Heaven on Earth."

He added that no serious investor would take the plunge on the eve of an election, especially one that's too close to call.

The 40-year-old opposition leader is popular among young people and claims to offer real transformation. He has promised to resolve a long-running cash crisis within weeks if voted into office.

"I hope they can do something about the cash situation because we suffer. We can't get our own money which we worked for," said Georgina Choto, a pensioner.

The MDC said Mnangagwa was Robert Mugabe's right-hand man and is unlikely to offer anything different.

"He has retained the same ministers and officials and so we expect that their performance will be pretty much the same," said an unconvinced Chris Mutede, a Harare resident.

However, Mnangagwa has charmed other sections of society, in particular, the previously ostracized white community. Former white farmers have been invited to partner with new black landowners and those who lost farms will be compensated.

"Going right back to his inauguration in November last year, he placed a high agenda on dealing with the outstanding issue related to white farmers who'd been evicted. He's set himself up as going to deal with this issue and the fact that he is now talking about it before campaign is concluded clearly indicates that trajectory," said President of the Commercial Farmers Union, Ben Gilpin.

With little to choose between the main contenders, the influential military may tip the scales in the incumbent's favor.

"The army was able to do what the late Morgan Tsvangirai was unable to do, and that is to get Robert Mugabe out of office and the military right now is behind Emmerson Mnangagwa and obviously they will be a factor in the election," said Thodhlana.

The defense forces insist they have a direct role in the election and will respect its outcome. That stance has boosted confidence ahead of a poll whose conduct matters as much, if not more, than the result.

A free, fair and credible election is critical to cementing Zimbabwe's re-engagement with the international community, with which it's been estranged for the better part of the last 20 years.

"The mood is changing, people are now more focused on Zimbabwe," noted economist Vince Musewe, who is engaged with a number of visiting delegations scouting for investment opportunities. "It's now just a matter of capitalizing on that renewed interest by doing the right things.”

The country's citizens are desperate to move on from a lost two decades and see July 30 as the first day of a new Zimbabwe, when they can take their first step into the future.