Why does Kenyan runner's feat inspire?

Editor's note: David Lee is a consultant and author based in Beijing who focuses on energy, health, international politics and international development. The article reflects the author's opinions, and not necessarily the views of CGTN. 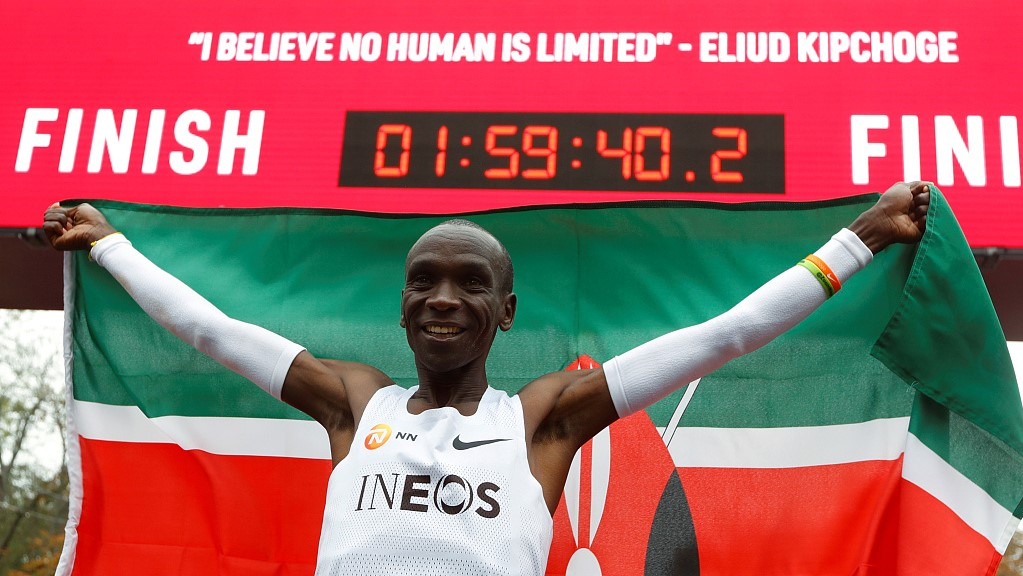 Kenya's Eliud Kipchoge made history over the past weekend by becoming the first person ever to complete a marathon within two hours. To be exact, the Olympic champion covered the entire distance of 42.195 kilometers in 1 hour, 59 minutes and 40.2 seconds.

Of course, Kipchoge completed the feat under tightly controlled conditions. At the INEOS 1:59 Challenge, an event specifically set up to make the impossible happen, particularly in full support by the amazing team of pacemakers, Kipchoge's run in Vienna was no regular marathon race. Therefore, the world record of under two hours will not be ratified by the International Association of Athletics Federations (IAAF), the governing body of the sport.

Nevertheless, Kipchoge's feat inspires China and the world. Why? Because it's a great feat by a tremendous athlete, who has proven many times more that he has no equal in this sport. But more importantly, his feat belongs to humanity, which, despite so many weaknesses and shortcomings, remains keen to be "higher, faster and stronger."

Thanks to Kipchoge, the world enjoys a triumphant moment. At a time of tremendous scientific and economic developments, there is all the more reason to believe in unlimited possibilities unleashed by the human spirit. 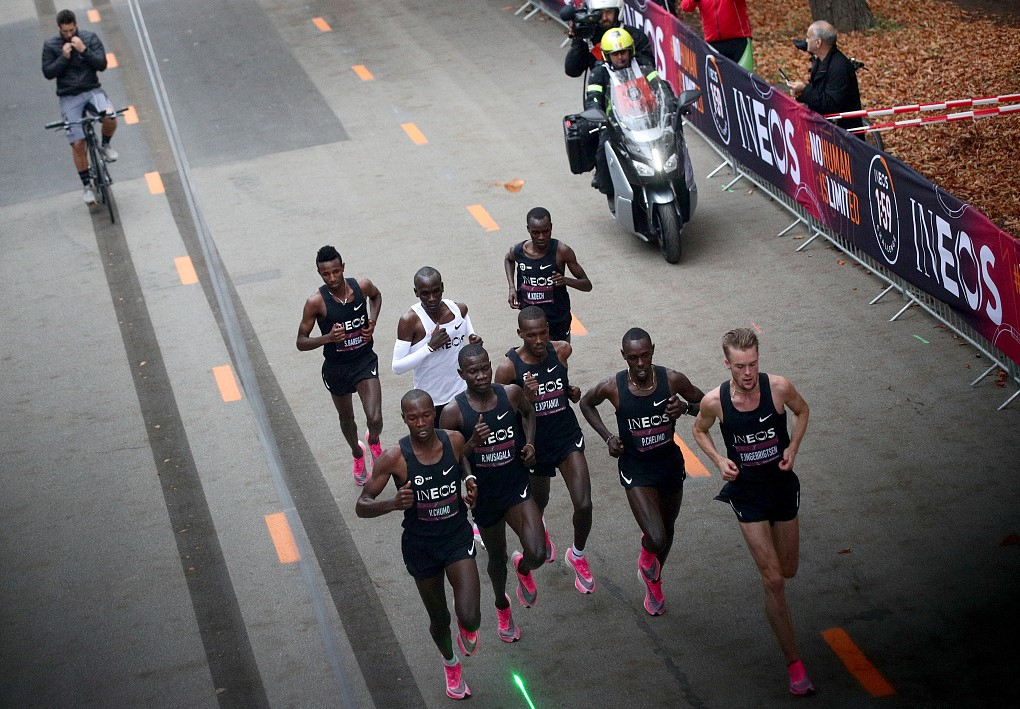 Eliud Kipchoge (C) of Kenya runs among seven pacemakers in his attempt to break the two-hour marathon barrier for human in Vienna, Austria, October 12, 2019. /VCG PhotoMore importantly, the human desire to progress and improve is not a selfish drive for mere personal gains, because Kipchoge owes his success to many favorable conditions, particularly created by his 41 pacemakers. The pacemakers themselves are top athletes, winners of continental and world championships. Their dedication made it all happen for Kipchoge. At the end of the day, human progress must be a result of teamwork.

The pursuit of personal development and betterment backed by teamwork and camaraderie represents the true charm of sport. Therefore, an average person, a fan, or an enthusiast can enjoy and benefit from sport, even if he or she has no hope of winning any championship, gaining fame or financial success.

Sport has a positive energy. Augmented by tremendous personal and team efforts, sport has an even bigger inspirational effect. A healthy and progressive society needs such an inspiration.

Kipchoge's feat in Vienna quickly made headlines in major Chinese media outlets. The Chinese population has been truly inspired by the Kenyan. Or, in a wider sense, Chinese are quickly becoming real fans of the running sport, in various forms ranging from leisure jogging to half-marathon and to a more demanding full marathon.

The running sport in China has grown together with the country's reform and opening-up process. In 1981, the first edition of Beijing International Marathon took place, starting from China's iconic Tiananmen Square. At that time, only 86 athletes took part. Today, international marathon competitions take place in numerous cities across the country, as tens of thousands of athletes and fans participate for sporting glory, fitness, fun, and even charity advocacy.

When marathon meets economics, a rule of thumb is that a nation that passes the threshold of 5,000 US dollars GDP per capita will benefit from "a golden consumption cycle" stimulated by people's purchasing power as the population spends and enjoys the sport.

China shows the best case wherein sports and socioeconomic development reinforce each other. According to the Chinese Athletics Association, more than 85 percent of all Chinese cities had organized large-scale running events as of the end of 2018. Today, a major marathon event in a Chinese city is like a local festival, celebrated not only by local populace, but also by friends from other Chinese cities and overseas.

As Kipchoge's feat inspires, a key question is how to replicate the success of China – that is, the success to link sport with economy and let them reinforce each other in a way that truly benefits the population physically and spiritually – across the Global South.