OPINIONS Who is 'the real sick man'? China or biased author?

Who is 'the real sick man'? China or biased author? 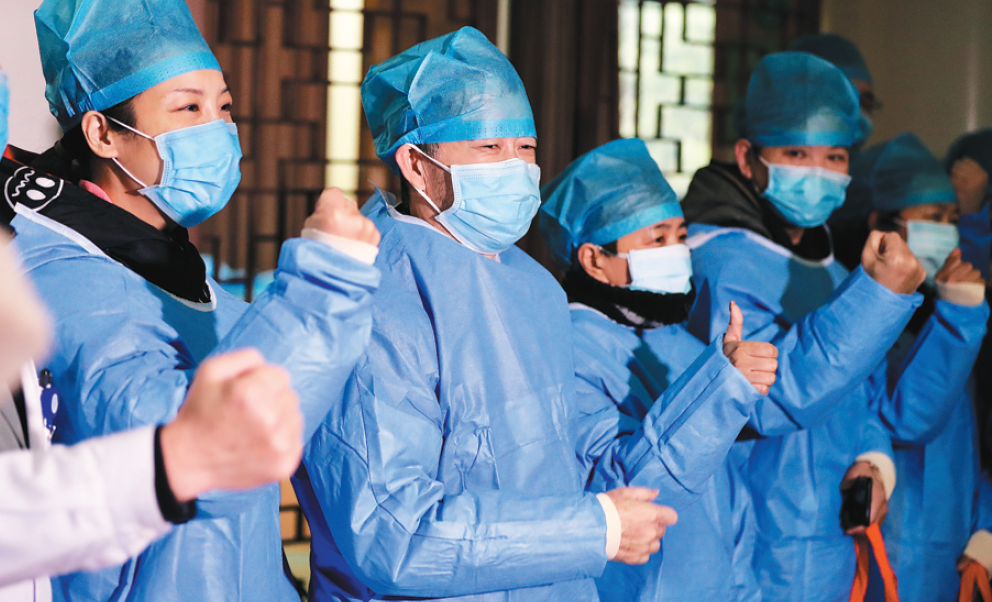 Patients who have recovered from the novel coronavirus gesture to show their determination in the struggle against the outbreak at Hubei Provincial Hospital of Integrated Chinese and Western Medicine in Wuhan on Thursday. (Photo: China Daily)

An opinion column published Monday in The Wall Street Journal, headlined "China is the real sick man of Asia", is not only a manifesto for the author's deep-rooted anti-China sentiment, but also demonstrates his lack of empathy and compassion as a human being.

The headline of the piece itself sounds astonishingly racist－calling China "the real sick man of Asia" is by no means acceptable in today's civilized world. The expression is also resented by the Chinese, whose country has suffered from past foreign invasions. Worse, the sarcasm, prejudice and bias expressed are exorbitant.

I could not help but ask, "Who is sick?"

The opinion was written by Walter Russell Mead, the James Clarke Chace Professor of Foreign Affairs and the Humanities at Bard College, the Ravenel B. Curry III Distinguished Fellow in Strategy and Statesmanship at the Hudson Institute, and the Journal's Global View columnist.

The article shows the writer's inability to see the big picture of what is happening in Wuhan, capital of Hubei province, and beyond, as well as his denial of China's contributions as a responsible member to the world community and to a shared future.

Prevention and control of the epidemic are the top priorities for China. The country is taking serious measures everywhere, including the lockdown of the outbreak's epicenter Wuhan and postponing the resumption of work in major cities across the country. The author, however, chose to ignore those facts.

Instead, he looks to find fault with government procedures and raises the prospect of the collapse of China's economy and its financial markets. Mead writes that "some would expect a return of unipolarity if the only possible great-power rival to the US were to withdraw from the game".

The professor fails to provide readers with any humanitarian insights nor share instructive research as a so-called distinguished scholar should.

Instead of carefully checking data on how seriously the Chinese government has worked to contain the outbreak and cure the infected, Mead jumps to conclusions by alleging that "Chinese authorities are still trying to conceal the true scale of the problem".

Did Mead cross-check his sources?

On Jan 30 in Geneva, Switzerland, Tedros Adhanom Ghebreyesus, director-general of the World Health Organization, addressed the global media on the outbreak after returning from China, where he met with Chinese leaders.

They discussed cooperation on containment measures in Wuhan and virus prevention in other areas. China agreed to conduct studies with the WHO on the severity and transmissibility of the virus and to share data and biological material.

"China has been completely committed to transparency, both internally and externally, and has agreed to work with other countries that need support," Tedros said. "I will praise China again and again, because its actions actually helped in reducing the spread of the novel coronavirus to other countries. …We shall tell the truth, and that's the truth."

It also should be noted that the fight against the coronavirus is a global one. As China's Ambassador to the US Cui Tiankai said recently at a forum at the University of California, San Diego: "We live in a shared community where all of us are interlinked and interdependent. Countries must join hands to cope with the difficulties and challenges they face."

Some American scientists have already headed to the front lines to fight the virus. The "virus hunter "Ian Lipkin, a professor of epidemiology and the director of the Center for Infection and Immunity at Columbia University's Mailman School of Public Health, went to the epicenter on Jan 29.

After helping fight the severe acute respiratory syndrome outbreak with his Chinese counterparts in 2003, Lipkin is known in China as a front-line trooper who shared his expertise to assess the state of the disease and helped orchestrate a strategy for virus-containment and curtailing infections and fatalities.