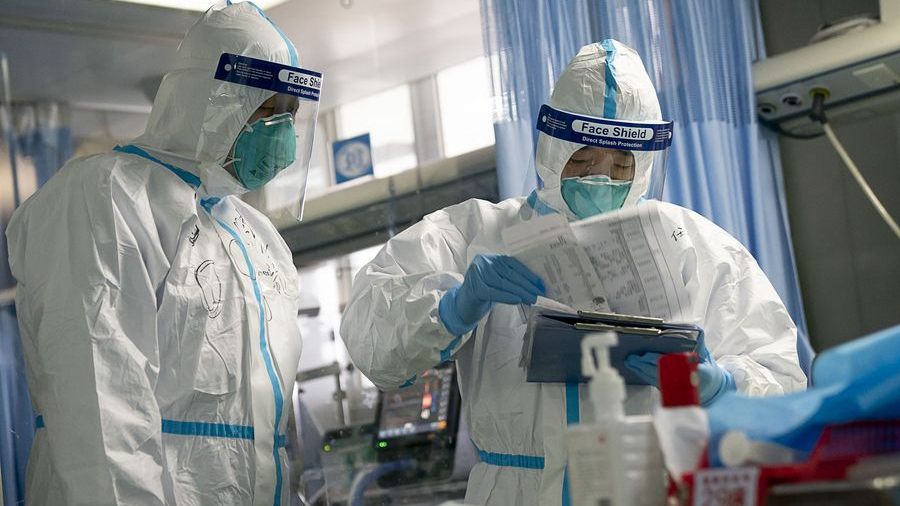 WELLINGTON, Feb. 18 (Xinhua) -- People across New Zealand are showing their support for China's battle against the COVID-19 in different ways.

George Chow, president of New Zealand Friendship for Peace Association, was impressed by the huge support they received during a public event at Auckland's waterfront Princess wharf on Valentine's day.

"The 'China Stay Strong' public event was decided within just three days. This is our way to support our motherland. Not only are we grateful to the local council who approved the event in a short notice, also a great number of local people who came all the way across the city to join us in the event and showed their love and support," George Chow told Xinhua.

A group of school girls from the Auckland Girls' Choir came together to sing a song specially written and composed by the choir's founder to the people of Wuhan.

The song, titled "Together with You" is aimed to lift the spirits of those in Wuhan and the rest of China in the fight against the novel coronavirus, sending a message of love and hope, and solidarity between the people of Auckland and Wuhan.

Founder of the Auckland Girls' Choir, Leonie Lawson has just celebrated her 89th birthday. She wrote the music and lyrics as a message of hope and encouragement, a song for the people of Wuhan from the city of Auckland, New Zealand.

"I know the Chinese people have very good fighting spirit when they face something difficult. So the song I wrote is a very forward, uplifting and positive piece. Saying we must stand up and fight this together, we are with you Wuhan," said Lawson.

It only took the choir three days to put everything together. "I thought that there was more we could do to lift people's spirits," said Jeanette Chan who helped to initiate this project, "We had very strong support from the girls and their parents to do this. Our founder immediately started writing the music and lyrics."

Many of the girls cancelled their after-school activities and sports events to practice and record this song.

Michelle Lee is one of the girls in the choir. She said, "We shall overcome, stay strong. We are with you. Beijing Jia You, Wuhan Jia You".

Chairman of the choir Robert Lee are proud of the girls. "It was so important that I felt this should be done straight away. There was no point in waiting. All the girls were so eager to do this song, and the Choir responded. It's great to see young girls stepping forward to do this."

The Wellington public is also showing their support for China. Students at the Scots College in Wellington performed Maori ceremonial dance "Haka" to support China in fighting the novel coronavirus epidemic.

At Wellington's waterfront and in Lower Hutt Saturday, people were holding placards to support China. "Kia Haka!" (which in the Maori Language means be brave), and "Fight Virus China" became popular in the local streets.

"We were surrounded by people of all ethnic origins. Volunteers, visitors, families and young kids, all showed their support for the fight against the COVID-19. It was truly a touching moment when you saw such solidarity around you," said Qin.