“President Xi kindly took my hand. His hands are thick and warm”, said Sun Guanfa, recalling Xi’s visit to his home on May 20, 2019. 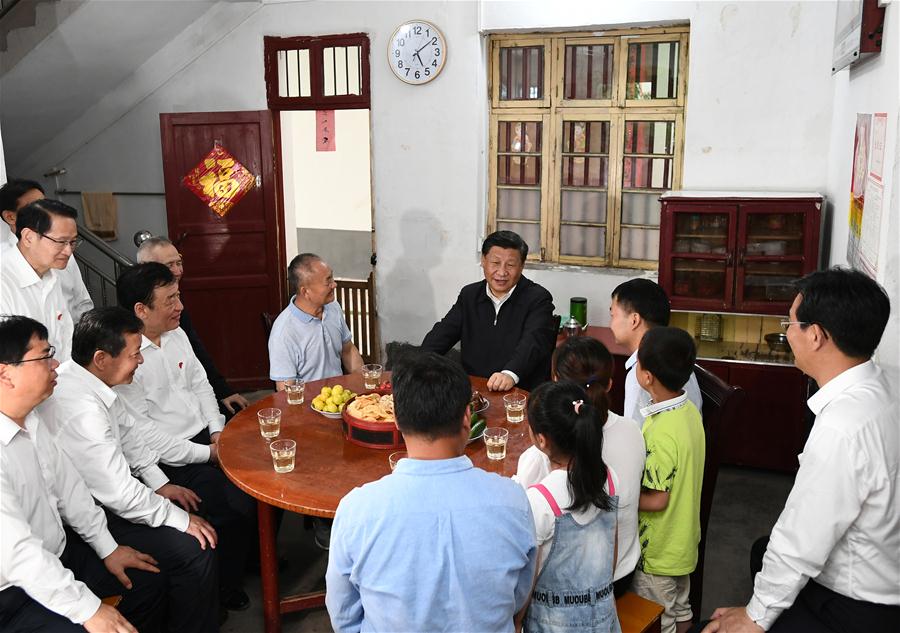 President Xi Jinping visits Tantou Village in Yudu County, Ganzhou City, during an inspection tour of east China's Jiangxi Province on May 20, 2019. At the home of veteran Sun Guanfa, a descendant of a Red Army martyr, Xi chatted with Sun's family. (Photo: Xinhua)

Sun, a 70-year-old villager, was still thrilled when he talked about his meeting with Xi during his inspection in Tantou, an old village in Yudu County of East China’s Jiangxi Province.

Sun Guohua, Sun Guanfa’s son, said “President Xi’s words warmed my heart” when he recalled the scene that Xi opened their refrigerator and cared about their meals.

In the kitchen of Sun’s house, Xi also looked at the gas container, rice tank and oil pot, asking Sun’s family about their livelihood in detail.

Sun Guanfa told Xi that each container of gas cost 100 yuan ($14), which could be used for a month, and the electricity charge was about 200 yuan a month while the cooking oil was extracted by themselves.

Sun Yan, Sun Guanfa’s daughter, said that Xi was really kind and encouraged them to study hard when he took a close look at their certificates of merit on the wall of the living room.

During the chat with Xi and local cadres in the living room, Sun said as a descendant of a Red Army martyr, he joined the army in 1970 and always wanted to defend the country. Xi extended his appreciation, which moved Sun a lot.

Before the meeting in the living room, Sun Guanfa briefed Xi about the toilet in the backyard, adding that his toilet was self-built and of medium level in the village, while toilets in many villagers’ houses were built better.

When Xi asked about subsidies for building toilets, Sun said 2,000 yuan for impoverished families and 1,000 yuan for normal families, and the cost of building a toilet was 2,800 yuan to 3,000 yuan.

Lots of changes have happened during the past years in Tantou. “Drinking water and toilets are not problems any more. Water becomes clearer. Mountains become greener. Scenery becomes more beautiful,” Sun said.

“We now have more energy and greater goals”

Sun told Xi that his family got impoverished owing to his wife’s tumor treatment, which brought them the debt of 200,000 yuan, but they didn’t lose heart.

“My son’s salary has risen recently and my wife works in the poverty alleviation workshop nearby. I told President Xi that our family income of 2019 would be 100,000 yuan, while now it will be twice that.”

Sun and other villagers have also benefited a lot from the prosperity of tourism in Tantou. In 2019, Tantou Rural Tourism Co Ltd was established and over 100 households in Tantou became shareholders.

In these months, more than a thousand tourists have been received a day and many schools have come to carry out research and learning activities in Tantou.

“Under the care from President Xi, we now have more energy and greater goals! Our lives will definitely become much better”, Sun said with hope.