Due to the novel coronavirus epidemic, taking online classes has become a universal means for Chinese students to continue studying. But for those in remote and rural areas, poor access to the internet has become a great barrier. 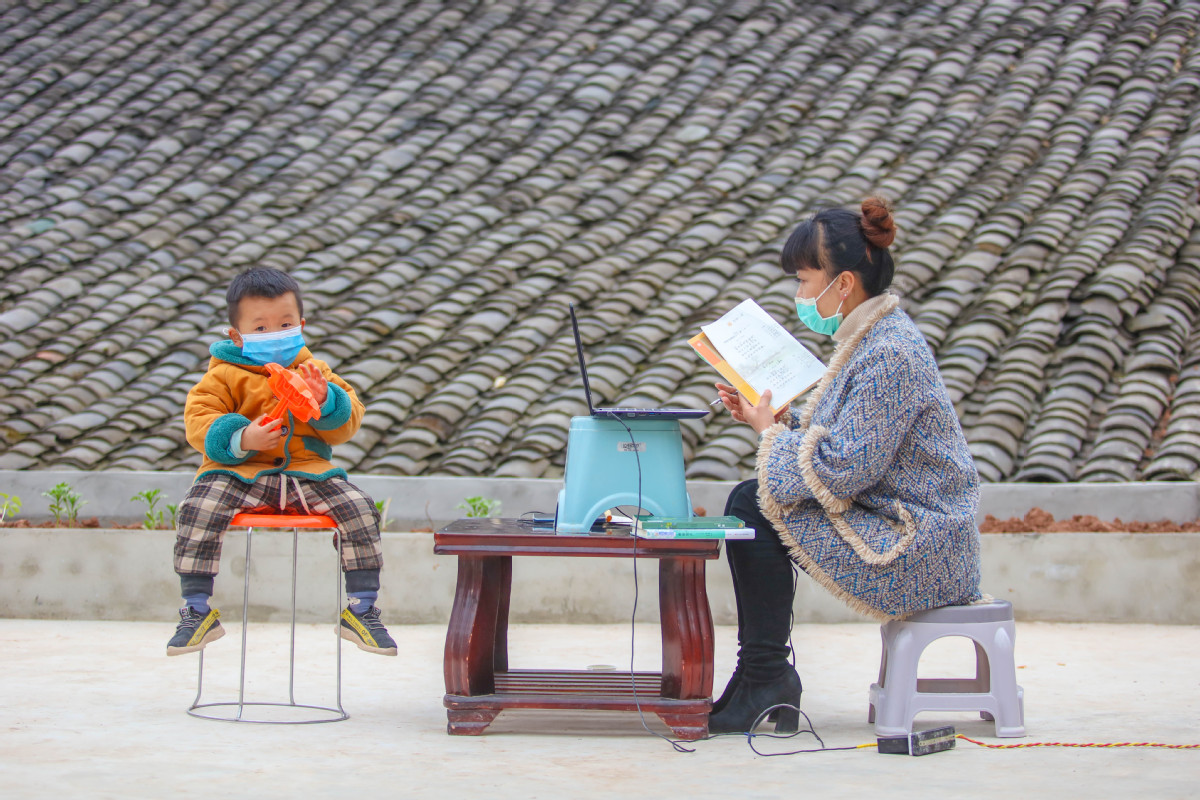 Elementary school teacher Wang Yongli answers questions about school assignments last month in Suining, Sichuan province, as her son plays nearby. She has to 'borrow' her neighbor's internet connection and work outdoors as she doesn't have one at her rural home. (Photo: China Daily)

"I wish I could surf the internet as easily as students living in cities," a high school student from Jianzhatan town, Qinghai province, using the alias Niang Ba was quoted as saying by news website qq.com.

Jianzhatan is a remote area with a sparse population sitting at a high altitude. The town has only 4,000 residents on 642 square kilometers of land. There's no broadband service or computer at Niang's home. Her family only has an old smartphone that has been used for many years.

While other students and parents choose from all kinds of online study platforms, rolled out by different companies during the epidemic, Niang is not aware of most of them.

According to her daily plan, four hours are set aside to take care of sheep and cattle and 90 minutes for housework.

"I read my books and do my homework from school while they graze the meadowland," she said, adding that she needs to catch up with them when they stray too far.

The time she goes online is when she uses her father's phone to watch a live English class at night.

"But the connection here is not stable," she said.

Despite this, her father spends 49 yuan ($7) a month for a no-limit data package for internet access.

"I want to go to college in the future, so I can't waste even one minute," Niang said. "But I would come back after graduation to become a teacher here because people from outside are not willing to come."

She is not alone. Many cases of students in remote areas trying everything possible to get an internet connection for online classes have been mentioned on social media.

A 21-year-old girl in the Tibet autonomous region walked two hours each day to climb a mountain where she could get a network signal and take online classes taught by her school in Hunan province, Xinhua Daily Telegraph reported.

Guo Cuizhu, a middle school student from Liufen village, Henan province, is known as a popular "freeloader" for using the village committee's Wi-Fi.

"Her family is poor, which is why they don't buy broadband service and her father's phone doesn't have enough mobile data for her to take online classes," Zhao Yaomin, a public servant working at the village, was quoted as saying by Luoyang Evening News.

Fortunately, such difficulties are being gradually solved by governments, schools and related companies. Communication base stations have been established in many mountainous areas. Further, some poor families have been provided with free broadband services and equipment, while others have phones that have been supplied with free data packages.

For example, China Mobile is setting up more than 2,000 base stations for 4G signals in the Guangxi Zhuang autonomous region's rural and remote areas with an investment of 400 million yuan, according to China National Radio. The project was started in September and is expected to be completed by May.