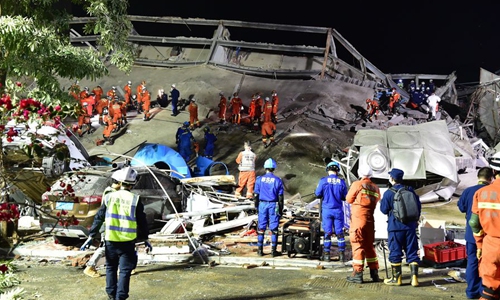 The collapse of a hotel building in Quanzhou, East China's Fujian Province, which was used as a COVID-19 quarantine center, was illegaly constructed, officials from the Ministry of Emergency Management said Tuesday.

The preliminary investigation showed the hotel had been illegally constructed and had gone through many rounds of illegal reconstruction, which exposed the relevant parties' failure to fulfill their safety production responsibilities, Shang Yong, the deputy head of the ministry, said at the press conference on Tuesday.

Their irresponsibility resulted in long-term hidden safety loopholes and blind spots. The blood lesson was shocking, Shang said, noting the ministry will carry out a comprehensive investigation and hold those responsible for the accident to account after rescue efforts end.

Rescue work is still underway. At present, every effort is being made to find and rescue the missing persons. As long as there is a glimmer of hope, they will never give up, Shang noted.

Xinjia Hotel collapsed at around 7:15 pm on Saturday, trapping 71 people in the rubble.

A pillar on the first floor of the building was deformed three or four minutes before the entire building collapsed, according to Zhang Yi, an official from the Housing and Construction Bureau of Quanzhou.

The collapsed building was being used as a medical observation site for people from regions hit hard by the COVID-19 outbreak.

It was unclear why the hotel was initially chosen as a quarantine site.