Watching cultural relics live on the Internet is popular 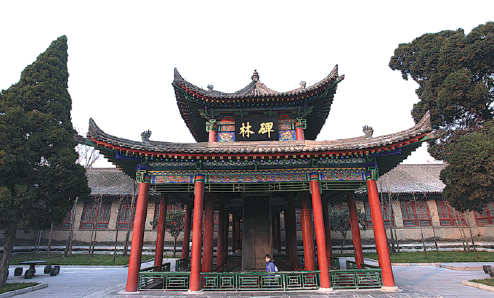 The educational winter break should have been one of the busiest seasons of the year for Bai Xuesong, a tourist guide from Xi'an Beilin Museum in the capital city of Shaanxi province.

However, the nationwide extension of the Spring Festival holiday and the safety measures being implemented following the outbreak of COVID-19 have created an extraordinary situation.

The Beilin (literally meaning "forests of steles") museum is home to over 10,000 precious stone carvings, steles, epigraphs and other calligraphy works that have been engraved on rocks throughout Chinese history, one of the largest collections of such cultural relics in China. Like many others, this institution has remained closed for over 40 days in a bid to contain the spread of the virus.

This year, however, museum administrators have given him a new stage upon which to display his talents: hosting a two-hour live "prime-time talk show" on Taobao, one of China's major e-commerce sites. The first episode streamed at 8 pm on Feb 23.

Despite being talkative, humorous, and knowledgeable when introducing the history of Chinese calligraphy to museum visitors, he was reluctant to accept the assignment.

"I don't even use Sina Weibo nor post on WeChat," he tells China Daily in an interview via telephone," let alone participating in any live broadcast.

"But this time I thought why not have a go, even if it's only once?" Bai explains.

Holding an iPad to kick off his "tour on cloud" for Taobao's users, Bai found that his concerns were unwarranted when his debut was warmly welcomed.

"Why was calligrapher Liu Gongquan (778-865) the one person in China who feared the death of others the most?" he posited before answering his question during the livestream. "Well, because every time a noble or a high official died, he was invited to write an epitaph."

Following his informative introduction of key collections in the museum, plus vividly told stories and jokes surrounding the calligraphy masterpieces, the comment section of his show was inundated with questions, encouragement and "thumbs-up".

Unexpectedly, about 400,000 people tuned in that night, many of whom offered messages of support and promises that they would visit the museum after the epidemic.

"I could never have imagined so many people would be interested in this topic, particularly when their overwhelming concern is for the epidemic," Bai says.

Despite being a biology major in college, Bai chose to follow his personal interest when looking for a career. He spent two years in Xi'an after graduation attempting to write online historical novels, but his work didn't sell well.

"I prefer not to mention their titles," he laughs. "That's why I wanted to find another way of using my interest in history and literature to benefit people."

Online fame has finally found him, albeit almost a decade later.

"I don't expect to become an online celebrity," he says. "Nothing is better than turning your interest into a job and sticking to it for a long time."

His role as an online livestream host seems to have taken strides beyond a "one-time only" trial. Since that first episode, he has hosted three more Taobao talk shows introducing stone cultural relics at the museum.

"Maybe I'd better prepare an outline for follow-up lectures," Bai says. "I'm not sure whether I can continuously find enough to talk about."

The epidemic has led to the shutting of museums nationwide, but people still want to know about culture. Xi'an Beilin Museum is one of eight museums in China that took to Taobao to offer livestreaming tours on Feb 23.

For example, Suzhou Museum in Jiangsu province, chose to start its broadcast at noon to make full use of the sunlight to show off its architecture, designed by the late I.M.Pei.

That was followed by Liangzhu Museum in Hangzhou, Zhejiang province, at 7 pm, which saw two narrators walk through galleries introducing highlighted cultural relics.

The Archaeological Ruins of Liangzhu, which date back to 5,300 years ago and was home to an ancient jade-worshipping civilization, is also a World Heritage site.

About 40 Chinese museums have opened shops on Taobao, selling souvenirs and other products, and for some it is their first foray into the digital realm.

Zhang Yun, deputy director of Xi'an Beilin Museum, admits that, compared with national-level museums, smaller institutions like hers rarely have enough resources to diligently operate digital platforms. After all, receiving over 700,000 visits a year is already a challenge.

When Taobao first contacted the museum about the possibility of operating a streaming activity during the closure, Zhang was reluctant.

"Frankly speaking, we worried whether it would go to the wrong direction of becoming overwhelmingly commercial," she says. "However, it also seemed to be a new opportunity to promote cultural relics as well. As such, we established a bottom line: the broadcast is mainly to focus on introducing our key collections rather than selling souvenirs."

The unexpected success of the broadcasts has helped to change her outlook.

"This new format can break down geographical barriers," she says. "We realize that such digital channels will get more people to appreciate traditional culture."

While adhering to his main mission, Bai still occasionally promoted several of the museum's souvenirs during his online lecture on Feb 23. His sales that night reached 20,000 yuan ($2,860).Though the number might seem trivial compared to some celebrated webcast anchors who can reach that amount in seconds during just one promotion on Taobao, it is a big step forward for a museum.

"I only found out that our museum had a Taobao store after I got the assignment," Bai recalls. "I became only the 400th subscriber to it."

However, that has changed significantly over the last couple of weeks, with the store welcoming over 20,000 subscribers.

"Livestreaming offers a great interactive experience for online users to gain knowledge," says Dai Yan, a manager in charge of the project on Taobao. "Users can instantly give feedback to the anchors and ask questions about the museums."

Though the COVID-19 outbreak has brought a lot of inconvenience, museum operators now see this trial as a chance for further reform.

"Old thinking still prevails in museum operation," Zhang says. "That's partially because a bonus system to sustainably encourage creative talents is often lacking in nonprofit public institutions like ours. The other reason is that the academic background of museum employees is often far away from technology."

However, she believes that the burgeoning digital platforms of museums, and features such as livestreaming, will continuously urge the creation of more dynamic systems and the recruiting of talent with more diverse backgrounds.

According to Luo Xiaoqun, a director in charge of public education at Liangzhu Museum, over 190,000 people watched their livestreaming tour on Feb 23. It was originally planned to last for one hour, but due to the response and warm feedback from viewers, the duration of the broadcast almost doubled.

Encouraged by its popularity, a second live broadcast was arranged for March 1.

"It reminds us to widen our horizons," she says. "Short videos, livestreaming and other new approaches can bring the cultural relics closer to people's daily lives."

These improvised online measures will have their legacies, even after the epidemic passes. Luo says the museum will offer a regular, weekly livestreaming show on Taobao.

And, after the long closure, there is finally a light at the end of the tunnel for institutions desperate to reopen physically. On Feb 27, the National Cultural Heritage Administration gave the green light to the opening of the country's museums in a step-by-step manner, in accordance with the epidemic control measures.

Both Zhang and Luo say that their respective museums have drafted specific plans for reopening to ensure the safety of visitors, and Bai is eager to return to his previous position.

"No matter how attractive livestreaming shows can be," Bai says, "it cannot replace the experience of visiting the site and seeing the relics for real."