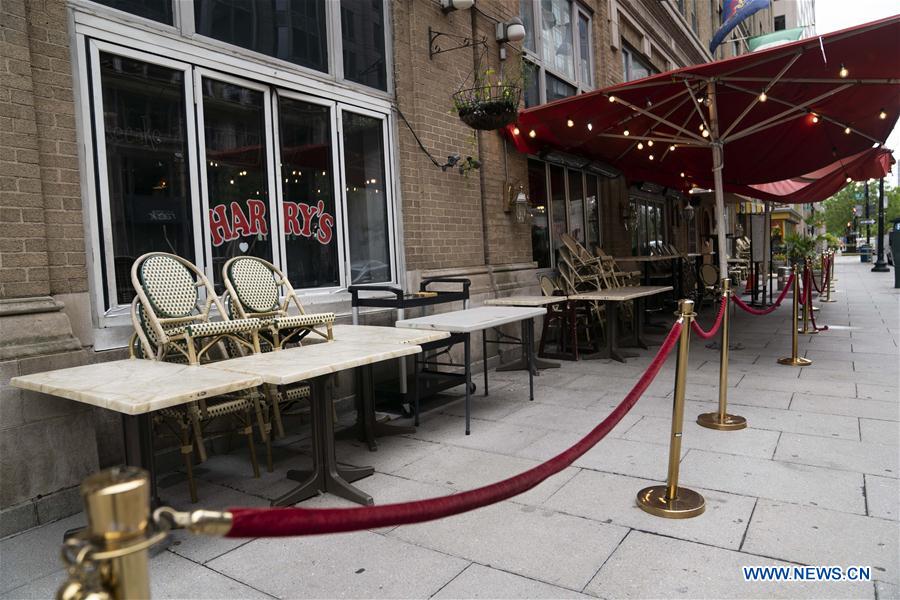 Chairs and tables are seen outside a closed restaurant in Washington D.C., the United States, on April 24, 2020. (Photo: Xinhua)

U.S. President Donald Trump on Friday signed into law a 484-billion-dollar relief package to boost funding for small businesses, hospitals and virus testing, as the country grapples with COVID-19 public health crisis and its economic fallout.

The bill will be "great for small businesses, great for the workers," Trump told reporters at the signing ceremony in the Oval Office of the White House, joined by Treasury Secretary Steven Mnuchin and Republican lawmakers.

The PPP, designed to provide loans for small businesses to keep their workers on the payroll during the COVID-19 outbreak, ran out of money last week. In a previously approved 2.2-trillion-dollar relief package, 349 billion dollars had been allocated to fund the PPP.

About 80 percent of PPP applicants said they are still waiting, and many do not know where they are in the application process, according to a survey released earlier this week by the National Federation of Independent Business.

U.S. Vice President Mike Pence, who chairs the White House Coronavirus Task Force, said Thursday at a White House briefing that 4.93 million tests having been performed across the country so far.

According to a data-tracking tool developed by the Center for Systems Science and Engineering at Johns Hopkins University, over 880,000 cases have been confirmed across the country as of Friday afternoon, with over 50,000 deaths reported.

Anthony Fauci, the administration's top infectious diseases expert, said in a recent interview with Time magazine that the United States needs to "significantly ramp up" its testing capacity in order to effectively contain the spread of the virus.

The signing ceremony came one day after the House of Representatives approved the bill by a vote of 388-5. On Tuesday, the Senate swiftly cleared the legislation in a voice vote.

Calling the new bill "an interim emergency funding package," Democratic leaders have said they are disappointed that the administration has not agreed to more funding for state, tribal and local governments on the front lines of this crisis, pledging to advance a larger bill in the near future.