CHINA Chinese airlines keep flying to US with medical supplies

Chinese airlines keep flying to US with medical supplies 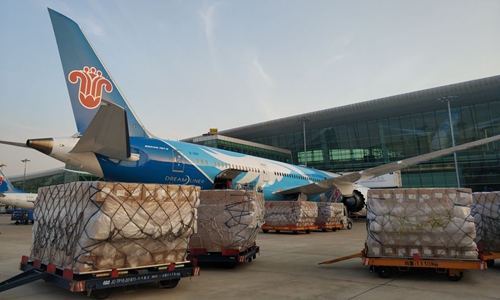 Tonnes of medical supplies are to be loaded onto a China Southern Airlines flight for New York at an airport in Wuhan, central China's Hubei Province, on April 24, 2020. (Photo: Xinhua)

While the US government has tried to stigmatize China and made unreasonable accusations against the country for numerous times, Beijing is taking practical steps to help the US fight the coronavirus pandemic, experts said.

Data from Flightradar24, a flight tracking service provider, showed that several planes from Air China were flying to New York on Saturday, the latest example of medical materials being rushed from China to the US.

The passenger terminal for Air China was Los Angeles as of Sunday, due to the strict overseas flight policies of the Chinese government, so it is certain that the flights to New York were carrying goods, an anonymous insider told the Global Times on Sunday, adding that those flights on Saturday could carry more than 200 tons of medical supplies to New York.

Air China is not alone.

Data from aviation information provider VariFlight showed that from April 18 to 25, there were 75 planes including all-cargo flights flying from cities such as Shanghai, Beijing, and Shenzhen to cities in the US, including New York and Los Angeles. The carriers included China Eastern Airlines and China Southern Airlines.

The US began to import medical supplies from China at the end of March. The New York Times reported on March 29 that a commercial aircraft carrying 80 tons of gloves, masks, gowns, and other medical supplies from Shanghai to New York was the first of 22 scheduled flights that the White House officials say will funnel much-needed goods to the US by early April.

New York, the epicenter of the outbreak in the US, has reported rising hospitalization and death rates. The state has reported more than 150,000 confirmed cases, and the death toll is nearing 12,000.

New York Governor Andrew Cuomo said the city has struggled to find international supplies for test kits since US President Donald Trump has left it up to individual states to procure their own tests and other supplies - most of which are flown from China, according to CNBC on Tuesday.

As of April 20, China had provided the US with more than 2.46 billion masks, meaning seven masks for each person in the US, plus nearly 5,000 ventilators and many other needed items, said Hua Chunying, spokesperson of the Ministry of Foreign Affairs in China, on her Twitter account.