WORLD No US state meets China's work resumption criteria, as does EU

No US state meets China's work resumption criteria, as does EU 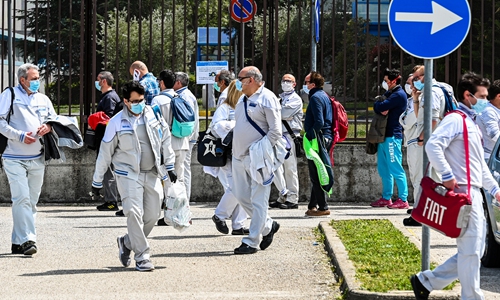 What can China offer to the world as more countries plan to ease restrictions and lift city lockdowns? Collective will of sticking to prevention and control measures in fending off risks of a resurgence of infections, close monitoring and tracking of suspected patients and close contacts with the help of high tech and massive testing are major experiences that China - the first country to suffer a severe impact from the outbreak of the COVID-19 and the first to emerge from the crisis - applied to strike a balance between saving their economy and not triggering a second outbreak. However, some observers don't believe the West could do the same.

As some residents in Georgia, US thought about rushing into hair salons, and restaurant owners in Tennessee prepared to resume their businesses at half capacity, European countries like Italy have outlined plans to lift some of the longest lockdowns put in place due to the unprecedented coronavirus pandemic.

While more countries have prepared to ease restrictions and lift lockdowns, which are seen as effective measures to reduce infections until a vaccine is available, whether they are ready to return to normalcy without risking a deadly resurgence remains an open question.

UK Prime Minister Boris Johnson appeared in public for the first time on Monday since he contracted the virus, but faces a significant dilemma: How to lift the lockdown that is destroying the British economy without triggering a deadly second wave of the outbreak, media reported.

The move followed Italian Prime Minister Guiseppe Conte's  announcement on Sunday of plans to ease the lockdown in Europe's hardest-hit country for May 4, allow for some activities, and keep schools suspended until September.

More European countries have planned to ease lockdown measures in the coming weeks. For instance, the French government is working on a detailed plan to lift restrictions on some sectors starting May 11, and Spain is expected to allow outdoor exercising from May 2, media reports said.

Italy, the epicenter of the COVID-19 outbreak in Europe, underwent a strict city lockdown with emergency measures deployed across the country. It took 56 days for Italy to lift the lockdown. That's 20 days shorter than the 76-day lockdown in Wuhan, the first city to take all-out restriction measures against the deadly virus  in China.

While the escalating pandemic forced some US states like New York and California to take proactive social distancing measures in mid-March, some states like Georgia and Tennessee plan to reopen parks and small businesses, after protesters defying stay-at-home orders took to the streets as they consider stringent measures unnecessary and harmful to the local economy. As a result, some US states put in place much shorter lockdown periods compared to measures implemented by China, which has been cautiously and progressively pushing forward a reopening of its economy.

While it took about two months for China to lift the lockdowns and a longer time to standardize prevention and control work, more epidemiology and global affairs experts raised the same question: Is it appropriate for the West to relax restrictions, and are they ready for the risks as global cases have surpassed 3 million infection as of Monday?

If Western countries follow the same strict standards as China did, they are still far from lifting lockdowns and easing restrictions, Zeng Guang, chief epidemiologist with the Chinese Center for Disease Control and Prevention, told the Global Times on Monday.

After the lockdown of Wuhan, the epidemic situation outside Central China's Hubei Province stabilized weeks later in February. The Chinese central government extended the usually seven-day long Spring Festival holidays, maintained strict social distancing measures, and waited until February 21 to hold a key meeting to push forward the resumption of work, as the country had flattened the curve of confirmed cases with about 300 new infections added daily following a series of prevention measures.

From the middle to the end of February, the average work resumption rate was about 40 percent, showing that a large percentage of factories and business remained closed despite the fact that the top authorities issued guidelines on reopening.

According to the national holiday schedules, businesses and factories should have reopened on January 31, but overall economic activities were delayed for more than half a month due to the epidemic.

Throughout March, as China saw almost double-digit growth in confirmed cases every day, provinces and regions came up with plans for returning to normal on a case-by-case basis. By March 17 - 54 days after the Chinese central government imposed the Wuhan lockdown - the work resumption rates in many regions excluding Hubei had exceeded 90 percent, and in manufacturing hubs in southern China, the rates were close to 100 percent.

"The US and most European countries are not even close to being in a situation to safely lift the lockdown," John Ross, a senior fellow at the Chongyang Institute for Financial Studies at the Renmin University of China, told the Global Times on Monday.

For example, in the last seven days, the number of average deaths per day in China is zero, and in South Korea was 1. Still, both countries are very cautious  in lifting their restrictions and testing, Ross noted.

China also planned a phased comeback. The first batch of companies to resume work by the end of January and early February were mainly state-owned enterprises, which play a crucial role in ensuring the supply of medical products. Some reopened projects were also essential to social warfare and livelihoods. The second phase saw enterprises above a specific scale resume production. Enterprises involved in steel, grain, coal, and rail services reached a resumption rate of above 70 percent, as the official data showed. And they all had first to fulfill the requirement to meet standards for epidemic prevention and control work.

The US government has also issued "open American guidelines," a three-phased approach based on the advice of public health experts. These steps will help state and local officials when reopening their economies, getting people back to work, and continuing to protect American lives, according to the website of the White House.

"There are three criteria for reopening. First, local hospitals must see consecutive declines in flu-patients or flu-like patients for more than 10 days; second, there must be large-scale nucleic acid testings in certain areas where positive rates have dropped for 14 consecutive days; and  third, you have to make sure the healthcare system won't be overwhelmed when there is a resurgence," Chen Xi, an assistant professor of public health at Yale University, told the Global Times on Monday.

"No single state in the US can meet these criteria yet. A mathematical model suggested that the earliest possible reopening in the US will be after May 20, when some states might be able to meet those requirements," he said.

As the World Health Organization and global medical community hailed China's "impressive" fight against the virus and quick containment, setting an encouraging example for other countries and regions at a high social and economic cost, countries planning a comeback could learn from China's experience in striking a balance between health and economic protection, some experts said.

"China's lifting the lockdown has come with contact tracing applications and the use of artificial intelligence, mandatory temperature testing to enter public facilities such as cafes and restaurants, registration of contact details, and mass coronavirus testing," which included up to 60,000 tests a day in Wuhan, Tom Fowdy, a British political and international relations analyst, told the Global Times on Monday.

"I do not believe the US is ready at all to lift the lockdown, as it is obvious these considerations are motivated by economics and not progress in fighting against the virus," he said.

For China, ending the lockdown was not the end of the anti-epidemic war. More places, businesses, and people are now making preventive measures part of their daily routine. They reflect a collective will the Chinese central government has been calling for to enhance the prevention and control work to fend off risks of a second wave or resurgences of cases. People are also taking unified and robust actions in the face of the common threat.

"To prevent a resurgence, countries must be organized, phase the lifting of regulations carefully and apply some contingencies aimed at making the response faster and better prepared for any new outbreaks," Fowdy said.

However, some Chinese experts do not believe that the West will use China as a reference when it comes to planning a comeback, especially as some have adopted "herd immunity." That allows for a high proportion of the population to become infected — as a passive response to the disease.

Sweden's ambassador to the US believes the country's controversial strategy of imposing only limited restrictions and not locking down the country is showing success, US media outlet National Public Radio (NPR) reported on Monday, with the country's capital Stockholm on course to reach herd immunity in the next few weeks.

Karin Ulrika Olofsdotter, the Swedish ambassador, told NPR that "about 30 percent of people in Stockholm have reached a level of immunity.

"In the absence of a vaccine, no herd immunity case has succeeded. Such a passive approach will lead to severe consequences," Zeng told the Global Times on Monday, harshly slamming Sweden's strategy in dealing with COVID-19.

One precondition for herd immunity is ensuring the protection of vulnerable groups. The data from Sweden showed that the number of deaths among the elderly at nursing homes accounted for more than half of the total deaths, which cannot be seen as a successful result, said Chen from Yale University.

"The terrible infection and death rates in the US and Western Europe shows that half-and-half measures, instead of the decisive ones [taken] by China, will not work," he said.