WORLD Not time to ease up, Johnson says

Not time to ease up, Johnson says 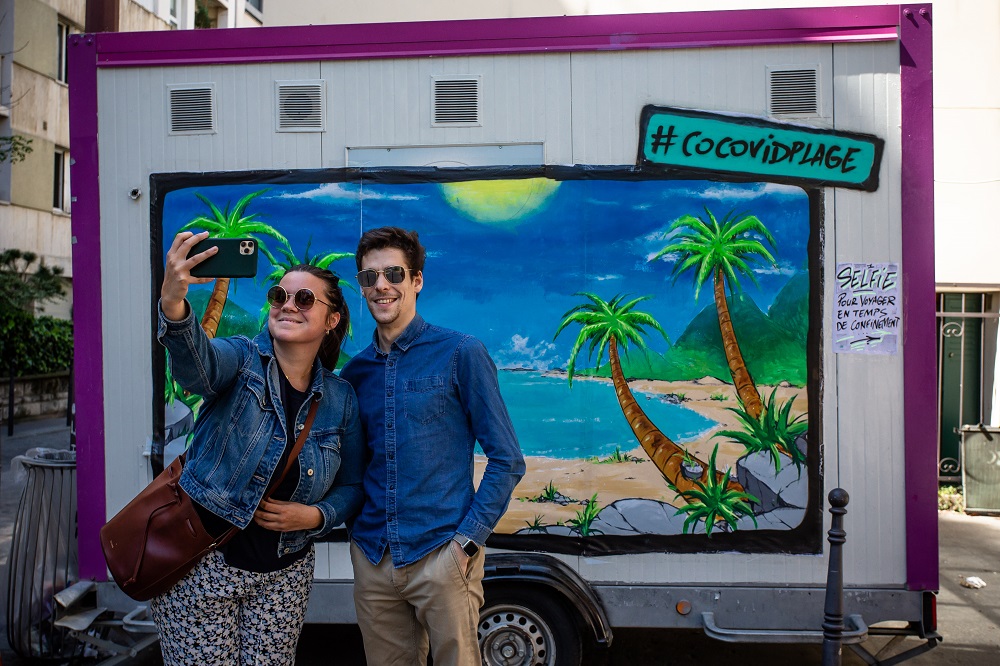 People take a selfie in front of a van painted with a seaside scene in Paris on Monday. The lockdown in France has been extended to May 11 to fight the COVID-19 pandemic. (Photo: Xinhua)

Back at work, British PM stresses risks, while other Europeans see loosening

British Prime Minister Boris Johnson, back at work after recovering from COVID-19, said on Monday it was still too dangerous to relax a stringent lockdown hammering the economy as that may cause a deadly second outbreak.

Speaking outside his Downing Street residence a month and a day since testing positive for the virus, Johnson compared the disease to a street criminal that the British people had wrestled to the floor.

Stressing it was still a time of maximum risk, he said he understood the concerns of business and would consult with opposition parties－but he made clear that there was to be no swift lifting of the lockdown.

"We simply cannot spell out now how fast or slow or even when those changes will be made, though clearly the government will be saying much more about this in the coming days," he said.

The United Kingdom had reported 152,840 cases and 20,732 deaths in hospitals as of Sunday, according to health authorities.

Foreign Secretary Dominic Raab said the nation's exit strategy from the coronavirus lockdown will be like a "new normal".

Speaking on Sky New's Sophy Ridge on Sunday program, Raab rejected fresh calls from senior Conservatives for restrictions to be eased and said the outbreak was "at a delicate and dangerous stage".

"We need to make sure that the next steps are sure-footed, which is why we are proceeding very cautiously and we are sticking to the scientific advice with the social-distancing measures at this time, whilst doing all the homework to make sure that we are prepared in due course for the next phase," he said.

"We've set out the five tests for what the next 'transitional phase' would look like. It won't be just going back, it would be a new normal if you like－with social distancing measures adapted to areas which are currently closed off."

In Europe, 1,223,581 people had contracted the virus and 121,476 of them had died as of Monday, according to the European Centre for Disease Prevention and Control.

In Italy, the pandemic had claimed 26,644 lives and infected 197,675 by Sunday, according to the country's Civil Protection Department. But the number of new cases has been slowing and the number of patients in intensive care has been falling steadily.

Italy will allow factories and building sites to reopen from May 4 and permit limited family visits as it prepares a staged end to Europe's longest coronavirus lockdown, Prime Minister Giuseppe Conte said on Sunday.

Following weeks of lockdown, Italy is looking ahead to a second phase in which it will attempt to restart the economy without triggering a new wave of infections.

"We expect a very complex challenge," Conte said as he outlined the road map to restarting activities put into hibernation since early March. "We will live with the virus and we will have to adopt every precaution possible."

In France, the government aims to ease some of the lockdown measures on May 11 by initially reopening schools, although it has yet to finalize how this might work in practice. The lockdown has been in place since mid-March.

In Spain, children under 14 were allowed to go outside on Sunday for the first time since the country entered a state of alarm and a virtual lockdown on March 15.