CHINA Volunteers proud to help on the front line

Volunteers proud to help on the front line

Younger generation willingly steps up and fulfills their duties

The Wuhan Institute of Shipbuilding Technology in Hubei province was used as a quarantine site from Feb 8 to March 28, hosting 1,962 people in total. Cheng Shixiong, 21, a volunteer, didn't take a single day off when helping to run the site.

On the morning of March 28, the last batch of recovered COVID-19 patients completed their quarantine and left. "When I saw their smiles, I felt like all our efforts were worthwhile," Cheng says. 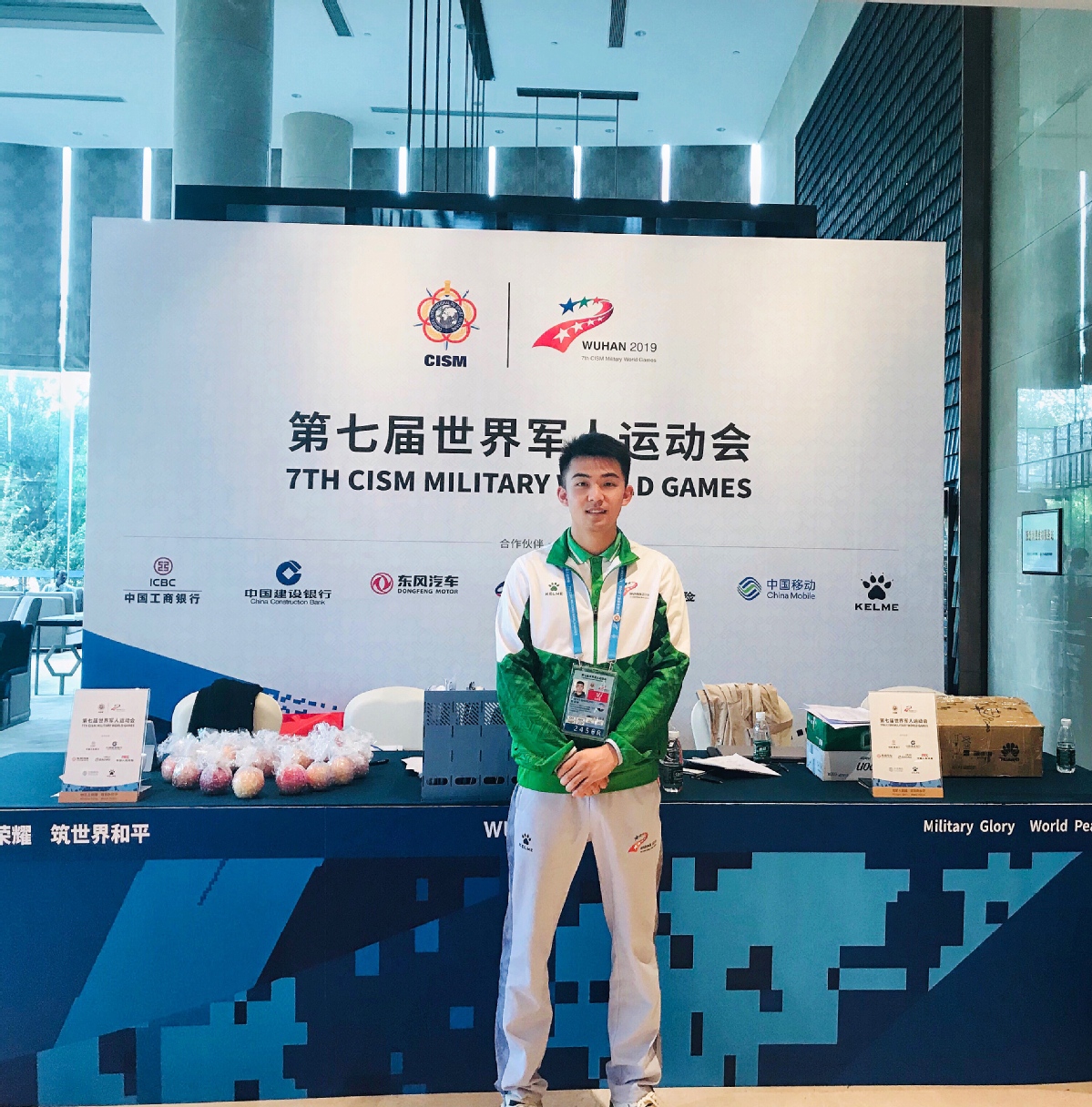 President Xi Jinping wrote a reply letter to 34 Party members from Peking University's medical team born in the 1990s who were sent to Hubei province, the former epicenter of the viral outbreak in China, on March 15.

He praised the 1990s generation for their dedication in the fight against the COVID-19, saying that they demonstrated by their actions that the Chinese youth of the new era can be entrusted with great missions.

Cheng said he was touched and encouraged by the letter. "People often have a stereotype about our generation, and the letter is a rectification for us," he says.

The youth volunteers are shouldering social responsibilities and making contributions to the country on their own－not only fighting on the front line of pandemic control, but also helping in every field such as environmental protection and rural education.

Cheng, a junior at the School of Physical Education, Central China Normal University in Wuhan, was responsible for collecting and distributing supplies for quarantined people and medical staff.

As the youngest volunteer at this site, and also a sports training major student, Cheng took on physical work as well as paperwork. He also chose to live at the quarantine site so that he could show up whenever he was needed.

Once a new batch of COVID-19 suspected patients came, Cheng and four other volunteers had to coordinate beds and bedding and prepare dozens of items for daily use including toothpaste, toothbrushes and soap.

One day a 15 metric-ton supply of mineral water arrived. Cheng and two other volunteers needed to move all the bottles from the truck to storage. When they were becoming exhausted, more than 50 firemen showed up to help.

"We took more than 3 hours to move all 1,462 boxes of mineral water. Without the firemen's help, we couldn't have finished it," Cheng says. "A single person's strength is limited, but we know the whole country is helping us."

Cheng's mother, who was diagnosed with bladder cancer last year, didn't agree with Cheng's decision on volunteering, as there was a risk that he might be infected. Gradually Cheng persuaded his mother.

"The pandemic also reminds me how precious health and family ties are," he says.

He didn't leave until April 8, when the site was officially returned to the institute.

"We had to clean and disinfect the whole campus to make sure it's the same as before it was used as a quarantine site," Cheng says.

Cheng was a volunteer for the Military World Games held in Wuhan last October. He still remembers witnessing Wuhan getting better and better to prepare for the event and it was the first time he saw his hometown under the world's spotlight.

"I've experienced the highlight of Wuhan, and now when my hometown touched a low point, I want to get through the difficulty together with the city," Cheng says.

Like Cheng, 28-year-old Wuhan local Zhu Aobing also volunteered to help his home city. He signed up right away when he heard about the recruiting of volunteers for the vaccine.

A total of 108 Wuhan locals became the first batch of COVID-19 vaccine volunteers in March. They are healthy adults aged from 18 to 60 selected from thousands of people who applied. Zhu was one of them.

"Since the lockdown, I've always been thinking about what I can do for my hometown during the pandemic, and I won't miss this volunteer opportunity," he says.

He told his family about this after he injected the vaccine. Luckily his family all supported him.

Zhu is a freshman at the College of Engineering Technology of Hubei University of Technology in Wuhan.

He joined the army when he was 18 years old and served for five years. Both his father and grandfather were soldiers, so he became one. However, Zhu didn't want to miss the chance to study further, so he decided to go to college last year.

"No matter how long I have finished my military service, I always have the responsibility to go to the front line when the country needs me, and when facing this pandemic, being a vaccine volunteer is what I should do," he says.

His vlog each day on Sina Weibo during his 14-day quarantine attracted tens of thousands of followers who were concerned about his health.

"Maybe because I do exercise regularly, I don't have any bad effects since I took the vaccine," Zhu says."I post a vlog each day because the news about the vaccine can bring people hope and positive energy."

The vaccine was created by an Academy of Military Medical Sciences team led by bioengineer Major General Chen Wei and was approved for clinical trial on March 16.Zhu met Chen when he was doing physical examination for the vaccine candidate selection and saluted her.

Some netizens commented on his Weibo account that he's a hero. He doesn't agree. "The real heroes are the scientists who develop the vaccine against COVID such as Chen Wei's team," he says.

Besides reporting his health condition, Zhu also uses his one-minute vlog to introduce Wuhan to his audience including its traditional snacks.

"I like to take photos, but it's my first time to shoot and edit videos for vlogs," Zhu says.

During his quarantine, besides learning his college course online and making vlogs, he also collaborated with other vaccine volunteers to discuss how they could continue to help their hometown when the quarantine was over.

Zhu and five other volunteers visited Yichang to promote their oranges which are unsalable due to the pandemic.

"I'll continue to make the vlogs, letting more people know about Wuhan and also continue to do more volunteer work," he says.

Fu Hsin-ying, 24, interned at Greenpeace, a non-governmental environmental organization from 2017 to 2018.

During her internship, she helped to found a nature reserve area in Yunnan province as well as pushing a canned tuna company to make a promise to help toward sustainable development.

What touches her most is a plastic-reduction campaign she took part in. She noticed the damage of plastic garbage and her action on using fewer plastic products continues till today.

"The internship lets me know that the voice of action may not be the loudest, but is the most powerful one," she says.

Being an early education teacher for around two years, Fu found her lifelong career goal－to initiate a public welfare program on early childhood education in rural areas in China.

She has done research and read other research that says the intelligence development of children aged up to 3 in rural areas is slower than in cities.

She hopes to help these kids in rural areas with her knowledge and caring. Fu is applying for graduate study on education.

The concept of environment protection is also part of her education."I just set myself as an example, tell the children to explore the environment and nature, and have a sense of belonging so that they will cherish and protect the environment," she says.

For Zhao Yue, 23, a volunteer teacher in a senior high school in Nanjian Yi autonomous county in Yunnan province, the priority is to make sure her students digest the physics courses she teaches. 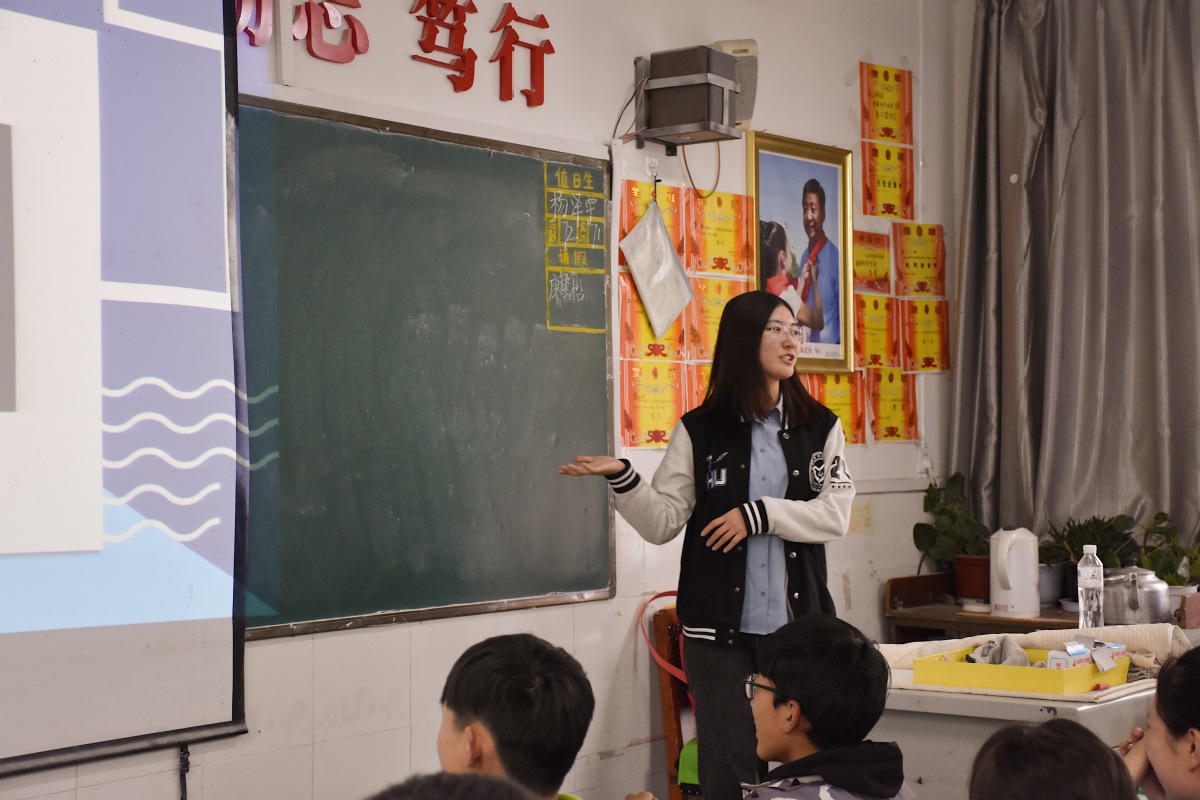 Zhao Yue shares her story with students as a volunteer teacher in the Tibet autonomous region. (Photo: China Daily)

Zhao is taking a gap year to be a member of the 21st group of volunteer teachers made up by Tsinghua graduates.

The Postgraduates Voluntary Teaching Corps of Tsinghua University was founded in 1998. More than 300 graduates who would later go on to postgraduate programs have served as volunteer teachers with more than 750,000 accumulated hours' service during the past two decades.

Zhao was selected into the group last year with 21 candidates. They took a year of teacher training and practicing before going to the Tibet autonomous region, Yunnan, Qinghai, Shaanxi and Hunan provinces.

During the pandemic, Zhao had to give courses online. Some of her students would miss the course because of a bad internet connection or someone had to take care of a younger brother and sister.

Before the school resumed on April 21, Zhao visited some of her students' homes to better learn about their conditions.

"Most of the students live up in the mountains, only a few of them will get an offer to go to college, but I want to encourage them with my own experience, asking them to hang on," Zhao says.

Her volunteer teaching experience started when she was a freshman student and she led her classmates to help at elementary schools for children of migrant workers in Beijing.

She also took her summer vacation to take care of AIDS orphans as well as protecting the Yangtze finless porpoise.

Zhao is going back to Tsinghua University this September for graduate study, but her volunteering will not stop.

"For us who are born after the 1990s, there are countless chances and possibilities, and it's easy to lose focus," Zhao says."For those who find their purpose and pursue it, they will make it work."

She says she would always practice as her favorite quote from Chinese writer Lu Xun that says: "Give as much light as a slice of heat can produce, like however little light a firefly can make in the dark, do not wait for the torchlight."