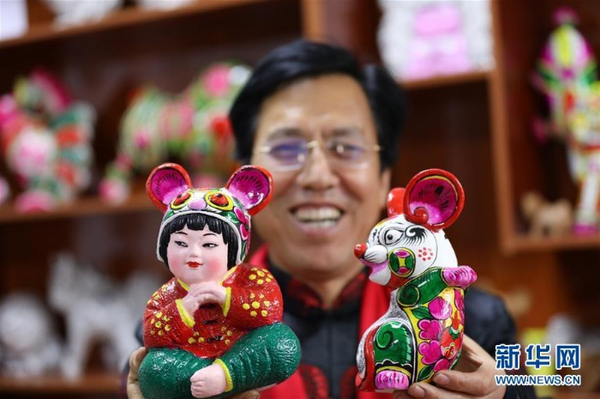 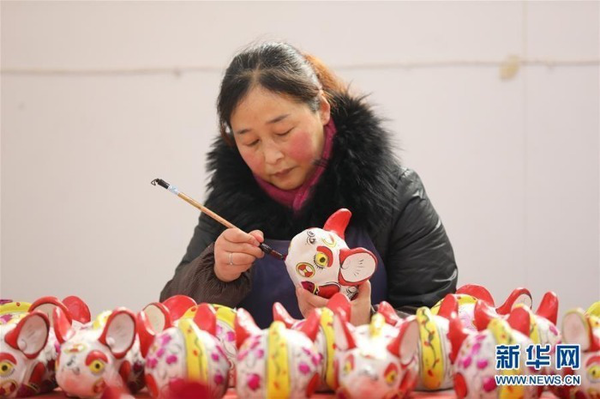 A folk artist makes clay rat sculptures at Liuying Village of Fengxiang county, Northwest China's Shaanxi province, to greet the upcoming Chinese lunar new year, the Year of the Rat. Fengxiang is reputed as the hometown of clay figurines. [Photo/Xinhua]

The craft of making Fengxiang's clay figurines, which dates back more than 3,000 years, resulted from the wisdom of the local residents. Records indicate the craft originated during the Western Zhou Dynasty (1100 BC-771 BC). The craft flourished during the Ming (1368-1644) and Qing (1644-1911) dynasties.

Many residents bought clay figurines in the past, especially during festivals or holidays, as they believed the items would bring good fortune, ward off evil spirits and prevent calamities. For millennia, the figurines have brought happiness to countless Chinese families.

Multiple skills, such as paper-cutting, embroidering, carving and New Year's painting, are used to make the figurines. Local craftspeople use strong colors (such as bright red, light yellow and jade green) to create figurines, to convey people's blessings for happiness and good luck, and to embody their desire to enjoy the good life. The artworks, characterized by vivid images depicted in an exaggerated way, have attracted countless people from both home and abroad. During past millennia, craftspeople have created numerous exquisite figurines, which have had tremendous aesthetic value. Moreover, as the unique art form embodies Fengxiang's aesthetic, literary and artistic ideologies, the figurines have high historical and cultural value.

There are two ways to produce clay figurines; first, the mold-making method, during which the artist creates the figurines, such as the God of Longevity and the God of Wealth, from clay set in molds. The second technique is the hand-kneading method, during which the artist kneads clay into the shapes of different animals, such as the Chinese zodiac (the 12 animals, which represent the 12 Earthly Branches, to symbolize the years in which people are born) and scenes depicted in operas and stories.

Past generations of craftspeople did their best to pass on the craft to younger generations. However, given the rapid industrial and technological development during the past several decades, clay figurines have been produced in a greater number of molds with more complicated designs. That has adversely affected the development of the handmade items. In 2006, China added the craft of making Fengxiang's clay figurines to the list of the country's intangible cultural heritage.

Liuying, a village in Fengxiang, is the major production base of the clay figurines. Many figurines are produced in small craft workshops, and most of those businesses are owned by families. It is common to see, especially during the slack farm season, entire families creating clay figurines while they are sitting and chatting with each other. Each family member has his/her task, such as mixing the clay with water, kneading the clay into different shapes, or carving (with a bamboo stick) patterns on the figurines. Then, the figurines are painted, air-dried and baked in small earthen kilns.

In recent years, the government of Fengxiang county has adopted preferential policies, and has increased funding to promote the production of clay figurines. As a result, the popularity of the art form has increased, both at home and abroad. In addition to the domestic market, the figurines have sold well in many countries, including Australia, Singapore, Japan and the United States.

So far, Fengxiang's clay figurines have been displayed in various cultural activities held in more than 30 countries, including France, Germany and the United States. Given the items' ingenious designs and bright colors, the United Nations (UN) refers to the figurines as the "best gifts for children."

The local government has also invested capital to build a clay figurine street in Liuying. Visitors who stop into the stores can buy figurines, and they can learn how to make the items from the stores' owners and/or their employees.

Now, more than 80 families in Liuying create clay figurines. Given the families' high annual output, more than 10 million yuan (US $1.43 million), combined, Liuying is rated as the "No. 1 village (in China) that produces clay figurines." During the past few years, many craftspeople in the village have strived to improve their figurine-production skills. As a result, their artworks have sold well, both at home and abroad.

Hu Xinming, a resident of Liuying, has been making clay figurines for more than 40 years. He began studying, under his parents, who were both craftspeople, the skills needed to make the figurines at an early age. Hu is a State-level master of arts and crafts in China, and a State-level inheritor of the craft of making Fengxiang's clay figurines. During the past several decades, he has won many prizes during international and national cultural activities. He believes figurines, which convey messages of tender affection, are alive. He always takes delight in using clay to make figurines.

The images of Hu's clay figurines — Peaceful Horse, Wealthy Sheep and Happy, Long-life Pig — were chosen as the patterns of the zodiac stamp for China's Year of the Horse (2002), the Year of the Sheep (2003) and the Year of the Pig (2007). His artworks, Phoenix-tail Cock and Wangwang Dog, debuted during the Spring Festival gala, hosted by CCTV (China Central Television) in 2017 and 2018, respectively.

Jing Ping, Hu's wife, is a Shaanxi provincial master of arts and crafts. Under the couple's influence, both Hu Jinyuan, their daughter, and Hu Jinwei, their son, have become experts in the art form. Hu Jinyuan and Hu Jinwei in recent years have designed various items (including scarves, notebooks, back cushions and mobile phones' shells) with the patterns of Fengxiang's clay figurines.

The couple's home is their treasure house, and it is filled with their and their children's art. A warm atmosphere permeates the house as the couple and their children busy themselves creating crafts, and as they discuss how to create clay figurines with "vigorous vitality." The family of art during the past several decades has created numerous superb works of art.