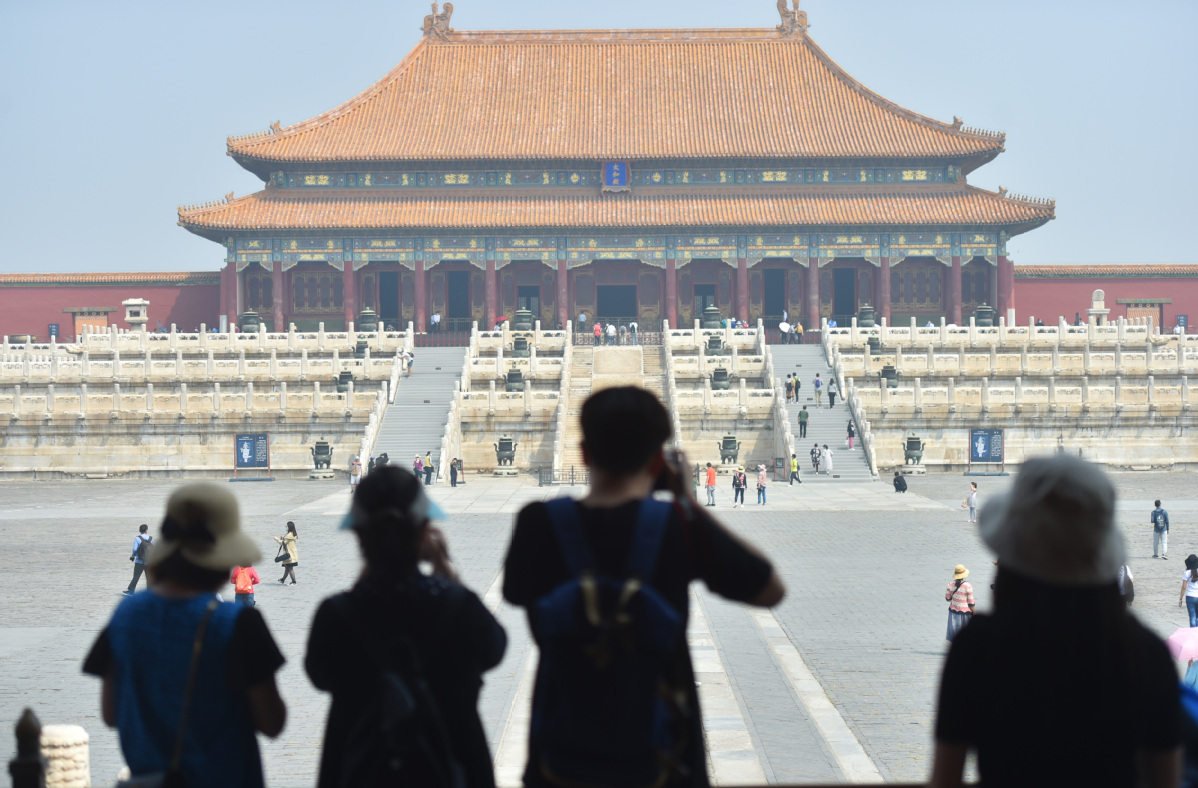 Travelers take photos at the Palace Museum in Beijing on May 1, 2020. (Photo: Xinhua)

The domestic tourism market, which sustained heavy damage from the novel coronavirus outbreak, turned in a respectable performance during the extended, five-day May Day holiday, tourism officials said.

A surge of travelers brought a welcome stream of revenue to attractions and the provinces where they are located.

Jiangxi province topped the earnings list at about 15.4 billion yuan ($2.17 billion) over the break, followed by Hunan at 14.1 billion yuan and Guangdong at 10.3 billion yuan.

Though dwarfed by the travel numbers and revenue generated during last year's four-day May Day holiday, during which 195 million trips were made, tourism operators see the recovery of tourism market as greatly significant.

Liang Jianzhang, co-founder of Trip.com Group, an online travel agency in Shanghai, said in an interview with the China Central Television that tourism operators are getting their confidence back thanks to encouraging signs from the market.

Self-driving tours are welcomed by travelers because of greater control over cleanliness, the flexibility of scheduling and privacy. Trip.com said its car reservations rose 10 percent over last year's holiday.

The average price of flights was 30 percent lower than during the holiday in 2019 and hotels have been putting on sales with average savings of 25 percent, according to Qunar, an online travel service in Beijing.

The number of travelers checking into hotels over the May Day holiday was 2.1 times higher than during the three-day Tomb Sweeping Day holiday in early April, when more restrictions were in place due to the COVID-19 outbreak.

The signs of recovery for the sector came after the strong and effective measures taken by government in curbing the epidemic as well as people's consensus in exercising self-protection when traveling, industry officials said.

The central government stressed that reservations were required before visiting to better control the flow of travelers. Domestic attractions also were directed to limit travelers' attendance to below 30 percent of their daily maximum visitor capacity during the holiday.

The instruction was strictly implemented, creating a safer travel environment. The China Tourism Academy reported that 77.4 percent of travelers visiting attractions under the reservations system rated their experience as positive.