MANILA, May 13 (Xinhua) -- The Philippines's economic growth is projected to contract by 2.0 to 3.4 percent in 2020 due to COVID-19 that continues to savage the country, the government said on Wednesday. 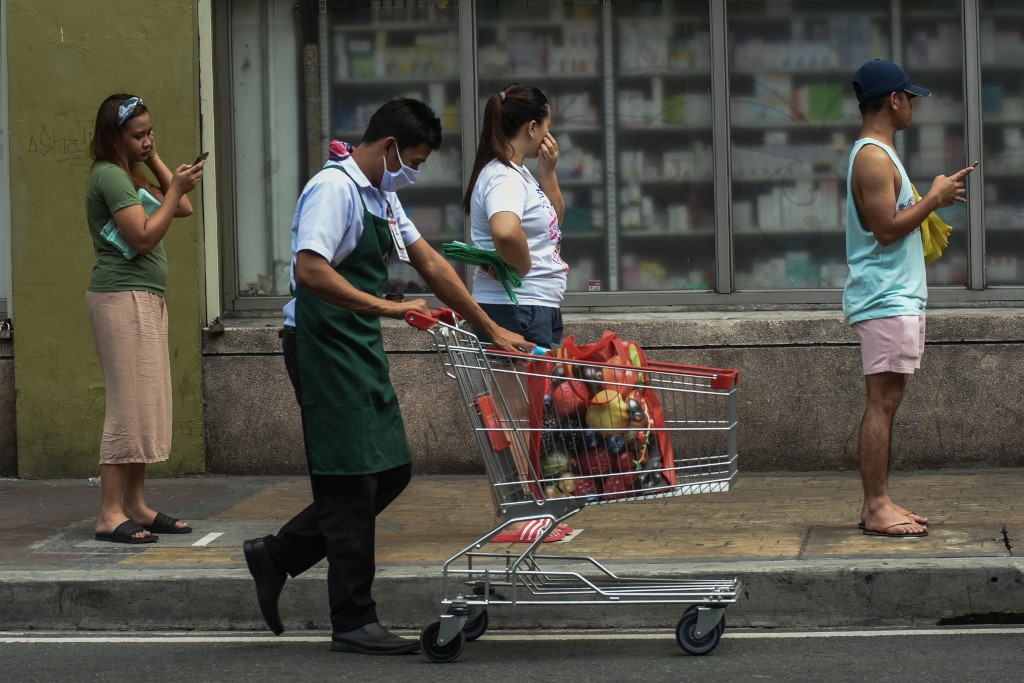 Shoppers stand apart as social distancing measures, amid concerns of the COVID-19 coronavirus, while queueing outside a supermarket in Manila on March 17, 2020. (Photo: AFP)

Responding to the impact of the COVID-19 pandemic on the Philippine economy, the Development Budget Coordination Committee (DBCC) has adjusted the country's macroeconomic indicators and fiscal program for fiscal years (FY) 2020 to 2022.

The committee said in a statement that these adjustments reflect the Philippine government's priorities of saving lives and protecting communities, while providing support to vulnerable groups and stimulating the economy to create jobs and support growth.

"These revised assumptions will also allow the government to operate with a more realistic and prudent fiscal stance as it flags the downside risks to the economy and the fiscal program for the rest of the year," the committee said.

The National Economic and Development Authority (NEDA) estimates suggest that the potential impact of the pandemic on the economy could reach 2.0 trillion pesos (roughly 39.77 billion U.S. dollars) or about 9.4 percent of the GDP this year.

The committee said timely implementation of a well-targeted recovery program, alongside efforts of the private sector, will mitigate the impact of the COVID-19 pandemic.

"Such a program will help the country regain confidence, attain higher economic growth, and restore employment rates to pre-crisis levels. The DBCC thus expects the country to recover by FY 2021 with GDP growth of 7.1 to 8.1 percent," the committee added.

Disbursements for this year, meanwhile, are estimated at 4.18 trillion pesos (roughly 83 billion U.S. dollars), which is equivalent to 21.7 percent of the GDP.

With the revised revenue and disbursement program, the committee said the deficit for FY 2020 is projected to reach 1.56 trillion pesos (roughly 3.1 billion U.S. dollars) or 8.1 percent of the GDP.

"This is 2.8 percentage points higher than the estimate of 5.3 percent of the GDP announced last March," the committee said.

The DBCC maintains that the debt level remains manageable, especially as the Philippines enjoyed its lowest-recorded debt-to-GDP ratio of 39.6 percent last year.

Despite increased deficit spacing, the DBCC said the national government's deficit-to-GDP ratio will remain in the median of comparable countries in ASEAN and in East Asia, among peers with similar credit ratings, and among other emerging market economies, as long as the ratio does not exceed 9.0 percent.

Below this threshold, the DBCC said the debt-to-GDP ratio will be around 50 percent, which is far lower than the most recent peak of 71.6 percent in 2004.