OPINIONS Beyond the short-term perspective

Beyond the short-term perspective 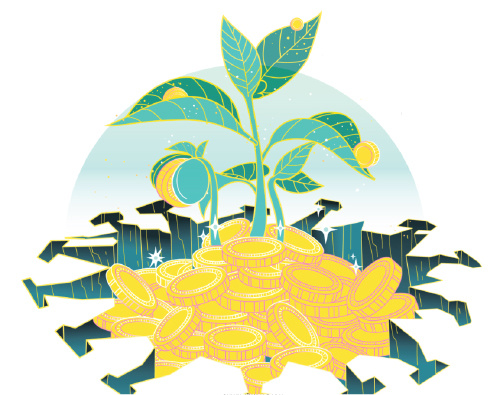 The novel coronavirus outbreak is a black swan event that is having an unprecedented impact on the global economy. According to the International Monetary Fund, the pandemic-induced global economic recession is the most severe since the Great Depression and the global economy is projected to shrink by 3 percent in 2020. The forecasts of many research institutions are also pessimistic.

To boost their domestic economy, many countries have introduced large-scale fiscal support plans. The United States is pumping in $2.36 trillion to support the economy and Japan 108.2 trillion yen ($990 billion). Germany has also provided 756 billion euros ($819 billion) and Italy 435 billion euros. The value of the stimulus packages of Germany and Japan is equal to 20 percent of the GDP of the two countries in 2019. While the US has provided a relief package equal to around 10 percent of its GDP, the value of the fiscal support in Australia represents 9.7 percent of its economic output last year. The fiscal support plans of the countries are the largest since World War II.

Besides large-scale relief, many countries have adopted all appropriate policy tools, including reducing taxes and fees and handing out helicopter money, to support enterprises, households and individuals. The funds are mainly generated by the quantitative easing of the central banks as many countries have vowed to provide the governments with unlimited liquidity, taking down the fence between fiscal and monetary policies.

The countries introducing large-scale fiscal support view the pandemic as "a huge natural disaster" and also "a short-term shock that will pass". The policies are aimed at creating a buffer zone for their economies and societies against the great impacts of the pandemic and restoring social and economic order in the shortest possible time after the shocks.

The effects of the policies are highly related to the duration of the pandemic. Unconventional practices such as handing out helicopter money and the unlimited liquidity provided by central banks can only be adopted temporarily. In addition, large-scale stimulus policies will generate huge debts, making the economic system more vulnerable.

Only after fully recognizing the intentions, costs and side-effects of the stimulus policies of other countries can China make its own choices.

The pandemic has severely affected China's economy. In the first quarter of this year, China's GDP grew by-6.8 percent, which was the first negative growth since the launch of reform and opening-up in 1978. Its fiscal revenue in Q1 fell by 14.3 percent and the tax revenue dropped by 16.4 percent.

Besides environmental protection taxes, all the other taxes saw negative growth by a large margin in the period as central and local financial revenue was severely affected by the pandemic.

Since the outbreak of the novel coronavirus, China's fiscal department has issued many support policies, reducing revenues and increasing expenditures by more than 1 trillion yuan ($141 billion). The most difficult period has passed for the domestic prevention and control work and the spread of the virus has been largely curbed. The major problem is that the rapid spread of the virus worldwide and the slump in external demand are still weighing on China's resumption of economic activities.

To this end, the central government has made it clear that a package of policies will be adopted to boost economic and social recovery, including raising the deficit rate, increasing special local government bonds and issuing special treasury bonds. However, we should bear in mind some facts that make the situation in China different from that in European countries and in the United States.

First, according to the World Health Organization, most European countries and the US are experiencing the initial phase of containing the pandemic to protect economic and social stability. However, China now needs to turn to medium－and long-term economic recovery after having effectively controlled the pandemic.

Second, many companies of other countries have seen capital strains due to the impacts of the pandemic. Therefore, foreign fiscal support policies largely focus on setting up Special Purpose Vehicles to purchase corporate assets and inject liquidity into enterprises in the short term. China's large-scale State-owned enterprises can stabilize its economy amid the crisis. Since China's demands for directly purchasing corporate assets and supporting enterprises is not as urgent as those of Western countries, it needs to focus on key industries and regions as well as private and leading enterprises severely affected by the pandemic.

Third, China needs to improve the leverage effect of fiscal funds. The government is supposed to provide fiscal and financial policy tools such as targeted loans, government guarantees and interest subsidies to improve the effects of fiscal funds. It also needs to promote domestic employment through its relief policies, such as encouraging enterprises receiving fiscal assistance to promise no layoffs.

China needs to leave maneuvering room for policies while boosting the market through reforms. Since the pandemic outbreak this year, the Chinese government has introduced a range of policies at a well-defined pace with high market acceptance. It now needs to seize the opportunities offered by the crisis by connecting the short-term policies of coping with the pandemic and restoring the economy with long-term reform goals.