"Ask China!" - it has become a new buzzword on social media after the US President Donald Trump used it when he clashed with an American journalist at a routine press conference on Monday, which was mocked and slammed by Chinese and foreign netizens. Political farce of passing the buck to China has become a major strategy of Republican Party for the election in November, and more questions are now raised on what should America ask China when the US suffers the world's highest confirmed COVID-19 cases and deaths. 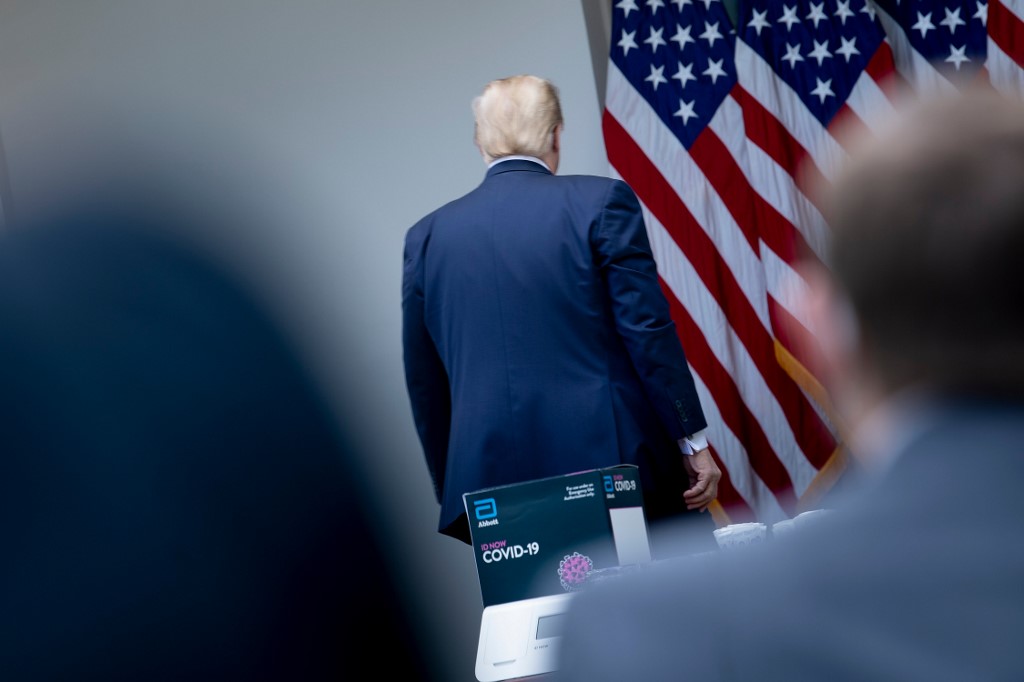 "Don't ask me, ask China!" Trump retorted before abruptly ending the press briefing after an exchange with Weijia Jiang, a CBS News White House correspondent, who asked why the president is "making it global competition if everyday Americans still losing their lives and still seeing more cases." In an apparent attempt to skip the question, Trump told the Asian American journalist to ask China her question, and then left the press briefing. Such behavior has been harshly criticized by the netizens on Twitter and Chinese Weibo as ill-mannered and racist, and the president of the world's only superpower just "ended the press conference and walked out like a child."

"A racist. A sexist. A coward." Intercept columnist Mehdi Hasan wrote in a Tweet on Tuesday.

An England-based Twitter user called Ben Watters pointed out that every press conference is a drama with Trump. "He cannot handle a single line of questioning without deflecting blame, attacking reporters or getting frustrated and losing it. I don't think there's ever been a world leader less of a leader."

When "Trump Meltdown", "Trump Press Conference" or "Trump Gate" have become trending topics on social media, Trump and GOP continued to stick to their playbook, desperately attacking China as a campaign strategy, according to a Republican Party's internal memo, which was exposed on April 24.

The 57-page memo stressed three main anti-China assault messages: "China caused the virus by 'covering it up,'" "Democrats are 'soft on China,'" and "Republicans will push for sanctions on China for its role in spreading this pandemic", according to media reports.

While Trump described the question from Jiang as a "nasty" one, many people are thinking about the same question, as the president owes not only the American public but also people across the world an explanation on why he constantly boasted his "coronavirus success" even though the virus has caused more than 81,000 deaths in the US.

In the midst of this unprecedented crisis, some observers pointed out the pandemic provided more than enough evidence to render a judgment on Trump as one of the worst presidents in US history.

"No speech or word can hide Trump's disastrous failure in response to the epidemic. He asked reporter to ask China and left abruptly, which showed that faced with the fiasco, Trump cannot even lie to himself," Shen Yi, a professor of Shanghai-based Fudan University, told the Global Times on Tuesday. Normal people would never keep complimenting themselves," Shen noted.

Most GOP politicians have been following the same playbook in blaming China - a concentrated smearing plan that has included various types of malicious moves including conspiracy theory, new accusation or old charges with new made-up details, according to analysts. The goal is to hold China accountable and divert public anger from the US administration.

Wilson sent a letter to the leadership of the House and Senate Foreign Relations Committees, Speaker Nancy Pelosi, and Senate Leader Mitch McConnell on Friday along with other leaders calling for the investigation.

Such old-fashioned tactics did not surprise some Chinese analysts, as the House Republicans are forming a task force to look into China's role amid the outbreaks. Some lawmakers have put into actions, like House Republican leader Keven McCarthy and Senate Majority Leader Mitch McConnell who blamed China's cover-up.

Meanwhile, states like Missouri have recently filed lawsuit in seeking compensation from China for the losses caused by the COVID-19.

Over the past three months, instead of responding to the outbreaks in a rational and collective way, the Trump administration has been constantly flip-flopping on its policies, ignoring advice from medical professionals and coming up with willful blindness, groundless accusations, xenophobia and racist comments. It has tried to escape culpability by scapegoating the WHO, China and domestic political opponents.

Trump's "ask China" line showed that blaming China has become his trick when facing an embarrassing situation, or questions that he did not know how to answer at the press conference, Sun Chenghao, an assistant research fellow with the Institute of American Studies of the China Institutes of Contemporary International Relations, told the Global Times on Tuesday.

"Trump has become more grumpy and restless with now everything seems to be going against his will - facing with a bunch of journalists wearing masks who ask provocative questions, the infections inside the White House, and pressure from all sides," Sun said.

Trump has become the top player of the "blame game" who is like a funny blogger now, a netizen called Ruban said on Weibo.

"Ask China always. If some day, one asks who is the founding father of the America, Trump will answer 'ask China'," another netizen said.

More netizens in China are now taking Trump's daily briefing as an event to make fun of rather than an information-sharing occasion. However, there has been a strong shared sentiment of disappointment and disillusion on Twitter and Facebook of how the president of the world's only superpower could descend into a failure, politically and morally.

Instead of controlling the virus from medical and scientific aspect, Trump has always seen the epidemic as a chance to boost his political career. He has screwed up his press conferences, which should be used for public relations crisis management, Sun noted.

"It is the US and the Trump administration that should be asked for several questions at this point: What did they do during the previous two months and how could they totally miss the golden window period to control the epidemic? Why did not they recommend people in the US to wear the mask at early stage? And why are the medical supplies in the US in such short supply?"