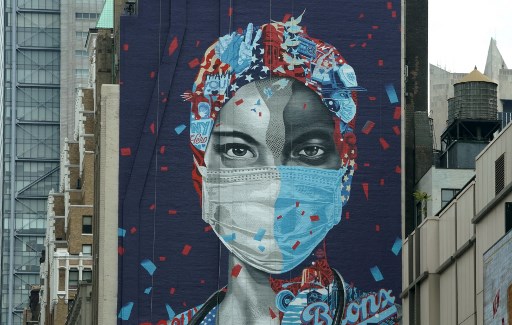 A mural honoring healthcare workers at Montefiore Medical Center in the Bronx is seen on the side of a building in Midtown Manhattan May 11, 2020 in New York. (Photo: AFP) 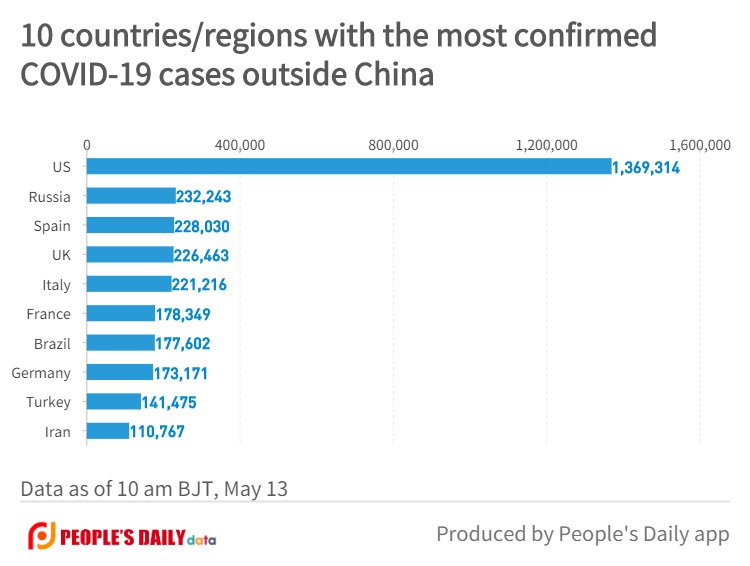 The outbreak has now claimed the lives of at least 82,340 people in the US, the most of any country. The US also leads the world in the number of confirmed infections with 1,369,314, according to a tally by Johns Hopkins University as of 8:32 am BJT on Wednesday.

Russia has confirmed 10,899 new COVID-19 cases in the past 24 hours, raising its total number of infections to 232,243, its coronavirus response center said in a statement Tuesday. The single-day increase has been over 10,000 for 10 consecutive days, the center's data showed. The death toll grew by 107 to 2,116, the statement said.

The Spanish Ministry of Health, Consumer Affairs and Social Services on Tuesday confirmed increases in the number of new deaths and new cases of the coronavirus. The death toll from COVID-19 has increased to 26,920 after 176 people lost their lives over the past 24 hours until 21:00 local time (1900 GMT) on Monday. The Health Ministry reported 426 new infections, compared with 373 new cases reported 24 hours earlier, taking the total number of confirmed cases to 228,030.

Another 627 COVID-19 patients have died in the UK as of Monday afternoon, bringing the total coronavirus-related death toll in the country to 32,692, the Department of Health and Social Care said Tuesday. As of Tuesday morning, 226,463 people have tested positive for the virus in the country, said the department.

The coronavirus pandemic has claimed over 30,900 lives in Italy, bringing the total number of cases combining infections, fatalities and recoveries so far to 221,216, according to the latest data released by the country's Civil Protection Department on Tuesday. The deaths on Tuesday was of 172, bringing the total to 30,911 since the outbreak was first recorded in Italy's northern Lombardy region late February.

France's death toll from the coronavirus reached 26,991 on Tuesday, overtaking Spain's 26,920 as it recorded 348 more deaths in the last 24 hours. France thus became the world's fourth worst-hit country in terms of deaths after the United States, Britain and Italy, data from the Health Ministry showed. The number of confirmed cases rose to 178,349, according to Johns Hopkins University.

Turkish Health Minister Fahrettin Koca on Tuesday announced 1,704 new COVID-19 cases, as the tally of infections in Turkey surpassed 140,000. The total number of confirmed coronavirus cases in Turkey rose to 141,475, while the death toll surged to 3,894 after 53 more deaths were recorded, Koca tweeted.

Iran's death toll from the novel coronavirus has reached 6,733 after 48 more people died from the virus overnight, the health ministry announced on Tuesday. Kianush Jahanpur, head of Public Relations and Information Center of the Ministry of Health and Medical Education, said 1,481 new cases have been confirmed, bringing the total number of confirmed infections to 110,767.