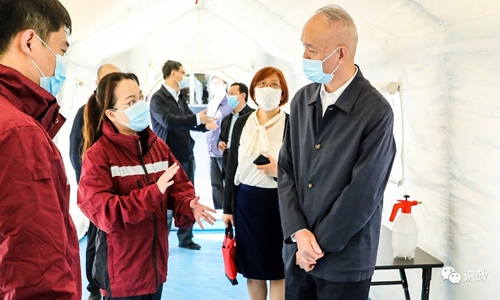 Beijing Party Secretary Cai Qi and Beijing Mayor Chen Jining visited accommodation prepared for delegates who will arrive in the capital for the two sessions kicking off on May 21.

Cai and Chen, as well as other officials, visited the Beijing Hotel on Wednesday morning, checking temperature screening areas, security checkpoints and designated nucleic acid test stations set up in the hotel.

Cai stressed that normalized anti-epidemic work during this year's two sessions is extremely important. He called for the hotel to focus on details and strictly implement the capital's anti-epidemic requirements.

The hotel has prepared disposable gloves, thermometers and ziplock bags at the restaurant, according to media reports.

Deputies of the National People's Congress (NPC) and members of the Chinese People's Political Consultative Conference (CPPCC) National Committee across the country including those from Central China's Hubei Province reached by the Global Times said that they will arrive in Beijing on May 19 and 20. A source told the Global Times that NPC deputies from Hubei have conducted  group quarantine beginning on Wednesday.

The Beijing Hotel was the lodging area for NPC deputies and CPPCC members from Shanghai, Hong Kong and Macao in 2019.