Man who pleaded guilty to rioting gets 4 years in prison 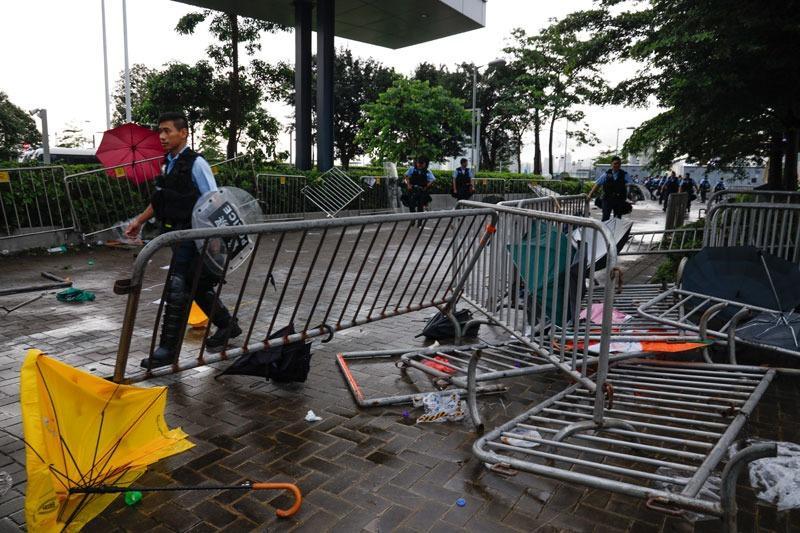 Damaged barriers and debris lie strewn outside the Legislative Council in Admiralty, Hong Kong, in this file photograph dated June 13, 2019 following a mass protest a day ago. (Photo: CHINA DAILY)

HONG KONG - The first suspect to plead guilty to rioting for participating in a violent protest last year was sentenced to four years in prison on Friday.

The sentence was handed down to 21-year-old lifeguard Sin Ka-ho by Judge Amanda Jane Woodcock at the District Court.

Several officers were injured in the melee. A total of 11 people have been arrested.

In passing down the sentence, Woodcock said the "massive and serious" violence used in the riot cannot be tolerated in a civilized society.

Extreme and escalated violence has been used to attack police officers, who were heavily outnumbered by the protesters, she added.

Sin pleaded guilty to the offence on May 4. He denied two other charges of resisting a police officer.

In his plea, Sin said that he regretted what he had done and if he had a chance to talk to young people, he would urge them never to resort to violence.

A total of 8,337 people have been arrested since June 9 in connection to violent protests against the now-withdrawn extradition law amendment bill, police said Thursday.

Among these arrestees, more than 1,600 have been prosecuted — 595 with rioting, 252 with possession of offensive weapons, and 236 with unlawful assembly.

Police Commissioner Chris Tang Ping-keung said last week that 57 people of them had been convicted, including 15 who were sentenced to jail with terms of between two weeks and 14 months.