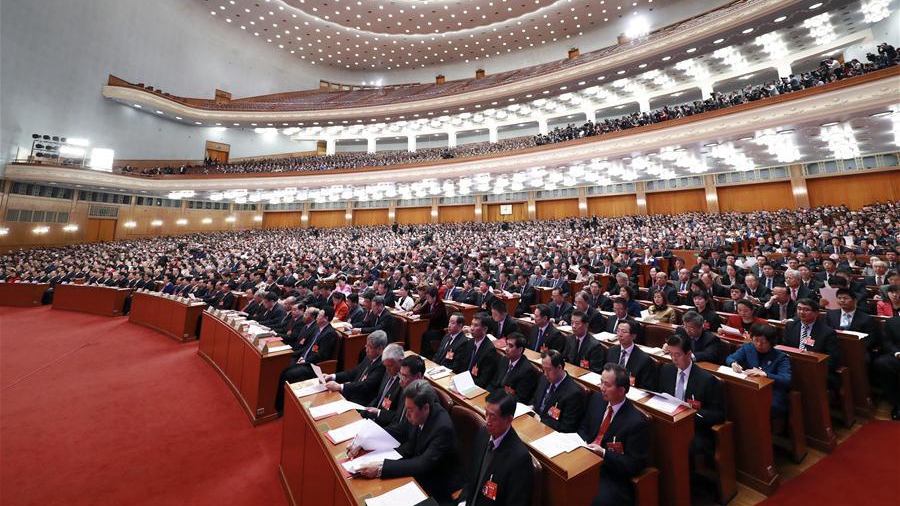 The second session of the 13th NPC holds its closing meeting at the Great Hall of the People in Beijing, China, March 15, 2019. (Photo: Xinhua)

China's top legislature will adjust its arrangements for the upcoming annual legislative session to prevent and control the COVID-19 epidemic and safeguard public health, a senior member of the legislature said Friday.

The third session of the 13th National People's Congress (NPC) is scheduled to open in Beijing on May 22, said Zhang Yesui, chairperson of the Foreign Affairs Committee of the NPC, in an interview with Xinhua.

The duration of the session will be appropriately shortened, Zhang said, adding that the agenda and schedule will need to be approved at meetings before the session.

China's annual legislative session – part of the Two Sessions (alongside the annual session of the country's top political advisory body) – usually takes place in March and lasts over ten days. The second session of the 13th NPC was held from March 5 to 15 last year. The third session has been postponed due to the novel coronavirus outbreak.

Some of the Chinese and foreign journalists in Beijing will be invited to cover this year's NPC session but journalists will not be invited from overseas to come to Beijing for reporting, Zhang added.

News conferences, briefings and other interview activities will be appropriately streamlined and conducted via innovative forms such as video links, he said.

Zhang said the session's news center has received applications from more than 3,000 Chinese and foreign reporters to cover the event, expressing his gratitude to their attention to China's economic and social development and the legislative session itself.

No open-day activities or other group interviews will be held by various delegations, Zhang said. But spokespersons will be appointed by delegations and press liaison officers will assist press interviews. Studios will be set up at the hotels where delegations stay to encourage deputies to be interviewed, he added.

Information as well as main documents in Chinese and foreign languages will be posted timely on the website of the session's press center, Zhang said.

The session is committed to being open and transparent to provide services to Chinese and foreign journalists for news reporting, he said.