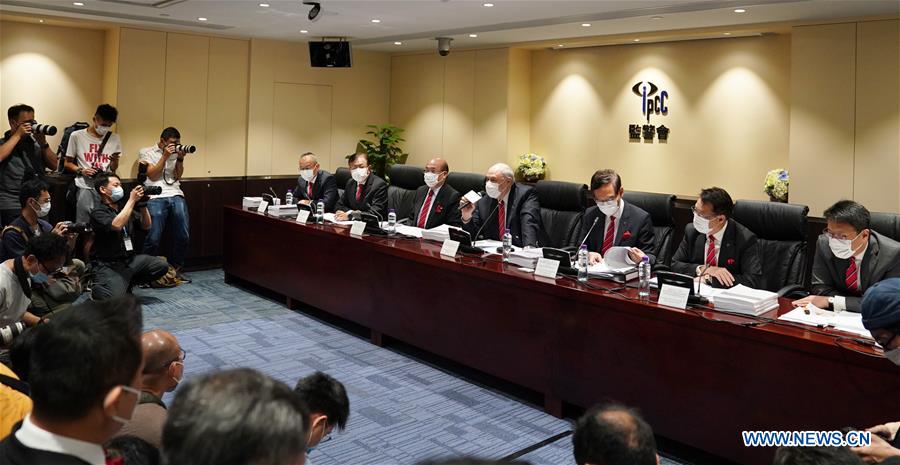 HONG KONG, May 15 (Xinhua) -- A report in regard to the social unrest in Hong Kong released on Friday by Hong Kong's police watchdog concluded that Hong Kong police killing protesters at a metro station on Aug. 31 last year was a rumor.

The unrest, sparked by the now-withdrawn bill regarding fugitives' transfers, began in June last year, then the initial peaceful demonstrations were degenerated into violent protests, according to the Independent Police Complaints Council (IPCC) report.

The report, consists of 16 chapters, collected a large number of facts from large-scale public events from June 9, 2019 to March 2020.

The report found that violent protests happened more frequently after marches and demonstrations, violence has been escalated, early stages of terrorism sprouted, and there had been widespread destruction of public and private property, causing long-term damage to the economy.

Furthermore, a number of people were beaten because of different opinions, and one person was killed amid theses violent acts.

"The protests of the last 10 months have metamorphasised from initial peaceful processions and public meetings to extreme forms of violent protests in the streets," Anthony Neoh, chairman of IPCC said.

While the protests have been characterized by some media and scholars to be "leaderless", there were visible signs of various forms of organization at every violent protest, according to the report.

The report said that the internet was the driving force behind the continuing and escalating demonstrations, where publicity materials, hateful messages against the police and other unfounded rumors being disseminated. The internet has also been used to mobilize people to participate in demonstrations, violent acts and doxxing of police officers and their families. The report covered incidents of high public concern and with many complaints, including the Yuen Long incident on July 21, 2019 and Prince Edward station incident on Aug. 31, 2019.

For the Yuen Long incident, there has been no evidence of police officers colluding with triads. It was a rumor that police killed protesters at Prince Edward station last August, the report said.

The report also suggested that the use of force by the police in handling protests over the past few months was in response to the illegal actions of protesters and to the protection of themselves and others when attacked by violent protesters.

"It is plain for all to see that the violence accompanying the protests of the last 10 months had brought Hong Kong's economy to a precipitous state. The COVID-19 epidemic has deepened our economic woes...Hong Kong has lost its hard-earned reputation as a peaceful city," Neoh said.

"With the outbreak of COVID-19, acts of kindness and community co-operation, conspicuously absent during the months of violence, have resurfaced. Hong Kong remains a community that cares and together we can create a brighter, better future for all," he added.