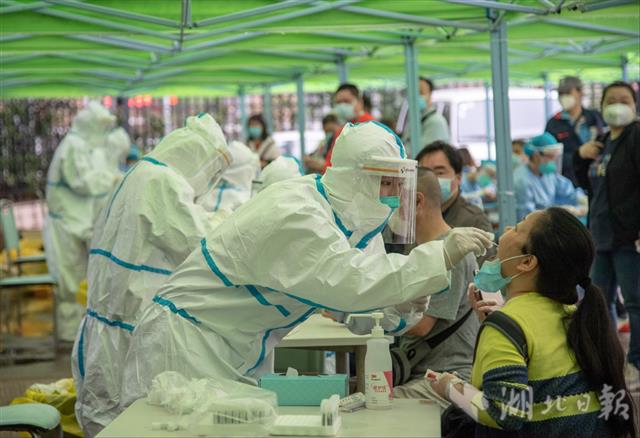 The Wuhan government on Saturday said its controversial citywide testing aims to eliminate fear and discrimination of COVID-19 among its residents, while the cost, which was estimated at 1 billion yuan by some analysts, will be shouldered by the city and district governments.

Wuhan's health commission said that those who have done the nucleic test will not have to do it this time, and advised against testing children below the age of 6. Priority is being placed on residential complexes where there are infections, communities with many elderly residents and those which are densely populated.

Every district has different rules, Zheng Li, a Wuhan doctor, told the Global Times. He said that in Wuchang district, where he works, residents will undergo not only nucleic tests, but also serum antibody tests.

The Wuhan health commission said that the citywide test was launched because of daily reports of asymptomatic cases, which created anxiety among people who had resumed work. It was being conducted in order to better prepare for the city's return to normalcy, to get a clear picture of how many asymptomatic patients there are, and to cut off infection chains as soon as possible.

In order to avoid large gatherings and cluster infections, people from residential compounds are being tested in strict order. Tests must be held in ventilated places, residents should wear masks, and the collectors must change or disinfect their medical gloves every time they finish collecting a sample, according to the Wuhan government.

Zou Furong, a resident of Baibuting community, told the Global Times that residents can only go for testing after being notified by the community. "The testing was well organized. The medical workers constantly reminded us to keep a 1.5-meter safe distance, and they constantly disinfected the place while we were waiting," said Zou.

The Wuhan government said it will be strict in its selection of testing agencies in order to ensure accurate results, while the city and district governments also vowed to set up quality control groups to supervise the results.

It also said the residents' nucleic results will be stored safely in an independent system with strict login requirements to ensure residents' information security.