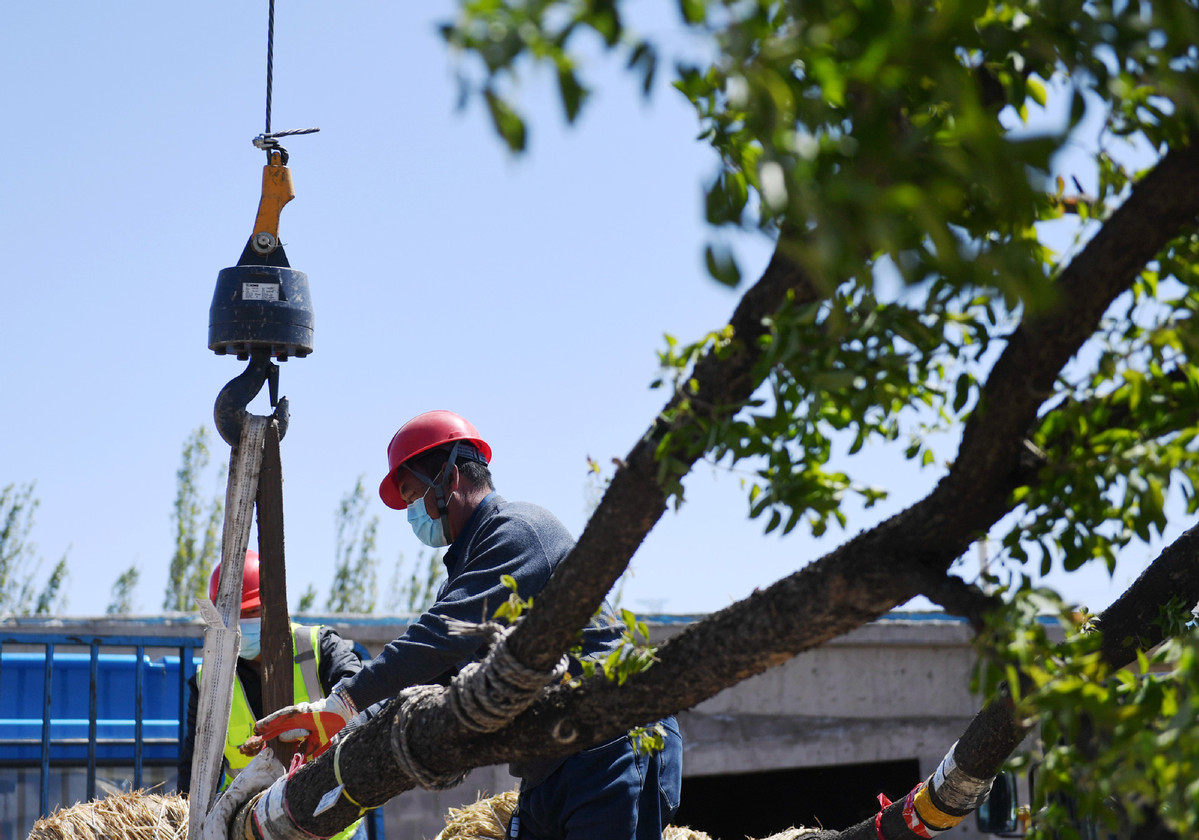 Garden workers are transplanting a tree at the Winter Olympic Forest Park in Yanqing district of Beijing on April 22, 2020. (Photo: Xinhua)

"A greener and better future!" Liu Xinping, an official of the Beijing 2022 General Planning Department, summarized the grand project in one sentence.

Organizers of the Beijing Olympic Winter Games on Friday released a sustainability plan that features three key themes: positive environmental impact, new development for the region and better life for the people.

With the objective to "create a new example for staging events and regional sustainability," Beijing 2022 draws an outline of the 12 sustainable development actions, under which there are 37 key tasks and 119 specific measures.

PROTECT THE ENVIRONMENT, MAKE IT BETTER

"Our vision is sustainability for the future. Ecological protection, resource conservation and carbon footprint reduction are all included in our plan to live in harmony with nature," said Liu, who heads the sustainability division in the department.

The Xiaohaituo Mountain, located in the Yanqing competition zone, is where the Alpine skiing, bobsleigh and skeleton and luge events will be held. During construction of the National Alpine Skiing Center and the National Sliding Center, protecting species diversity on the 2,000 meter-high mountain was a top priority.

"We formed an independent department to address ecological protection and hired an expert team to analyze the potential impact of the construction," explained Liang Dedong, a director from contractor Beijing Enterprises J.O Construction Co., Ltd.

According to Liang, workers built temporary migration paths for local animals and cut short working times during the first phase of construction to ensure animals could migrate freely and safely.

"To our delight, as our construction progressed, many animals returned. Birds were the first ones and we built bird houses for them. Our infrared camera also captured gorals, roe deer, wild boar and other animals that are commonly seen in the area," Liang said.

"This shows that although the entire competition zone covers a large area, we managed to limit the impact only to the site that is under construction at the moment, and animals could live their normal life in the area."

Trees were also protected. When choosing construction sites for the Olympic Village in Yanqing, the company located every tree, marked their locations and tried to avoid them as many as possible.

"When we tried to set up a tower crane, we found one tree had to be cut down if the machine was to be set at the optimal location, so we changed the plan, although it took us quite a lot of effort to re-design," Liang recalled.

"If you go to the construction sites now, you can see there are dozens of trees inside, protected with branches cut, which is quite unusual for such sites."

In fact, in addition to the Olympic Village, all trees in the entire Yanqing competition zone were registered and had their profiles marked with a QR code, explained Liu Xinping.

"We tried our best to leave the trees where they were when we designed the competition courses. If that was not possible, we moved some of them to nearby sites, or transplanted them down to the bottom of the mountain to the Winter Olympic Forest Park," she said.

Starting from 2017, about 24,000 trees - consisting of over 30 species - have already been transplanted, and the 100-hectare park is expected to be complete by the end of May and open to the public by the end of this year.

The Forest Park is also part of the plan for sandstorm control in the host cities, which will also tackle air and water pollution problems as well as decrease the Games' carbon footprint.

Using 100 percent renewable energy to support the operation of venues, natural carbon dioxide refrigeration systems are installed in most of the ice venues, showcasing Beijing 2022's efforts to host a low-carbon Games and respond to the challenges of climate change.

The headquarters of the Beijing 2022 organizing committee, which released the sustainability plan, is a vivid demonstration of sustainability itself. Transformed from a century-old disused steel plant, the Shougang Industrial Park has become an iconic legacy of the Olympic Games and an example of urban regeneration. The park not only hosts the organizers, but also the Games' Big Air venue. Keeping some of the original industrial facilities, it has become an internet-famous site in Beijing and reopened for public visit registration on May 9.

Taking the Winter Olympics as an opportunity, the world's first flexible DC power grid with a ±500 kV four-terminal ring structure will be built to transport renewable energy from Zhangjiakou to Beijing, providing 10 percent of Beijing's total energy consumption.

The coordinated development of the region was also enhanced by the Beijing-Zhangjiakou high-speed rail line, which was put into operation at the end of 2019.

Before this was constructed, ski fanatic Xiao Zhen would spend up to four hours in a shared car or a shuttle bus if she wanted to go to resorts in Chongli, Zhangjiakou from her home in Beijing, but now a trip only takes her 50 minutes.

"I no longer need to make a plan to share a car with others. Now I can just book a quick and comfortable trip for myself on my phone," said the IT company employee. "The high-speed rail link make it possible for me to practise more and hopefully I can become a better skier."

Besides improved accessibility and infrastructure, to ensure service of all three competition zones is up to the required standard, the host cities of Beijing and Zhangjiakou will enhance cooperation in various aspects including public services and urban management.

For Chang Guangchun, a villager in Yanqing, the Games represents a great opportunity for her to welcome more tourists to her farmyard near the venues.

"I heard the finish line of the Alpine skiing event is just in front of my home. After the Winter Olympics, we will be able to attract tourists in winter and have higher income," said Chang. "The Games will also bring us more jobs and welfare."

In Chongli, nearly 30,000 of its 126,000 population are employed by ski resorts or related companies and organizations. In May 2019, the district was officially lifted out of poverty.

With a campaign to engage 300 million people across China in winter sports, more facilities are being built across the country, and the winter sports and leisure industries are expected to witness a considerable boost, which will create more job opportunities. In the meantime, more accessible facilities and greater engagement in sports will encourage people to live healthy lifestyles.

"Only by keeping sustainability in mind can we deliver our promise to host a green, inclusive, open and clean Games," said Zhao Yinggang, Deputy Director of Beijing 2022 Sustainability Advisory Commission.

With the Beijing 2022 in less than two years' time, sustainability will continue to be a key theme of the preparation for the Games and for the development of the host cities and the country in the years to come.