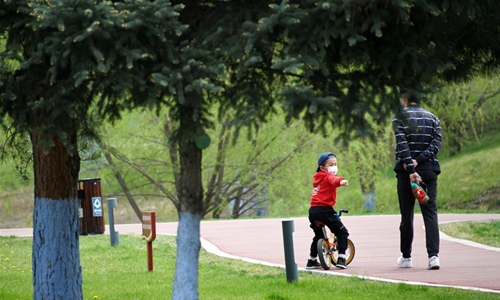 People take a walk at a park. (Photo: Xinhua)

People in North China's Shanxi Province will face fines if they spit in public places, after the province passed legislation banning the bad habit, as it is considered a threat to public health amid the COVID-19 epidemic.

The regulation was passed by the Standing Committee of the 13th People's Congress of Shanxi Province, the local legislature, and prohibits spitting in public places such as cultural and sports venues, medical and health centers, education and teaching workplaces, enterprises and institutions.

Those who spit and refuse to clean their sputum face fines of between 100 and 500 yuan ($70). Spitting in public is widely seen in China.

People should also cover their noses when coughing or sneezing in public places. When spitting, they must wrap their sputum in tissue paper and put it in the trash. The regulation also requires people who suffer from infectious respiratory diseases to wear masks in public places.

Sanitation workers, traffic officers and individual citizens are encouraged to report people who continue the bad habit, and those who inform on them will be rewarded, according to the regulation.

The local government will also establish an administrative punishment record system to record the violators into the public credit information system and expose their actions to shame them.