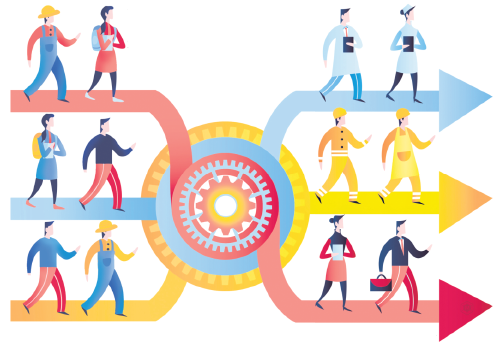 So huge has been the impact of the novel coronavirus outbreak on China's economy that its GDP declined 6.8 percent in the first quarter of this year and the urban surveyed unemployment rate in March increased to 5.9 percent, indicating the job market faces severe challenges.

That the pandemic situation in other countries is still serious shows employment risks could increase not only in China but also in the rest of the world. The pandemic has already rendered more than 30 million people in the United States jobless. Complicating the situation further are the forecasts of several international organizations that 2020 could see the global economy slip into recession.

Although China has implemented a series of employment policies that have achieved preliminary success, the Chinese economy, especially its job market, faces increasing pressure because the epidemic situation abroad is yet to improve. Therefore, the authorities should further strengthen support to special groups of workers by creating more jobs.

Based on the existing employment promotion policy, the authorities should take measures to ensure talents are judiciously posted in jobs across impoverished and grassroots regions, by filling or creating vacancies for teachers of basic education. The government should also launch employment projects in specific industries and regions to not only create new jobs but also promote the career development of talents. And measures should be taken to accommodate college graduates in different sectors within a certain period or enroll them in postgraduate courses or help them seek higher studies abroad.

The central and local governments should also start interviewing candidates for civil servants' posts soon, and public institutions and State-owned enterprises must accelerate their recruitment process. And while special employment projects for college graduates should start early, colleges and universities need to use digitalized admission procedure to accelerate the enrollment of postgraduate students.

Besides, the central government is also according priority to migrant workers and making efforts to ensure they return to work soon, because it knows migrant workers' employment is important also for their families. According to National Bureau of Statistics data, migrant workers have suffered most due to the outbreak, because many of them are self-employed or flexibly employed, and a majority of those who traveled home during the Spring Festival holiday are yet to return to the cities where they worked.

Resuming normal economic operations is the most effective and important way of guaranteeing employment to migrant workers. According to data from the Ministry of Industry and Information Technology and National Development and Reform Commission, by April 14, the rate of work resumption was as high as 99 percent for industrial enterprises above the designated size, and more than 80 percent for small and medium-sized enterprises. And by the end of March, more than 90 percent of key construction projects had restarted operations.

Still, export-oriented sectors that employ a high percentage of migrant workers should create more posts and ease the employment pressure. In this context, the Ministry of Human Resources and Social Affairs launched an online service platform on Feb 24 to address the supply and demand issue of migrant workers, and help them return to work.

As the new generation technological revolution represented by digital technologies such as internet, big data, cloud computing, artificial intelligence and blockchain has brought about drastic changes to Chinese society and economy, a new digital economic model, characterized by advanced digital skill requirements from workers, has been gradually formed. And with the coronavirus outbreak accelerating the digital technological revolution, the unemployment risks for people who lack digital skills has increased further.

Therefore, the government should launch specific programs to train workers in digital skills, in order to improve their chances of seeking jobs, expediting the digital economic revolution and boosting the economy.

The author is the dean of the School of Labor and Human Resources, Renmin University of China.