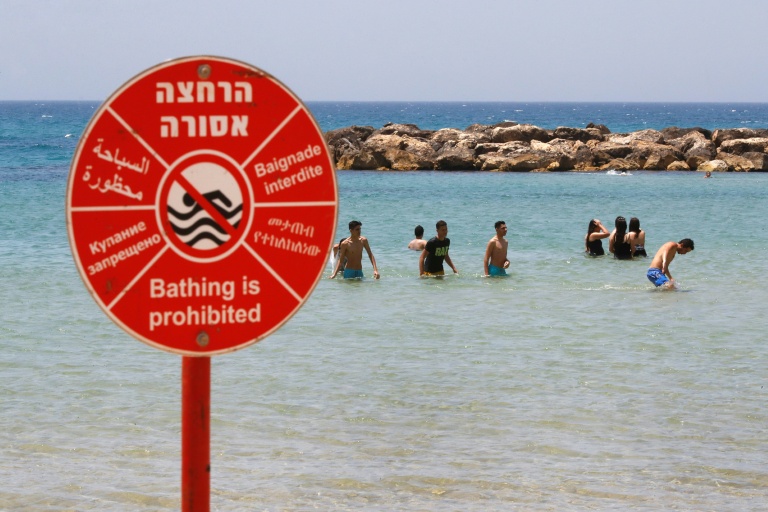 People cool off in the water despite a warning sign prohibiting bathing along the Mediterranean off Israel's coastal city of Netanya. (Photo: AFP)

Across the Mediterranean with its tantalising beaches, a record heatwave has hit countries just as they cautiously ease COVID-19 lockdowns, stoking hopes the new season will help fight the virus.

The mercury has shot above 40 degrees Celsius (104 Fahrenheit) and the suffocating heat since the weekend is forecast to run for several more days.

On the holiday island of Cyprus, poised to further ease lockdown measures this week, authorities issued a "yellow warning" for a second consecutive day on Monday over extreme temperatures.

On Sunday, the temperature climbed to a sizzling 42.5 degrees in Paphos, the hottest ever recorded in Cyprus during May.

Meteorologists say a high-pressure system from the Atlantic has been blasting its way across North Africa all the way to the eastern Mediterranean.

As Cypriots flocked to the beaches, 49 people were fined Sunday for breaking a "swimming-only" decree on social distancing that bans sunbathing.

A video on social media sparked accusations of police using "excessive force" in an incident on a Limassol beach that led to four arrests.

Authorities on both sides of the divided island -- the breakaway north is recognised only by Turkey, while the south is an EU state -- battled several fires over the weekend.

A firefighting plane was sent from the south to help efforts in the north, Cypriot media reported.

A member of the Cyprus government's Scientific Advisory Committee, Peter Karayiannis, gave a cautiously optimistic reading of the impact of the latest apparent sign of global warming.

"I think the heat is on our side," the professor in medical microbiology said, referring to the impact of the heatwave on the fight against coronavirus.

"If someone is sick... droplets are not going to stay wet for long... and the virus will be inactivated," he said, according to the Reporter, a Cypriot website.

Around the Mediterranean, the temperature on the southern Italian island of Sicily hit 39 degrees at the weekend, while 41.1 degrees was recorded for the first time in half a century on Saturday on the Greek island of Crete, meteorologists said.

Social distancing measures are in effect on Greek beaches, which as elsewhere have been deprived of foreign tourists because of travel bans imposed since March to curb the spread of the COVID-19 pandemic.

Parasols have been placed four metres (13 feet) apart and drinks are served by staff wearing gloves and masks, but without table service.

In Israel, temperatures also hit 40 degrees on Sunday and Monday in the coastal city of Tel Aviv, but are forecast to fall gradually through the week to a cool 22 by Sunday.

Under virus restrictions, Israeli beaches are out of bounds but authorities appeared to be turning a blind eye during the heatwave.

After a six-week-old lockdown, people over the age of 65 in Turkey were allowed to go out for a second Sunday in a row, although the permitted hours were shifted to take account of the heatwave.

In Istanbul, some of Turkey's older citizens bathed in the Bosphorus on Sunday.

The heat wave brought with it insect infestations in several areas of Lebanon and public health advice to cut back on the use of sanitisers under the sun.

"We are used to heat waves in May, but the difference this year is that it's lasting a week... and coinciding with temperatures of up to 37 degrees," the weather department head at Beirut airport, Abdel Rahman al-Zawawi, told local television.

Lebanese beaches remain out-of-bounds but private pools were allowed to open on Monday.