BUSINESS China to drive global GDP growth this year and next

China to drive global GDP growth this year and next 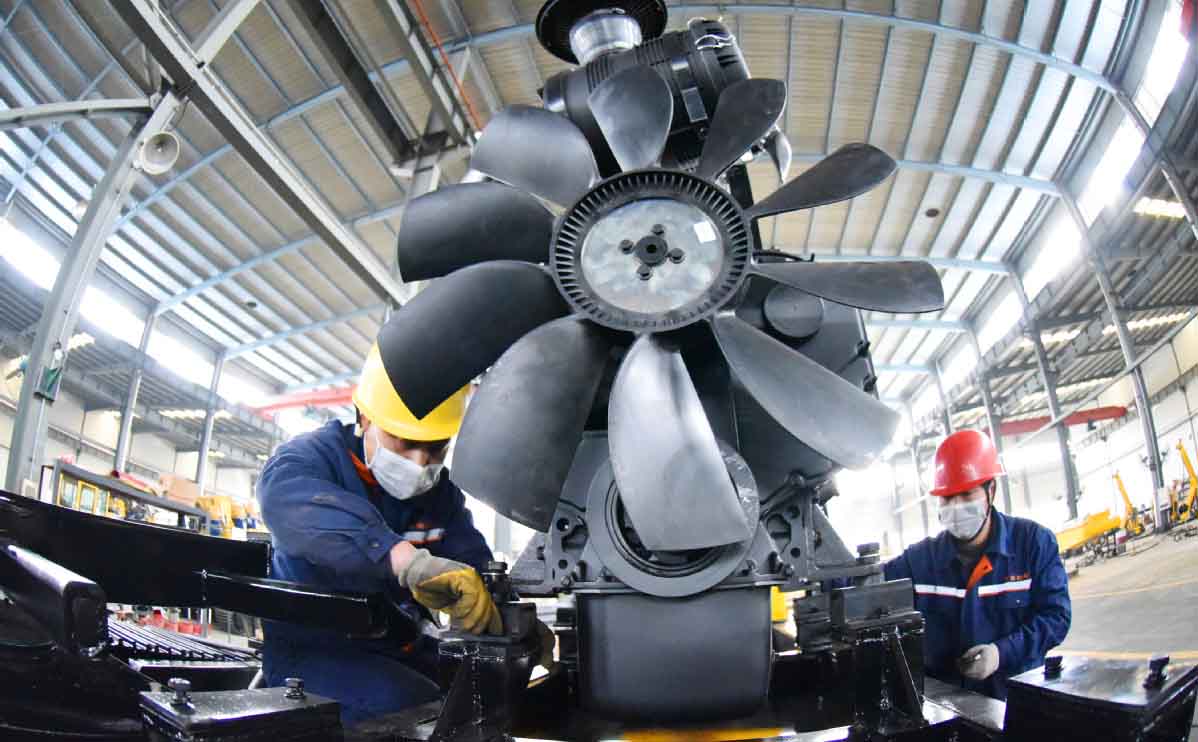 Workers assemble an industrial turbine at a factory in the Haizhou Economic Development Zone in Lianyungang, Jiangsu province, in May. (Photo: China Daily)

China is one of a few large economies expected to expand and substantially contribute to global GDP growth in 2020 and 2021, said the authors of a latest report jointly issued by Oliver Wyman and Silk Road Associates.

"Even with manufacturing challenges and the potentially longer and more pervasive challenges that may exist in some of the service sector, we still see growth across China and that being a key source of global growth," said Peter Reynolds, partner and head of Oliver Wyman China.

"We've seen a relatively quick rebound, a V-shaped bounce, in manufacturing. Well over 90 percent of the factories are now back online, and many of them continue to be working to fulfill the backlog of orders that existed as the shutdowns over the Chinese Lunar New Year and their off period came through," Reynolds said.

Imports of various supplies, essentially the raw materials used in manufacturing, remained very robust throughout the period, allowing the manufacturing rebound to happen.

China's value-added industrial output declined 8.4 percent year-on-year in the first quarter as industrial production was seriously affected by the novel coronavirus outbreak, according to data from the National Bureau of Statistics.

"If you add the Chinese Lunar New Year break, plus the additional couple of weeks that things were stopped, you actually have 17 percent less operational time. So we actually see that 8.4 percent reduction as being quite a positive result in the light of the amount of time the factories needed to shut from a manufacturing side of things," Reynolds added.

"The different economic sectors and regions within China will experience varying paces of recovery, and competing influences will shape the path of growth over the next 12 months depending on the sector concentration in each region," he said.

The recovery of the overall Chinese economy tends to be concentrated in certain areas, according to data comparing changes in pollution levels over a 12-month period for 650 urban areas, said Ben Simpfendorfer, founder and CEO of Silk Road Associates, an advisory services provider.

Some pollution was identified in the Yangtze River Delta, suggesting that the recovery in coal-fired power plants and State-owned industries, especially heavy industries, was more intense there, he said.

From early to mid-February, analysts saw the return of migrant workers, particularly in Shenzhen and Guangzhou, Guangdong province.

"That was quite striking to us－the fact that those migrant workers were quick to come back to the southern manufacturing hub. Their return to the more eastern coastal manufacturing hubs, particularly Wuxi, Suzhou and Ningbo, was slightly delayed, underscoring regional and municipal level differences, partly driven by demand but also the municipal level restrictions on mobility and social distancing," Simpfendorfer said.

The report said there is a risk of a broad global recession leading to demand-driven contraction, which could lead to a more prolonged L-shaped recovery path for China. However, China's reliance on exports is much reduced relative to the time of the global financial crisis of 2008-09. The share of exports to GDP has fallen significantly since that crisis.

Although exports will struggle with global demand falling, the offsetting impact of imports－especially in a very low oil price environment－will have a relatively substantial mitigating effect against the decline of exports, Reynolds said.

The services sector will experience a more U-shaped recovery, with retail sales down 19 percent year-on-year in the first quarter. Within that, analysts saw a huge difference among various types of retail and services delivered through different channels. They are seeing a permanent shift to a "new normal" where digital segments become a significantly larger portion of services delivery.