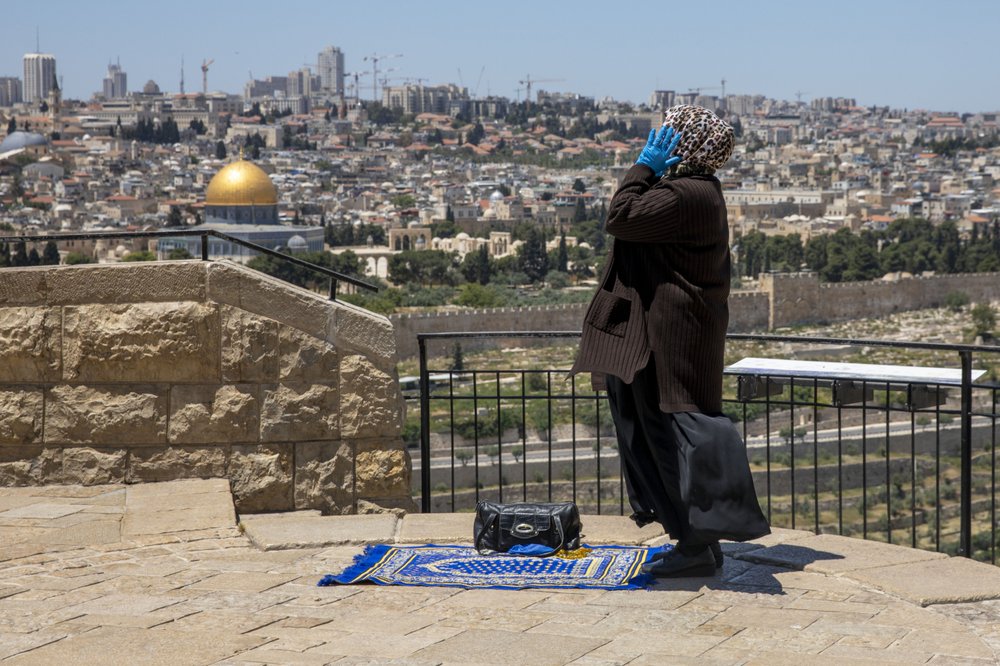 A Muslim woman wears gloves prays in east Jerusalem's Mount of Olives, overlooking the Dome of the Rock and al-Aqsa mosque compound, which remains shut to prevent the spread of coronavirus during the holy month of Ramadan, Friday, May 1, 2020. (Photo: AP)

Etihad Airways said Tuesday it would fly aid for the Palestinians amid the coronavirus pandemic from the capital of the United Arab Emirates into Israel, marking the first known direct commercial flight between the two nations.

The flight comes as the UAE, home to Abu Dhabi and Dubai on the Arabian Peninsula, has no formal diplomatic ties to Israel over its occupation of land wanted by the Palestinians for a future state.

However, it marks an open moment of cooperation between the countries after years of rumored back-channel discussions between them over the mutual enmity of Iran.

“Etihad Airways operated a dedicated humanitarian cargo flight from Abu Dhabi to Tel Aviv on 19 May to provide medical supplies to the Palestinians,” the airline told The Associated Press. “The flight had no passengers on board.”

In the past, private and diplomatic planes often had to travel to a third country before heading onto Israel.

Emirati government officials did not respond to multiple requests for comment.

The UAE’s state-run WAM news agency later issued a statement saying it delivered 14 tons of protective gear, medical items and ventilators “to curb the spread of COVID-19 pandemic and its impact in the occupied Palestinian territory.” It did not acknowledge the flight nor its significance.

The Israel Airports Authority confirmed the cargo flight would be landing at Ben Gurion on Tuesday evening.

An Israeli official said the flight would be delivering humanitarian aid provided by the UAE to the Palestinians and that the cargo flight was coordinated with the Israeli government. The official spoke on condition of anonymity due to the sensitivity of the subject.

Neither the Gaza Strip nor the West Bank have their own airports, meaning most cargo bound for Palestinian territory must enter through Israel. That likely required an airlift of the material from the UAE, which hosts humanitarian stockpiles for the United Nations.

The UAE, a federation of seven sheikhdoms founded in 1971, had no significant history with Jews. While not acknowledging Israel diplomatically, Emirati officials have allowed Israeli officials to visit and the Israeli national anthem was played after an athlete won gold in an Abu Dhabi judo tournament. Israel also has a small mission representing its interests at the International Renewable Energy Agency in Abu Dhabi.

Next year, Israel will take part in its delayed Expo 2020, the world’s fair being hosted by Dubai. A secret synagogue also draws practicing Jews in Dubai. The UAE also has announced plans to build the Abrahamic Family House in Abu Dhabi, which will house a mosque, a church and a synagogue.

The extent of Gulf Arab ties with Israel is still mostly kept private, though. Saudi Arabia and the UAE have allegedly used Israeli spyware to go after government critics.

Oman, which has ties with Iran, hosted the Israeli prime minister in a surprise visit in 2018 that served to remind Washington of its unique ability to be a conduit for talks.

But such ties remain highly contentious among the Arab public, particularly as the Palestinians remain without a state of their own despite decades of talks.

Tensions also rose between Israel and the UAE after suspected Mossad assassins killed a top Hamas operative in a Dubai hotel room in 2010, something never acknowledged by Israel. In the time since, however, Israelis traveling with Western passports routinely enter the UAE without a problem, though one still can’t make a phone call between the two countries.

Israel and the Palestinian Authority imposed sweeping lockdowns in mid-March aimed at containing the virus, limiting travel and public gatherings and forcing nonessential businesses to close. Many of the restrictions have been lifted in recent weeks as the rate of new infections has declined.

The virus causes mild to moderate symptoms in most patients, who recover within a few weeks. But it is highly contagious and can cause severe illness or death, particularly in older patients or those with underlying conditions.

The Al-Aqsa mosque in Jerusalem, the third-holiest site in Islam, will reopen next week after the conclusion of a major holiday marking the end of the holy fasting month of Ramadan. It follows weeks of closure aimed at preventing the spread of the coronavirus. It had been closed since March over the virus.

Meanwhile on Tuesday, Etihad also acknowledged it had fired staffers over the pandemic grounding flights worldwide.

“It is clear the demand for travel in the near future will be significantly reduced and as a result we must make difficult decisions to ensure Etihad will weather this storm,” the airline said in a statement, without offering any details.

Since 2016, Etihad has lost a total of $5.62 billion as it struggles to restructure.