OPINIONS Daredevilry is risky, but the show must go on

Daredevilry is risky, but the show must go on 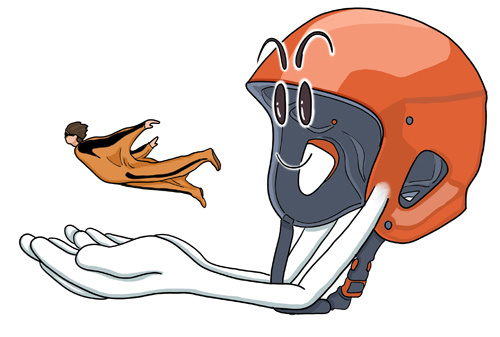 Tourism authorities in the Zhangjiajie scenic region of central China's Hunan province said on Monday night that rescuers had found the body of a woman surnamed Liu, a wingsuit flyer who lost contact with ground control after her parachute failed to open on May 12.

Liu was performing the stunts for a short documentary film on various kinds of extreme sports. Reports said she deviated from her planned route and lost contact when she and another wingsuit pilot jumped from a helicopter flying at an altitude of approximately 2,500 meters.

The film crew deployed helicopters and drones to look for Liu. Local government authorities and villagers too joined the operations, searching for three hours before finding Liu's body amid trees.

Extreme sports involve risks that can be life-threatening for the participant, but then they also receive professional training beforehand. Liu had performed hundreds of wingsuit flights and skydives.

Those taking part in extreme sports are not, as some people say, irresponsible. They are just trying to push the boundaries of human ability while performing stunts. And backing them is a professional training industry and other support; wingsuit flyers, for example, have auxiliary parachutes, just in case the main ones fail to open.

However, all these devices and measures cannot ensure 100 percent safety, and even the best sportsperson, such as Liu, face risks to life. Some reports said she was not carrying a GPS or communication device; not even a smartphone that would have helped find her sooner and give medical attention. That's why safety can never be overemphasized when it comes to extreme sports. Any oversight or neglect can prove fatal.

Liu's death is, definitely, a big loss for the sport. However, it is only to be hoped that technology improves, training is more intensive to minimize risks and stricter safety measures are in place in the future, as humans will continue to play extreme sports.