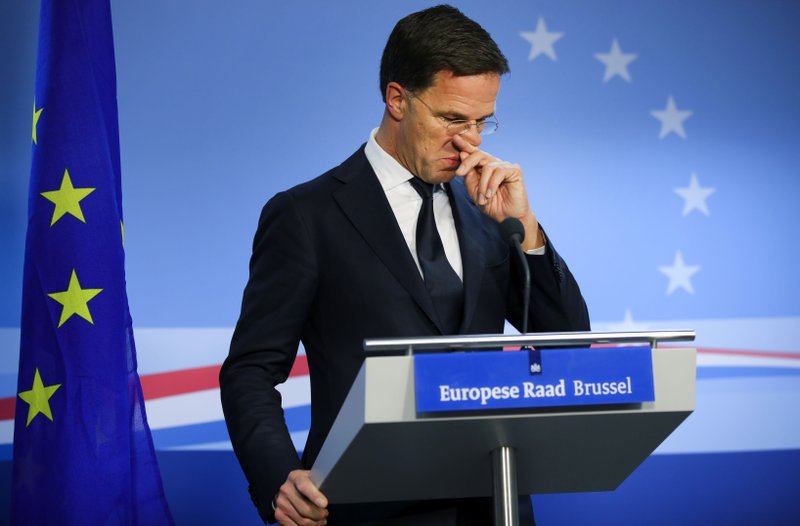 In this Friday, Feb. 21, 2020 file photo, Dutch Prime Minister Mark Rutte speaks during a media conference at the end of an EU summit in Brussels. European Union leaders are preparing for a new virtual summit, which will take place Thursday, April 23, 2020, to take stock of the damage the coronavirus has inflicted on the lives and livelihoods of the bloc's citizens and to thrash out a more robust plan to revive their ravaged economies. (Photo: AP)

Living up to their reputations for budgetary frugality — the Netherlands, Austria, Denmark and Sweden are working on a proposal for a European recovery fund that will have tough conditions attached for countries that seek financial help.

And it could derail or water down a French-German plan presented Monday that was seen as a groundbreaking way to deal with the economic fallout of the coronavirus crisis.

Dutch Prime Minister Mark Rutte on Wednesday mentioned - but pointedly did not endorse - the French-German proposal for a 500 billion euros ($550 billion) fund that would see countries borrow together and make outright grants to help countries through the recession. That plan, laid out by leaders Emmanuel Macron and Angela Merkel, goes beyond an earlier rescue package based on loans that would have to be paid back someday.

By endorsing common borrowing and direct cash help, the French-German blueprint is viewed by some as a step toward stronger EU financial links, as the 27-country union faces challenges not just from the virus crisis, but from populist forces in member countries Hungary and Poland.

Asked about it, Rutte called the Merkel-Macron suggestion, “a proposal. We’re also working on a proposal. We’re working closely with Denmark, Austria and Sweden. There will be a lot of proposals.”

The European Union’s executive commission is expected to unveil its own proposal for a recovery fund next week, based on which the EU member states will then have to find a compromise.

The Netherlands has always taken a tough stance on economic aid for struggling southern European nations and the coronavirus pandemic does not appear to have changed that.

Without going into detail, Rutte said the proposal by the nations dubbed by some the Frugal Four would likely include tough conditions for loans.

“If you want help, you have to make far-reaching reforms so that you can look after yourself next time,” Rutte told reporters. “Otherwise I can’t explain it to the Netherlands that we want to help.”

Rutte acknowledged that there is an economic interest for a trading nation like the Netherlands in southern Europe recovering from the hammer blow of the coronavirus crisis.

“But if they ask for our support, the least we can do is ask: What are you going to do to ensure that you can save yourselves next time?” he said.

Macron and Merkel said that the fund they propose would send money starting in 2021 to the areas hardest hit by the virus outbreak and target sectors that are priorities for EU economic policy such as digitalization and fighting climate change.

The fund would be a one-off part of the EU’s budget and take advantage of EU institutions’ ability to borrow at extremely low interest rates for long periods. It adds to a 540 billion-euro package agreed among finance ministers from the 19 EU countries that use the euro. That included loans from the eurozone bailout fund that would have to be repaid.

Since the proposal is only for a limited one-time fund during a crisis, it would represent incremental change. But some were seeing it as potentially the harbinger of more EU central spending.