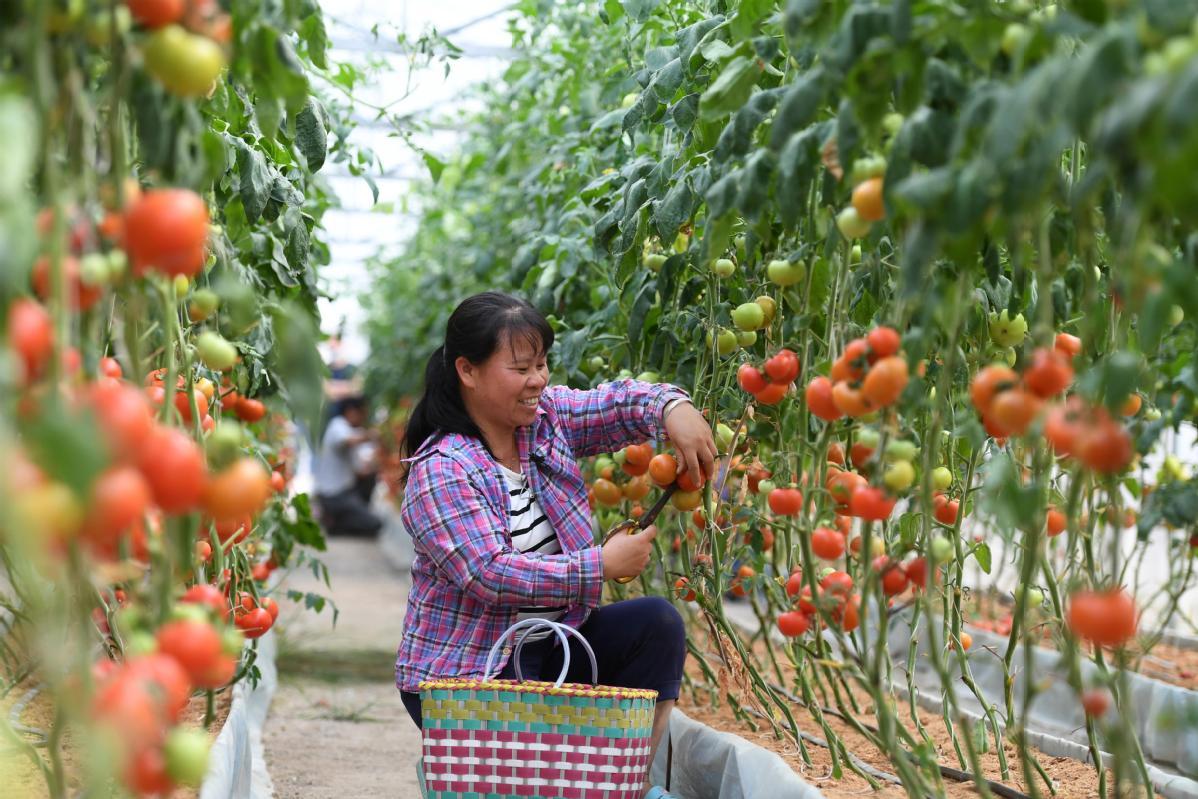 A farmer picks tomatoes in a greenhouse in Tangwan, a village in Huanjiang Maonan autonomous county, Guangxi Zhuang autonomous region, on May 12. (Photo: xinhua)

President Xi Jinping has urged efforts to ensure that the targets and tasks of poverty elimination are completed with high quality amid the COVID-19 pandemic.

Not a single ethnic group will be left behind in China's efforts to build a moderately prosperous society in all respects this year, he said.

Xi made the remarks in a recent instruction on the elimination of poverty of the entire Maonan ethnic group.

The Maonan are one of the country's 28 ethnic groups with a small population. About 70 percent of the Maonan, or 64,500 people, live in Huanjiang county, the Guangxi Zhuang autonomous region.

Huanjiang officially withdrew from the national list of impoverished counties this month. Based on the Maonan people's poverty alleviation situation across the country, the ethnic group as a whole has risen above poverty.

Xi said he was glad to know that the Maonan ethnic group has eliminated its poverty, as the living conditions of villagers have significantly improved.

He called the poverty elimination of many ethnic groups in recent years an important achievement in China's anti-poverty work.

The Maonan people should consider poverty elimination a new starting point for a better life and continue with efforts to make their lives more prosperous, Xi said.

Given that China has come to a crucial period of securing a decisive and complete victory in poverty elimination, it is especially important to proceed with firm confidence and concrete action, he said.

Xi, who is also general secretary of the Communist Party of China Central Committee and chairman of the Central Military Commission, instructed authorities at all levels to steadfastly implement the decisions of the CPC Central Committee, overcome the effects of the COVID-19 outbreak, concentrate efforts on addressing difficult tasks in poverty elimination and take multiple measures to consolidate gains.

Representatives of the Maonan ethnic group in Huanjiang recently wrote a letter to Xi, sharing with him the joy of poverty elimination and expressing their firm determination to follow the Party and make persistent efforts to build their hometown.

"I was unable to receive much education when I was young, but a dozen of my friends in the town encouraged me to write a letter to President Xi to tell him that our lives have greatly improved with the help of government and how grateful we are," the 44-year-old said.

Thanks to the local government's preferential policies to promote fruit crops, Tan and her husband managed to rent 2.3 hectares of land. They started to grow tangerines with a 100,000 yuan interest-free loan in 2015.

In 2018, Tan set up an agricultural cooperative by organizing 60 households, 14 of which were poverty-stricken families, to grow tangerines. Their 18.7-hectare plantation brought in an annual income of about 1 million yuan last year.

Tan said she was greatly inspired and is now more confident about the future after Xi affirmed their achievements in poverty elimination.

Huang Rongbiao, Party secretary of Huanjiang county, said the villagers will not be satisfied just with being lifted out of poverty.

"We will continue to consolidate our achievements, boost morale and fully revitalize rural development in all aspects, including industry, culture and ecology, so that our lives become better and better," he said.