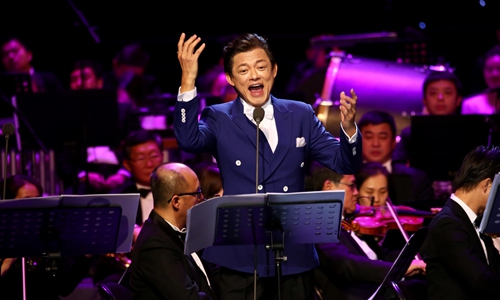 After recovering from COVID-19, renowned Chinese tenor Warren Mok said he is more confident than ever that humanity will beat the virus and called on the government to ease the 14-day quarantine restrictions for those traveling between the Chinese mainland and Hong Kong.

During an interview with the Global Times on Monday, Mok, who lives in Hong Kong, said he has already returned to work following a total of 38 days in hospitals in Bangkok and Hong Kong and that he is not experiencing any aftereffects.

"The virus can harm a human's lungs, but since I have recovered, I can sing just like I used to," Mok said, sounding in high spirits. He noted that his experience shows that people should be cautious when it comes to the virus, but not live in terror of it.

As the situation in Chinese mainland has improved, Mok suggested that the 14-day quarantine of people who travel from Hong Kong to the mainland and vice versa should be shortened as it "hinders communication between the two places."

Since March 27, all people entering the mainland via the ports of Guangzhou must undergo nucleic acid testing and intensive medical observation for 14 days, during which time they must pay for their own accommodations, Chinese language newspaper Ta Kung Pao reported.

After being treated in Bangkok, Mok flew to Hong Kong on April 12 for continued treatment. He praised the city's epidemic prevention measures.

Although restaurants in Hong Kong have not closed amid the epidemic, other indoor entertainment sites such as bars and live theaters have closed, Mok said.

As the situation has improved, restaurants have been permitted to allow up to eight people at a table as opposed to four, while cinemas are operating at 50 percent capacity.

"But other indoor performance venues such as live theaters are not allowed to open, which has hurt related industries including musicals."

In addition to official preventive measures, Hong Kong residents have maintained strong self-protection awareness. Most people on the street  wear face masks, which was very different from what Mok experienced in New York in March, when it was rare to see people wear face masks.

"There is something wrong with the government's publicity, which caused a lack of prevention awareness among US residents," Mok said.

As a survivor of COVID-19, Mok appealed for people not to discriminate against those who have recovered from the disease as they have antibodies that make them safer to be around than others.

Hong Kong residents do not discriminate survivors of the disease, Mok said.

"I was worried that my friends would mind that I had been infected, but they get along with me just like before."

Mok condemned those who blame Chinese people for introducing the virus to the world, saying they are acting unreasonably and just trying to find a scapegoat to blame.

"China alerted the world to the epidemic in January but New York did not close any public places nor prohibit any activities until March. Why did they not take measures during those two months?"

Mok added that the US banned people with Chinese passports from entering the country on February 1, so the blame clearly doesn't lie with China if it failed to control the pandemic after that.

He emphasized that all Chinese people including residents of Hong Kong, Macao and Taiwan should work together to fight against the pandemic and criticize groundless accusations.

Mok said he is sure he was infected with the virus in New York, since while there he went to many public places while not wearing a face mask.

While sitting on the airplane to Bangkok back in March, he felt that his pulse had increased considerably and that he was feeling very warm. After arriving at the Bangkok airport, his temperature had reached 38.2 C, so he was then tested for COVID-19, with the results returning positive.

During his 26 days in a small public hospital in Bangkok with only around 100 beds, Mok lost his senses of smell and taste, while his stomach reacted violently to the medicines the doctors were using to treat him.

With the help of Thai doctors and nurses, Mok finally defeated the virus. After testing negative, he flew back to Hong Kong. However, his ordeal did not end there as he later tested positive for COVID-19 again and was sent to Pamela Youde Nethersole Eastern Hospital.

The doctors in Hong Kong said that they believed his positive test result was probably due to lingering traces of the virus in his system and was unlikely to the result of reinfection.

He did not need to take any medication during his 12 days at the hospital, which required him to test negative for two consecutive days before he could be released.

"I have never been in the hospital for such a long time. I couldn't even leave my room, so I felt extremely bored all day," he said.

Mok finally got the all-clear and was discharged on April 24.

He noted that his fight against the virus impressed upon him the value of good health.

Mok is the founder and artistic director of Opera Hong Kong, and has a repertoire of 50 operatic roles, including Calaf in Turandot, Cavaradossi in Tosca and Don José in Carmen.