Trump threatens to withhold funding to states over mail-in voting 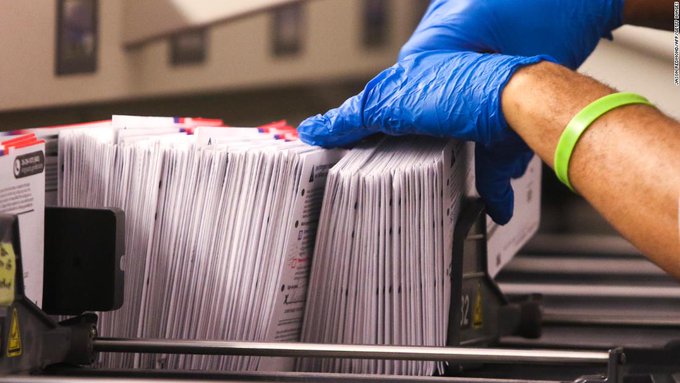 WASHINGTON, May 20 (Xinhua) -- U.S. President Donald Trump on Wednesday threatened to withhold federal funding to the states of Michigan and Nevada over their plans to use mail-in voting in elections.

In a number of tweets, Trump claimed that Michigan is "illegally" sending absentee ballot applications to millions and that Nevada is creating "a great Voter Fraud scenario" by sending out "illegal vote by mail ballots."

"Mail-in ballots are a very dangerous thing ... they're subject of massive fraud," Trump told reporters at a White House event.

"Every Michigan registered voter has a right to vote by mail," Benson tweeted on Wednesday. "I have the authority & responsibility to make sure that they know how to exercise this right."

In a statement on Tuesday, Benson said sending mail-in applications to Michigan's registered voters would ensure their safety amid the coronavirus pandemic.

"By mailing applications, we have ensured that no Michigander has to choose between their health and their right to vote," she said. "Voting by mail is easy, convenient, safe, and secure, and every voter in Michigan has the right to do it."

Democrats have supported mail-in voting as a way to protect voters from potential exposure to the coronavirus, while Trump has frequently voiced his opposition to it, claiming that the ballots are riddled with fraud and are "corrupt."

The 2-trillion-U.S.-dollar bipartisan relief package that Trump signed into law in late March provides 400 million dollars for states to prepare for upcoming primaries and the November general election during the public health crisis.

"Last time I checked, the Constitution gives Congress the power to appropriate money, not you," she tweeted on Wednesday. "We provided $400 million to help states protect voters from this virus. A bill you signed! You can't take money back because you think you should be the only one allowed to vote by mail."

Trump's tweets came a day before his scheduled trip to a Ford manufacturing plant in Ypsilanti, Michigan, to highlight the company's efforts in manufacturing ventilators to help fight the coronavirus.