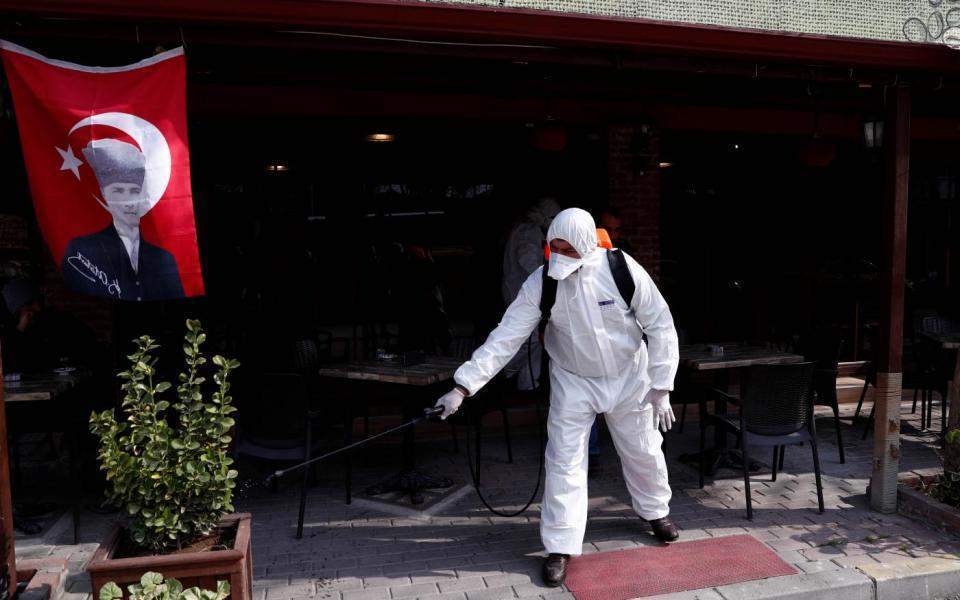 CAIRO, May 20 (Xinhua) -- Turkey's COVID-19 cases on Wednesday exceeded 152,000 as the daily number of new infections dropped below 1,000. Meanwhile, Iran witnessed a higher surge of coronavirus cases with the tally approaching 127,000.

The total number of COVID-19 cases in Turkey, the hardest-hit country in the Middle East, climbed to 152,587 after 972 new infections were reported, Turkish Health Minister Fahrettin Koca tweeted.

The death toll from the coronavirus in the country rose to 4,222 after 23 more fatalities were added in the past 24 hours, he said.

The country also reported 64 new deaths from the virus on Wednesday, raising the death toll to 7,183. A total of 98,808 coronavirus patients have recovered, with 2,673 still in critical condition.

On the same day, Iranian President Hassan Rouhani said that his country has got closer to the containment of the coronavirus pandemic in Iran.

"During these three months, we have been advancing step by step without a retreat. In general, we've made good progress in the face of this dangerous virus and are almost on the verge of containment," he said.

The United Arab Emirates (UAE) announced 941 new COVID-19 cases and six more deaths, raising the tally of infections to 26,004 and the death toll to 233.

The total number of recoveries from the virus in the UAE increased to 11,809 after 1,018 more fully recovered.

Israel reported six new COVID-19 cases, the lowest single-day rise in the country since March 7, bringing the tally of coronavirus infections to 16,665.

It is worth noting that the number of active cases in the country dropped to 2,812, the lowest since March 26.

Earlier on the day, beaches and places of worship were reopened in Israel, under distance restrictions and hygiene measures.

Egypt's coronavirus cases continued the surging trend to reach 14,229 after a daily record of 745 new infections were added.

The Egyptian Health Ministry also reported 21 more deaths and 252 cases of recoveries, increasing the death toll to 680 and the total recoveries to 3,994.

The North African country has received three batches of medical aid from the Chinese government to help its fight against the COVID-19 pandemic.

Oman's Ministry of Health announced 372 new cases of infections, bringing the total number of COVID-19 cases in the country to 6,043, including 29 deaths and 1,661 recoveries.

The country has received batches of medical aid from China and the support from a team of Chinese medical experts during their 50-day stay.

In Lebanon, the number of COVID-19 infections increased by seven to 961, while the death toll remained unchanged at 26.

In Jordan, a total lockdown will be imposed during Eid al-Fitr amid the unprecedented increase in the number of coronavirus cases over the past few days.

The country registered 23 more infections on Wednesday, bringing the total coronavirus cases to 672, including nine deaths and 446 recoveries.

The death toll of the pandemic climbed to 29 in different areas of the government-controlled provinces, including the southern port city of Aden.

So far, the pro-government health authorities have recorded five recoveries.

In addition, health authorities in the Yemeni Houthi rebel-held capital Sanaa has declared earlier a total number of four infections in northern Yemen, including one death.