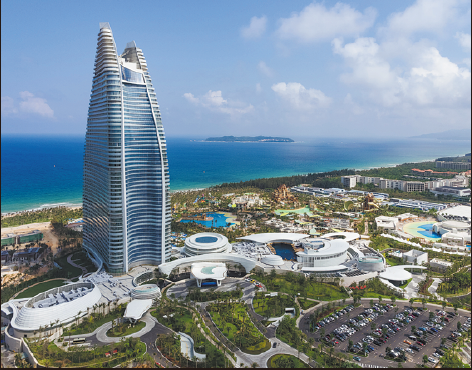 Editor's Note: With this year's two sessions starting-the annual meetings of the National People's Congress and the National Committee of the Chinese People's Political Consultative Conference-China Daily toured China to gather a series of stories focusing on the achievements and blueprints in various regions. They show how different regions find their own special strengths to achieve sustained economic development and integrated growth.

Many of the 24 NPC deputies and 19 CPPCC National Committee members from Hainan province are ready to give their input on the construction of a free trade port to further open the island province to the world.

The port, which covers the whole island, is a major national strategy promoted by President Xi Jinping in 2018 to underline China's commitment to expanding its opening-up and promoting economic globalization.

The annual session of the National Committee of the Chinese People's Political Consultative Conference starts Thursday, while the National People's Congress annual meeting is scheduled to start Friday.

The China (Hainan) Free Trade Zone General Plan, released by the State Council in 2018, said a free trade port will be established in Hainan by 2025 and aims to be operationally "more mature" by 2035.

The government plans to make Hainan, with its tropical climate and established tourist facilities, a key part of the 21st Century Maritime Silk Road and an important gateway to the Pacific and Indian oceans.

In a speech at the closing meeting of the third session of the sixth Hainan People's Congress held in January, Liu Cigui, head of Hainan's two sessions delegation and secretary of the Communist Party of China Hainan provincial committee, said that the CPC Central Committee had provided Hainan with all-around significant support in the past year.

He said the Hainan FTP has a major mission of promoting economic globalization and building a community with a shared future for mankind. Hainan will also strive to be a model of opening-up and cooperation.

Shen Xiaoming, governor of Hainan, said in a government work report to the third session that the priority this year is to push forward the construction of the Hainan Free Trade Port. When completed, it will be 32 times the size of Hong Kong's territory. Hainan will strive to have its overall plan for the free trade port issued as soon as possible and follow the central government's timetable and road map, Shen said.

All the proposals aim to promote the growth of the Hainan FTP to the highest level.

The Smart Hainan plan (2020-2025) was issued late last year by the provincial government. Its goal is to create a modern governance system and support the Hainan FTP in exploring high-quality international cooperation. The plan covers construction of submarine optical-fiber cables, the establishment of an offshore-data pilot area and building a Belt and Road international communications hub.

To better implement the plan, the deputies will ask for State support and guidance on the introduction of regulations covering cross-border data flows to allow business to be conducted in a legal and orderly manner.

Liao Hongyu, an NPC deputy and chief supervisor of HNA Airport Group and Haikou Meilan International Airport, said he will submit a proposal to promote the construction of a one-stop international aircraft leasing center and aircraft assets trading center in Hainan in the future.

"Hainan can learn from the experience of Ireland and Tianjin to build a new gathering place for the global aircraft leasing industry to promote optimization and upgrading of Hainan's modern service industry," said Liao, adding that he is optimistic about the province's development.

Shi Zongwei, a member of the CPPCC delegation and commissioner and Party chief of Haikou's customs, said his proposal focuses on improving the competitiveness of the aquaculture industry, strengthening agricultural science and innovation to cultivate new seed strains, and developing industry associations to enhance the international competitiveness of industries where China has an advantage. "Industry associations will play a positive role in promoting formation of the highest level of opening up in the Hainan FTP," he said.

Ken Chu, a member of the CPPCC National Committee and chairman and CEO of Mission Hills Group, who is specially invited from Hong Kong, will submit five proposals. A key concern is the adverse impact of the novel coronavirus outbreak on the tourism industry, which faces a long road to recovery.

Chu said his group will partner with international travel, sports and cultural brands to enrich the tourism sector and raise Hainan's global profile and influence.

The province has made solid progress in developing a world-class legal system and business environment over the past two years. The comprehensive opening-up will help launch construction of the free trade port, provincial government officials said.

An appraisal report by the Development Research Center of the State Council said 95 percent of the tasks set for the Hainan FTZ by the central authorities had been implemented, boosting confidence in all sectors and laying a sound foundation for accelerating construction of the Hainan FTP.

Since April 2018, thanks to the improvement of the business environment, the number of service trade entities grew by 58.9 percent in 2018 and 59.6 percent last year, the provincial government said at a news conference on Friday.

Hainan, which had 103 international air routes, has developed 87 service trade partners, and trade volumes with Hong Kong, the United States, Singapore, Ireland and Canada now account for 62.69 percent of the province's total service trade, officials at the news conference said.

In the past two years, Hainan has begun construction of 893 projects, with investment hitting 484.1 billion yuan, according to data from the provincial government.

In line with international standards, Hainan will formulate and implement an action plan to further optimize the business environment this year, Shen said.

More convenient entry and exit policies will be introduced for foreigners when appropriate, additional consulates will be opened, and offices of international organization will be encouraged to set up in Hainan, he said. An international commercial dispute resolution mechanism is also scheduled to be introduced this year.

President Xi Jinping unveils a plan to support building the whole of Hainan island into a pilot free trade zone and steadily into a free trade port with Chinese characteristics.

A guideline is jointly issued by the Central Committee of the Communist Party of China and the State Council to support Hainan's efforts to deepen reform and opening-up.

Patients at the Boao Lecheng International Medical and Tourism Pilot Zone are allowed to take home the latest medicines imported from overseas, a policy granted only to Hainan by the State Council.

Key industrial parks in Hainan are allowed to have independent management rights.