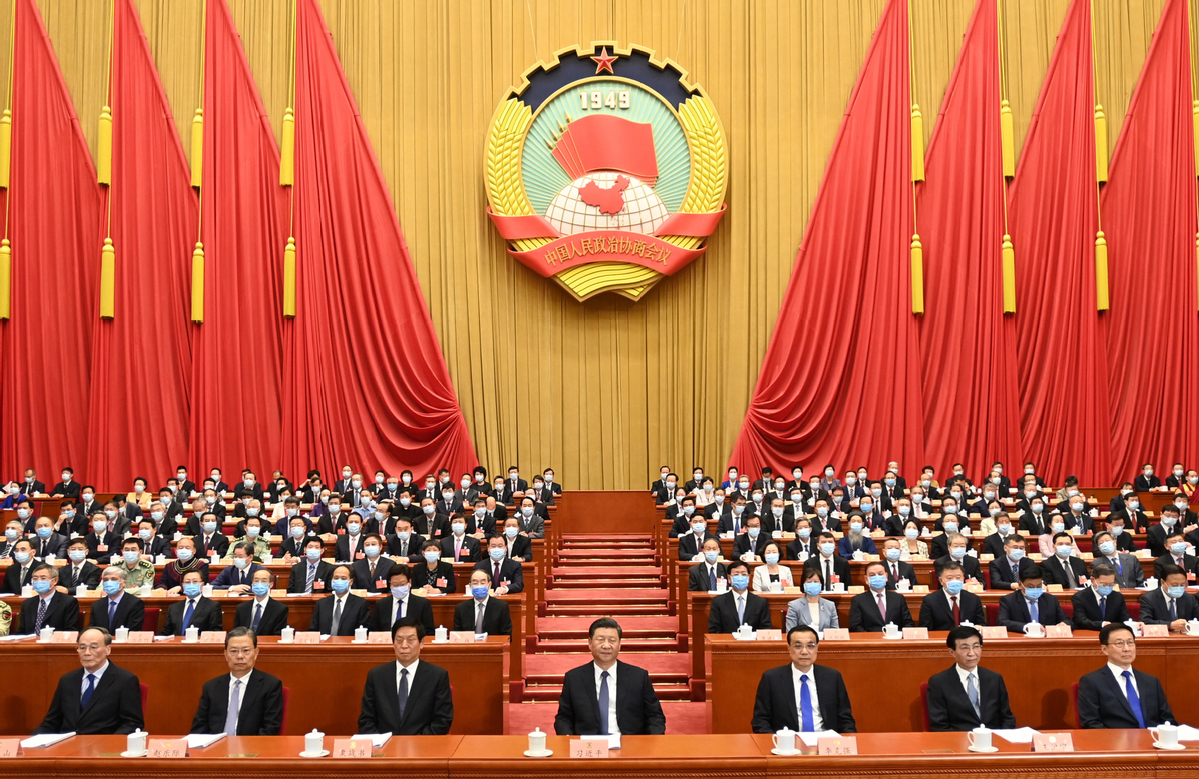 President Xi Jinping, who is also general secretary of the Communist Party of China Central Committee and chairman of the Central Military Commission, and other leaders attend the opening meeting of the third session of the 13th National Committee of the Chinese People's Political Consultative Conference on Thursday in Beijing. LI XUEREN/XINHUA

National political advisers have been urged to better fulfill their responsibility of pooling wisdom and building consensus to contribute to the undertakings of the country, especially given the current complex situation.

President Xi Jinping, who is also general secretary of the Communist Party of China Central Committee and chairman of the Central Military Commission, attended the opening meeting of the session with other leaders at the Great Hall of the People. The leaders, along with more than 2,000 CPPCC National Committee members, observed a minute of silence to pay tribute to martyrs and compatriots who lost their lives in the COVID-19 epidemic.

The session's agenda was reviewed and approved at the meeting.

While presenting a work report to the session, Wang Yang, chairman of the 13th National Committee of the CPPCC, noted the role of political advisers in the fight against the outbreak, saying that they have submitted more than 1,300 reports and suggestions on preventing and controlling the disease, resuming work and production, stabilizing public expectations and strengthening law-based governance.

Giving full play to role of the CPPCC as a specialist consultative body, 71 consultation meetings, 97 research trips and also online consultations were organized in the past year, he said.

Wang urged political advisers to uphold the Party's leadership and further strengthen fulfillment of their duty as the country works toward the goal of building a moderately prosperous society in all respects by year's end.

"We must make our common goals a source of momentum and guidance for our actions to build the greatest political consensus among the Chinese nation－to realize the Chinese dream of national rejuvenation," he added.

Wang urged political advisers to integrate efforts to build consensus in all activities, including inspections and visits, surveys and research, and consultations and deliberations.

Developing the CPPCC into a channel for addressing conflicts and achieving consensus relies on such methods as focusing on key, difficult issues, taking into account the needs of particular groups and adapting to the impact of the internet on how people think, he said.

Zhang Lianqi, a national political adviser, said Wang's elaboration on building consensus was enlightening. "The consensus we seek comes through providing inspiration, discussion and acknowledgment from the bottom of one's heart, and is a result of persistent efforts over the long term," he said.

The country needs more than ever to build consensus to meet the complex and severe challenges in this special period when epidemic control and economic and social development are urgent, he added.

Eliza Chan, a CPPCC National Committee member from the Hong Kong Special Administrative Region, said the SAR is facing grim circumstances in which various forces intervene in its affairs and destroy its stability."We should pool patriotic strengths to resist foreign forces and safeguard Hong Kong's prosperity and stability," Chan said.