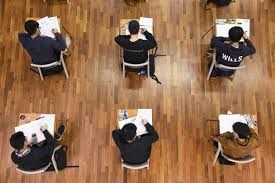 HONG KONG, May 23 (Xinhua) -- Canceling the question of the Hong Kong Diploma of Secondary Education (HKDSE) history examination that had serious faults in design was the only solution, Hong Kong's education chief said on Saturday.

Hong Kong's exam authority Friday announced the cancelation of the history question on the college entrance exam after it was widely condemned for misleading students about the history related to Japan's invasion of China during the first half of the 20th century.

Kevin Yeung, secretary for education of China's Hong Kong Special Administrative Region (HKSAR) government, told media on Saturday that it was unfair to grade candidates on a wrong question, and the most responsible way was to cancel it and score candidates according to their performance in other questions.

He believed that the exam authority has fully considered the impact on candidates before deciding to cancel the question.

The HKDSE exam had a question about whether Japan did more good than harm in China between 1900 and 1945, asking examinees to express and support their opinion taking reference to the two listed excerpts and their knowledge.

The question has aroused strong criticism in the society. The HKSAR government has investigated into the case and the HKSAR Chief Executive Carrie Lam has said the controversial question is a professional mistake and education cannot be without supervision.