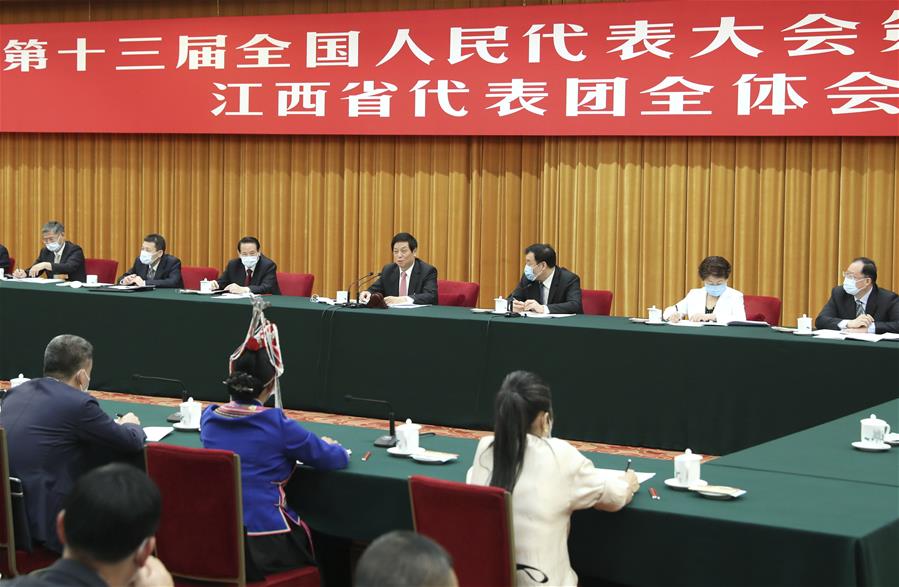 Li Zhanshu, a member of the Standing Committee of the Political Bureau of the Communist Party of China Central Committee and chairman of the National People's Congress (NPC) Standing Committee, joins deputies from Jiangxi Province in group deliberation at the third session of the 13th NPC in Beijing, capital of China, May 22, 2020. (Photo: Xinhua)

BEIJING, May 22 (Xinhua) -- Senior leaders on Friday called for more efforts to build a moderately prosperous society in all respects when attending deliberations at the third session of the 13th National People's Congress (NPC).

Li Zhanshu, Wang Yang, Wang Huning, Zhao Leji and Han Zheng -- members of the Standing Committee of the Political Bureau of the Communist Party of China (CPC) Central Committee -- all gave their complete support for the government work report delivered by Premier Li Keqiang at the session.

When joining deputies from Jiangxi Province in group deliberation, Li Zhanshu, chairman of the NPC Standing Committee, asked legislators to well deliberate and improve a draft civil code, which will be the first basic law defined as a "code" of the People's Republic of China once adopted.

He said establishing and improving the legal system and enforcement mechanisms for the Hong Kong Special Administrative Region (HKSAR) to safeguard national security is completely consistent with China's Constitution and the Basic Law of the HKSAR, and will be fully supported by all the Chinese people including the Hong Kong compatriots.

Wang Yang, chairman of the Chinese People's Political Consultative Conference National Committee, told deputies from Sichuan Province to counteract the impact of COVID-19 and ensure a victory in the fight against poverty.

Wang Huning, a member of the Secretariat of the CPC Central Committee, underscored efforts to promote the coordinated development of the Beijing-Tianjin-Hebei region, boost the development of the Xiongan New Area and make good preparations for the 2022 Winter Olympics, when participating in deliberation with deputies from Hebei Province.

While deliberating with deputies from Heilongjiang Province, Zhao Leji, secretary of the CPC Central Commission for Discipline Inspection, stressed strengthening supervision over the implementation of major decisions and arrangements.