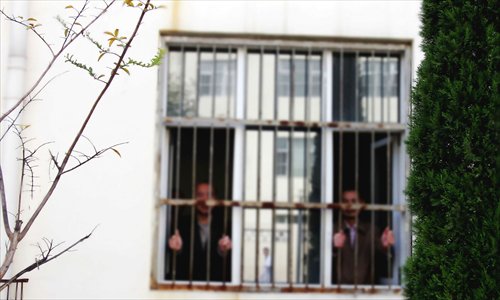 Two patients stare out of room at a mental hospital in Yuncheng, Shanxi Province on October 16, 2014. (Photo: VCG)

NPC Deputy Hu Meiying, from East China's Jiangxi Province, will submit a joint motion calling for adjustments to the amendment and said there had been incidents of people with mental disorders hurting others across the country and their mental conditions were previously unknown.

The NPC passed China's first-ever mental health law in 2002, establishing the principle of free will for mental patients' hospitalization, but excluded patients who were prone to violence.

Overemphasizing the "principle of free will," which seemed to protect patients' rights, could aggravate their conditions without sufficient and timely treatment, Hu told the Global Times on Thursday.

"This threatens the patients' safety, their families, and society," Hu said.

Problems also exist in regional governments that either can't or are reluctant to manage local mental health patients and provide them with proper treatment, Hu added.

Hu and the other deputies have suggested a reporting system that would require medical institutes to record and report to the government information on confirmed cases that involve those suffering from mental disorders in a timely fashion.

Also, a level-to-level management system should be implemented at mental health institutes to receive and treat patients based on their conditions, severity, and threat levels, the motion said. "Institutes that reject the patients can be punished," it added.

Chinese media reports on mental patients hurting or killing people are not rarely seen. On May 6, a mentally deranged man reportedly hacked a six-year-old girl to death in East China's Shandong Province. A few days earlier, a man with a history of psychiatric treatment hurt 11 people with a kitchen knife in Central China's Hubei Province.

Hu's motion has won wide applause on Chinese social media. A Weibo user said amending the law "is necessary" as he had seen some cases where people had "avoided legal liability after killing others and using a mental disorder as an excuse."

"Severe mental patients should stay at hospitals for treatment instead of hanging outside like a 'time bomb,'" said another Weibo user.

Lawyer Li Qinbin said he supports the motion. "I also suggest the patients' information be reported to related government departments or institutions," Li told the Global Times, adding that families who conceal patient conditions should be responsible for any harm and damage they cause.

Zhang Bo, who is also an attorney, said the motion could conflict with the original purpose of the Mental Health Law - to protect the privacy and free will of mental patients who had received or were undergoing hospital treatment.

"If the law is amended, I'm afraid power would be abused by regional governments who enforce it, which could hurt the patients' rights," Zhang said.

Instead of directly amending the law, Zhang feels the health authority could issue policies and regulations to help manage the patients better, especially those with a higher propensity for violence.