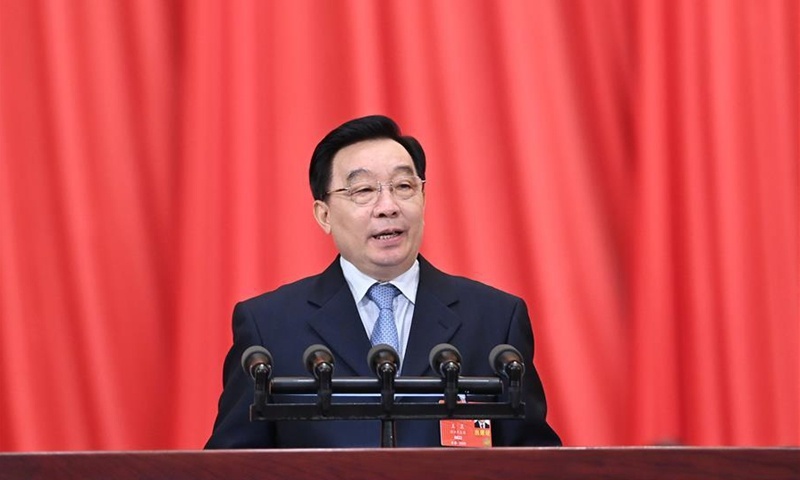 Wang Chen, vice chairman of the Standing Committee of the National People's Congress (NPC), speaks at the opening meeting of the third session of the 13th NPC at the Great Hall of the People in Beijing, capital of China, May 22, 2020. (Photo: Xinhua)

After a draft decision on establishing and improving the legal system and enforcement mechanisms for the Hong Kong Special Administrative Region (HKSAR) to safeguard national security was submitted to China's top legislature on Friday, the work of formulating the national security legislation would be accelerated, which would be signed into the law as early as in the coming weeks considering the urgency, some national lawmakers, top political advisors and lawyers said, as the central government prepared to set up national security agencies in Hong Kong to enhance information collecting and evidence to deal with acts like splitting the country, subverting state power, organizing and perpetrating terrorist activities.

Wang Chen, vice chairman of the National People's Congress (NPC) Standing Committee, explained the draft decision to the NPC deputies at the third session of the 13th NPC, outlining the necessity and importance of formulating the law to defend the sovereignty and core interests of the country.

Though he did not reveal detailed articles for the upcoming legislation, Wang addressed some of the most worrisome issues about the SAR, which have been posing severe risks to the overall national security of China, delivering key messages about what the new national security law for Hong Kong will include.

After the issuance of the decision, the NPC Standing Committee would work with related parties to formulate relevant laws and bills which usually go through three readings in the committee before being put to a vote, according to the Legislation Law. Chinese lawmakers usually meet every two months, while interim meetings can be held when there is a special need, leading to speculation the draft decision would be signed into law within six months, or even sooner.

"As far as I know, the legislation is ready, which will be passed in the next meeting of the NPC Standing Committee," Kennedy Wong Ying-ho, a member to the National Committee of Chinese People's Political Consultative Conference (CPPCC) and solicitor at the Supreme Court of Hong Kong, told the Global Times on Friday.

After the lawmakers vote on all resolutions, the draft Civil Code, and the draft Hong Kong national security law on May 28, the NPC Standing Committee could hold interim meetings to sign the bill into law, Wong noted.

The draft decision empowers the NPC Standing Committee to add relevant laws to Annex III of the Basic Law governing the SAR.

Given there is no specific organ in today's Hong Kong to handle intelligence work, especially counter-terrorism intelligence, after the Special Branch of the Hong Kong Police was disbanded before Hong Kong returned to the motherland, it's highly necessary to establish a specific organ to deal with matters relevant to national security in the face of an increasingly complex geopolitical environment, some lawmakers noted.

"National security matters are tackled in a highly professional scope, and ordinary police officers or government officials do not have specific means, for example, investigation measures," Wong said, noting that the central government's special agencies to safeguard national security are likely to set up branches in Hong Kong to do relevant work.

Witman Hung Wai-man, the principal liaison officer for Hong Kong at the Shenzhen Qianhai Authority and a Hong Kong deputy to the NPC, told the Global Times that such a branch should be granted the power to investigate and enforce the law, and it remains to be seen if it is fully independent or put under a certain organization, and the new agency can be set up under the HKPF.

To propose such a law for Hong Kong aims to not only tackle the chaos in Hong Kong, but also respond to security threats in the SAR to the country, Lau Siu-kai, vice president of the Chinese Association of Hong Kong and Macao Studies, told the Global Times on Thursday, noting that while the riots continue in Hong Kong and the US increases its efforts to contain the Chinese mainland, Washington's intention of using Hong Kong as a pawn to counterbalance China has become increasingly palpable.

The central government has zero tolerance toward any activities challenging the bottom line of the "one country, two systems," and it would not allow any act of secessionism, according to the draft document.

The delayed passage of Article 23 of the Basic Law is widely believed to have become a major factor that has led to relentless radical protests in the city since last year, which has engulfed the once-prosperous Asian financial hub and plunged it into long-term recession.

Horace Cheung Kowk-kwan, a member of the Legislative Council of the Hong Kong SAR, told the Global Times Friday that setting up national security branches is something completely new to LegCo and Chief Executive Carrie Lam may gather LegCo members to deliberate further moves. He said relevant Hong Kong authorities, especially the Security Bureau, will work closely with mainland counterparts.

He said Hong Kong members of the Basic Law committee and the SAR government will give out suggestions with regard to the draft of the national security law.

Cheung told the Global Times that the SAR government will continue pushing for Article 23 legislation.

Given the legislation would be a national law, it can be written into the regulations that establish a central-level national security mechanism, noted Li Xiaobing, an expert on Hong Kong, Macao and Taiwan at Nankai University in Tianjin. In the future, if Hong Kong enacts Article 23 of the Basic Law on its own, it will hopefully form a "double-level" system to safeguard national security in Hong Kong, he said.

Under the new Hong Kong national security law, it won't be bringing relevant suspects or personnel back to the mainland for investigation and interrogation as some people think. It's about designing a mechanism to enforce the law in Hong Kong while considering both the Basic Law and local laws, Li said.

Akin to stagnated relevant laws to Article 23 due to sabotage and obstruction by those trying to sow trouble in Hong Kong and Chinese mainland at large, pan-democracy protesters and legislators in Hong Kong are mulling new protests to defy the legitimacy of the legislature, as online calls have been made for fresh protests on May 27 when the debate on the Chinese anthem bill resumes.

Anonymous organizers on social network groups on Telegram are now preparing for anti-government protests on June 4 and July 1, which would mark the so-called anniversaries of fighting the government. Some foreign media claimed that the central government risks new protests by imposing a security law, as some activists consider the law an erosion of the high degree of autonomy of the SAR and "one country, two systems."

Exercising a high degree of autonomy in Hong Kong means the city enjoys independent executive, legislative and judicial power including that of final adjudication, which is in accordance with the provisions of the Basic Law. In accordance with the Basic Law, those who violate the Hong Kong national security law would be prosecuted by Hong Kong's Department of Justice, Wong noted.

"I'm not worried about the judges, as they have to strictly follow the articles of the law, and proceed and rule on cases based on evidence," he said.

Since the beginning of the year, some former and current public security officials told the Global Times they have been aware of an apparent shifting strategy in the central government's governance on Hong Kong affairs.

"The country explains principles and the bottom line in a clearer way compared to previous years," former secretary for security Lai Tung-kwok and a member of the CPPCC National Committee, told the Global Times, expressing confidence in the HKPF in more effectively handling riots and illegal activities in the near future by enhancing intelligence work.