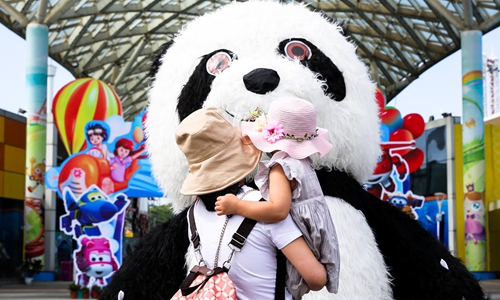 A young mother holds her child and interacts with a staffer dressed as a giant panda at Happy Valley Wuhan on May 19, 2020, the first day of the theme park's reopening as the COVID-19 epidemic ebbs in Wuhan, Central China's Hubei Province. (Photo: Global Times)

Coming from Wuhan, capital of Central China's Hubei Province which was the hardest-hit place by the coronavirus outbreak in China and having been deeply feeling the impact of the global health crisis, Hu Zhongjun, a political advisor, brought a proposal to this year's two sessions, in which he suggests that the country establish a "new" pilot free trade zone in Hubei to help the province recover from the epidemic.

"Hubei, an important transportation hub, is home to many key industries such as automobile manufacturing, electronic information, new materials and biomedicine. Setting up a new free trade zone will not only promote the province's development, but also provide experience for the whole country," Hu, President of Hubei Socialist College and a member of the Chinese People's Political Consultative Conference National Committee, told the Global Times.

"Some economists have suggested that this is the future development direction of the domestic pilot free trade zone. Zero tariffs could be conducive to reducing the cost of enterprises and absorbing global investment in Hubei. Zero barriers could benefit industries with long industrial chains, such as logistics, air transport, warehousing services," Hu said.

Based on the plan, the Wuhan area focuses on the development of a new generation of information technology, life and health, intelligent manufacturing and other strategic emerging industries.

Hu specifically pointed out that the automobile industry, which has been stricken severely by the epidemic, will benefit from the new free trade zone.

As Hubei gradually returns to normalcy, Wuhan is also mulling a slew of measures to accelerate its revival.

Under the aegis of the Wuhan Natural Resources and Planning Bureau, the city has formulated a post-epidemic recovery scheme.

With five significant aspects of medication and healthcare, emergency and disaster prevention, smart community, healthy city, and economic revival, the scheme is designed to accelerate the strengthening of the city's weak points, enhance its foundation and bolster confidence.

Lü Bin, vice director of the Urban Planning Society of China and a professor at the College of Urban and Environmental Sciences of Peking University, who was one of the experts who participated in the consultation of the plan, told the Global Times on Friday that "Wuhan's development was quite good before the epidemic compared to other areas, but the sudden public health crisis exposed the weakness of the governance of the Chinese city. The incident caused people to reflect."

The details of the scheme will be laid out in six three-year action plans, including the improvement of medical and health facilities; upgrading urban and rural communities, sanitation facilities and emergency support; improvement of the ecology and functional quality; integrated transportation and emergency logistics, and construction of functional and highlighted areas.

The upgrading of health facilities is the top priority, Lü said. Wuhan will further optimize the layout of the city's hospitals, increase a certain number of general hospitals and hospitals for infectious diseases, comprehensively improve the standards of health care facilities and services at the community level, and establish a three-dimensional network of emergent first-aid stations covering urban and rural areas.

The city will also hasten the construction of 5G base stations in a bid to realize the full coverage of 5G networks by 2021.